Washington: Chocolate milk has become the latest US culture war battleground, as debate rages over the dairy drink’s place on school cafeteria menus.

After divisions over cancel culture in universities, book censorship in schools, and critical race theory in the classroom, students’ diets have become a political pressure point, pitting Democrats against Republicans, the dairy industry against vegans, and mums and dads against education authorities. 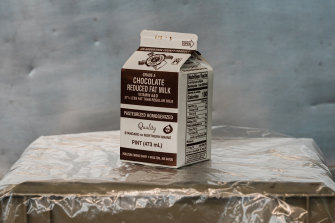 The epicentre of the food culture wars is New York City, where health-conscious Mayor Eric Adams wants chocolate milk scrapped in schools because of its sugar content, and has previously posted instructional videos urging parents to give their children more water instead.

“Should we have chocolate, high-sugar milk in our schools?” Adams, a Democrat, mused in January after being elected to City Hall.

“Now, I’m not going to become nanny mayor. But we do need to have our children have options.”

Chocolate milk has been a bugbear for Adams, a self-declared “imperfect vegan” who sometimes eats fish but never dairy.

In an instructional video posted in 2019 when he was New York’s Brooklyn borough president, Adams backed a Department of Education proposal to ban the drink from schools, telling his community, “instead of serving our children beverages that set them up for a lifetime of health problems, we should be encouraging them to drink more water”.

Three years later – and now with the power to make the city’s policies – his office has not ruled out revisiting the idea of a ban, sparking concern among New York farmers.

Parental choice is a dominant theme in this year’s midterm elections, so some members of Congress have thrown their weight behind proposed new laws to stop school authorities from banning flavoured milk.

Republican congresswoman Elise Stefanik, an ally of former president Donald Trump, has introduced a bill that would require all schools participating in the National School Lunch Program to offer students at least one flavoured milk option or risk losing federal funding. 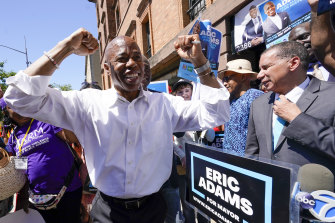 “Instead of taking away milk choices from students, my bill will give them better access to essential dairy nutrients critical for their development,” Stefanik said in a statement. “Let our New York students drink chocolate milk!”

The lunch program provides low-cost or free lunches to about 30 million American children. Stefanik said her bill, known as the Protecting School Milk Choices Act, would preserve the right of students to have chocolate milk while also protecting dairy farmers from future bans in New York, which is one of the largest dairy states in the nation.

Republicans don’t have the majority in the House of Representatives, and therefore any bill put forward by the party’s members would require Democrat support.

However, a bipartisan congressional group of New York politicians also wrote to Adams, urging the mayor to keep chocolate milk in New York school cafeterias and warning that “for many NYC families, the meals children receive in schools are their only source of many recommended nutrients”. 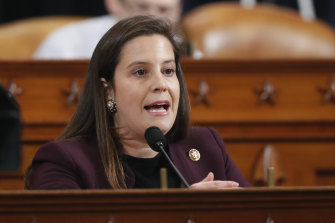 “Cow’s milk is already high in natural sugar. In fact, it has 8½ times more sugar than soy milk. So adding further sugar to give to children is completely irresponsible, given the epidemics of obesity and type 2 diabetes,” said Josh Cullimore, the director of preventative medicine at the Physicians Committee for Responsible Medicine, which promotes a plant-based diet.

“Dairy products are also the number one source of saturated fat in the US diet, which is known to cause heart disease and Alzheimer’s disease.”

Former Olympic cyclist Dotsie Bausch, co-founder of the anti-dairy lobby group Switch4Good, presented this argument to members of Congress during a trip to Washington last week when she lobbied for subsidised soy milk in schools. At present, students who do not want a dairy milk product as part of their lunch must have a note from their doctor or a parent.

The chocolate milk debate is only one of the politically heated disputes about parental rights in the lead up to the midterms.

The Florida legislature recently passed a Parental Rights Education Bill, which LGBTQ activists have dubbed the “Don’t Say Gay” bill, as it would limit what some classrooms can teach about sexual orientation and gender identity.

And school libraries across the country have been forced to remove books about race and sexuality that some parents and conservative groups find too “objectionable” for students.

If New York City were to ban chocolate milk, it would follow in the footsteps of Washington and San Francisco. Los Angeles also banned chocolate milk about a decade ago but reversed the policy a few years later amid a public backlash.