The number of rough sleepers falls for the first time since 2010 but more than 4,600 people still slept on the street in England in 2018, new figures reveal

More than 4,600 people slept rough on the streets of England last year, according to official figures released today after the UK had its coldest night of the winter.

Local authorities estimated around 4,677 people slept rough on a single night last autumn, according to data from the Ministry of Housing, Communities and Local Government (MHCLG).

Despite the fall across England, London saw a 13 per cent increase with 1,283 sleeping on the streets. 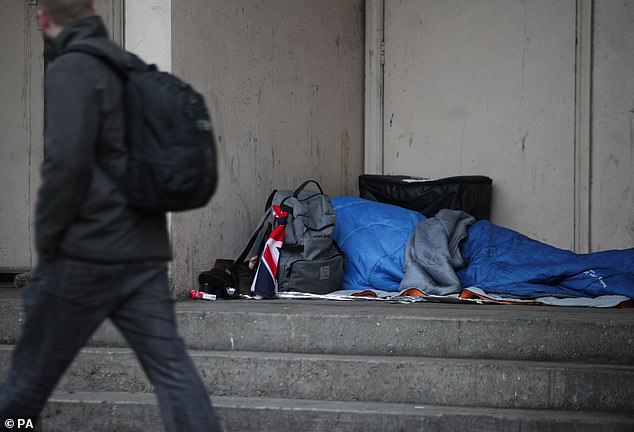 More than 4,500 people slept rough on the streets of England last year, according to official figures released today after the UK had its coldest night of the winter

The data came as the capital felt temperatures as low as minus 6.4C overnight, and the Met Office warned temperatures could remain below freezing across the country during the small hours into next week.

Charities seized on the rise since the turn of the decade, with Centrepoint head of public affairs Paul Noblet warning there are ‘many more hidden homeless people’ in unsafe accommodation.

Crisis chief executive Jon Sparkes said the scale of rough sleeping is a ‘damning reflection on our society’ as he urged the Government to tackle the root causes.

Polly Neate, chief executive of Shelter, said: ‘The combination of spiralling rents, a faulty benefits system and lack of social housing means the number of people forced to sleep rough has risen dramatically since 2010.

‘We welcome many of the things which the Government has been doing to seek to improve services for rough sleepers – and numbers do now seem to be stabilising, which is a rare piece of good news – but without fundamental action to tackle the root causes of homelessness these measures will only achieve so much.’ 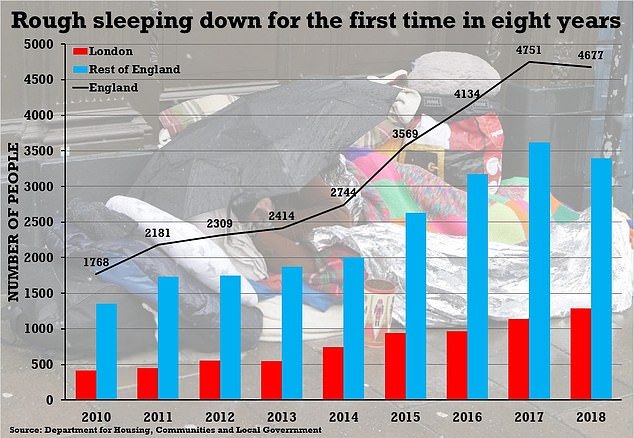 Communities Secretary James Brokenshire celebrated the drop as a success for the Government strategy backed by nearly £100 million of investment.

‘The number of vulnerable people sleeping on our streets has now fallen for the first time in eight years,’ he said.

‘But while these figures are undoubtedly a step in the right direction, I do not underestimate the task ahead in achieving our ambition of eliminating rough sleeping altogether by 2027.’

But shadow housing secretary John Healey said the ‘desperately disappointing’ figures underestimate the reality, urging ministers to do ‘much more to make good the huge damage done over the last eight years’. 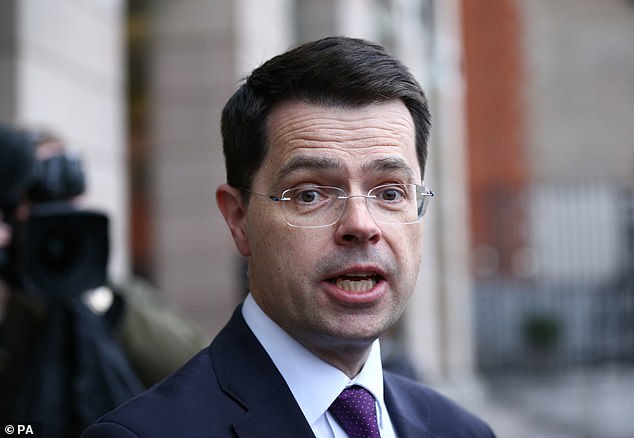 ‘This new count shows that rough sleeping has more than doubled since 2010, but even these figures mask the true scale of the problem, as the Government’s numbers are well known to be flawed and a massive undercount of the true level of rough sleeping,’ the Labour MP added.

The MHCLG acknowledges that the data is ‘subject to some uncertainty’ and warned that some rough sleepers ‘may be missed’ because of practical difficulties.

These include people bedding down at varying times across large areas and the availability of spaces in night shelters and the weather.

The difficulty in measuring the scale of the problem was shown in a separate study published on Thursday by the Combined Homelessness and Information Network.

Outreach workers recorded 3,289 people staying on London’s streets between October and December, a 25% increase on the same period last year.

The Government had the London figure at 1,283 in its study between the months of October and November.