Potato chips, Nutella and even Peeps can step into this campfire classic, but success lies in its balance of flavors and a healthy char.

Send any friend a story

As a subscriber, you have 10 gift articles to give each month. Anyone can read what you share. 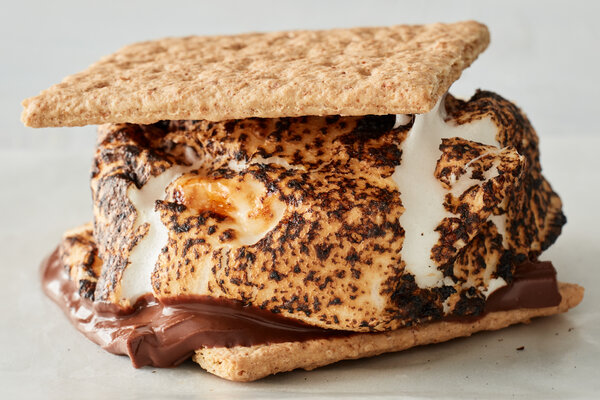 The campfire s’more is a gooey mess: saccharine, certainly, but also sentimental, stuffed with childhood memories.

“When you get older, you still love them,” said Kena Peay, a cook who shares her hiking and camping recipes on social media. “But then you’re like, ‘Uh, this kinda could be improved.’ ”

Beloved for its simplicity, a s’more is best known as a roasted marshmallow and a piece of bar chocolate sandwiched between graham crackers. But, really, the perfect campfire s’more is one you enjoy. For some, that can be a roasted Peep with a Reese’s cup tucked into two gingersnap cookies. The potential for customization is endless.

The s’more’s origins are as hard to pin down as its oozing center. The first published recipe is often attributed to the 1927 guidebook “Tramping and Trailing With the Girl Scouts,” where it appears under the name “Some More.” But a similar recipe for “Campfire Marshmallow Graham Cracker Sandwich” from the marshmallow brand Campfire can be found in a recipe leaflet that Michigan State University dates to 1924. And a year later, The Norwalk Hour newspaper wrote of the introduction of “some-mores” to Girl Scouts at Camp Andree, about 30 miles north of New York City.

Roasting marshmallows around a fire had, by then, long been fashionable (the confection became commercially available in the United States in the early 1900s). “Marshmallow parties are coming into favor,” The New York Times reported on July 6, 1902, adding that partygoers would “build fires and toast marshmallows, and occasionally, it is said, burn their fingers.”

These days, iterations on the s’more abound, on blogs and cookbook pages and restaurant menus. In New York City alone, you can dig into an ice-cream-stuffed frozen s’more at Dominique Ansel Bakery in SoHo, a s’mores-inspired chocolate cake at Speedy Romeo in Clinton Hill, Brooklyn, “Grahammaster Fluff” ice cream at The Social and campfire s’mores at Olmsted, both in Prospect Heights, Brooklyn.

Around a wood-burning fire, preparations vary from camper to camper. According to Lauren Reichstein, manager of camp and adventure programs for the Girl Scouts of Middle Tennessee, the ultimate s’more starts with not one, but two marshmallows. (You could, of course, opt for a single jumbo marshmallow instead.)

At the Wharf, on the Potomac River waterfront in Washington, s’mores aren’t just for summer. Ingredients are sold year-round out of a vintage airstream trailer called Camp Wharf, set next to a firepit where diners can then roast them. Bob Rubenkonig, the executive director of the Wharf — and whose colleagues have designated “the unofficial s’mores counselor” — holds his marshmallow over the fire, out of reach of the flames, and roasts it for three to four minutes, rotating, until it has a thoroughly softened center.

To Megan McDuffie, who runs the camp-cooking blog Fresh Off the Grid with Michael van Vliet, the key to the perfect s’more is all in slow roasting. They believe that toasting a marshmallow should be an exercise in patience.

But Greg Baxtrom, the chef at Olmsted and a former Boy Scout, just goes for it.

“Despite my rigid culinary profession, I am more of a ‘Just stick it in the fire until it burns and blow it out’ kind of guy,” he said.

At Olmsted, the toastiness of the marshmallow is up to customers, as they’re equipped with coffee cans of coals for tableside roasting. Mr. Baxtrom’s s’mores kits feature what he calls “cheffy graham crackers” and “cheffy marshmallows,” but he says his customers have drawn the line at the chocolate, preferring Hershey’s bars over any confections made in-house.

“It never fully, completely melts, which drives me absolutely nuts,” Ms. Peay said of bar chocolate. She’s experimented with Hershey’s Kisses, finding that they succumb to the marshmallow’s residual heat better than bar chocolate does, but ultimately prefers to spread Nutella onto her graham cracker for even distribution.

The graham cracker needs all the help it can get, after all.

By design, graham crackers don’t provide much in the flavor department, serving simply as sugar shuttles to hungry mouths. So consider a base like a saltine or a Ritz, which can keep the s’more out of cloying territory, countering all that sweetness with a touch of saltiness. And for real salt fiends, there’s Dan Whalen’s preferred base: a ruffled potato chip.

“Sometimes graham crackers, after sitting out for a minute, can be instantly soggy or stale,” said Mr. Whalen, a food blogger and the author of “S’mores!: Gooey, Melty, Crunchy Riffs on the Campfire Classic.” The potato chip, he added, gives it “a little more crunch.”

And for graham-cracker haters with an insatiable sweet tooth, Ms. Peay offers this suggestion: Cut a Rice Krispies Treat into two thinner planks for even more marshmallow flavor and crunch.

While just about everything in a s’more can be tweaked, there’s one nonnegotiable — making memories in the warmth of a roaring fire alongside people you adore.

“You are with your friends, maybe you don’t have your shoes on, you have your feet in the grass,” Mr. Whalen said, “and there’s a lot to remember about the moments.”