London: Prince Harry has moved to shield the Queen and Prince Philip from the fallout of bombshell allegations that a senior member of the royal family expressed concern about how dark his baby’s skin would be.

American talkshow host Oprah Winfrey said Harry wanted it known that the 94-year-old monarch and her 99-year-old husband were not who his wife Meghan, the Duchess of Sussex was referring to during Sunday night’s tell-all interview. 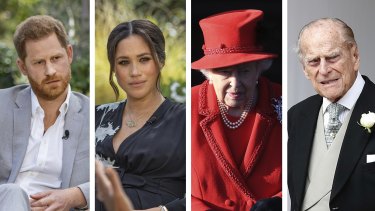 Prince Harry and Meghan, the Duchess of Sussex, say the Queen and Prince Philip were not responsible for the remark.Credit:AP/Getty

Ruling out the Queen and Prince Philip will focus attention on other members of the family like Prince Charles and his wife Camilla, the Duchess of Cornwall, Prince William and Catherine, the Duchess of Cambridge, or the Queen’s other three children and their sons and daughters.

Charles’ biographer Jonathan Dimbleby told the BBC that he did not believe the heir to the throne would have ever said it.

“I know him. I’ve know him for a long time. I have never seen a hint of that,” Dimbleby said.

“He is someone whose professional [and] personal life has been dedicated to bringing people together, not pulling them apart.”

Buckingham Palace has made no comment about the interview.

Prime Minister Boris Johnson was asked about the racism allegation at a press conference but declined to get involved.

“Perhaps the best thing I can say is that I’ve always had the highest admiration for the Queen and the unifying role she plays in our country and across the Commonwealth,” he said.

In new developments, previously unaired footage from the interview shows Harry claiming that the Queen gets “really bad” advice, and complaining that his family had “sadly” contacted the couple to apologise for anything that may have contributed to their decision to split from the monarchy in January 2020.

“The feeling is that this was our decision, therefore the consequences are on us,” he said.

“I am part of the system with them – I always have been. But I’m very aware that my brother can’t leave that system but I have.”

Asked whether William wanted to leave too, Harry said: “I don’t know, I can’t speak for him.”

Meghan’s surprise claim that she and Harry had been secretly married by the Archbishop of Canterbury Justin Welby three days prior to their May 2018 wedding extravaganza also prompted questions on Monday about the legality of the ceremony.

“We called the archbishop, and we just said, ‘Look, this thing, this spectacle is for the world, but we want our union between us’,” Meghan told Winfrey. She claimed the service took place with “just the two of us in our backyard with the Archbishop of Canterbury”. 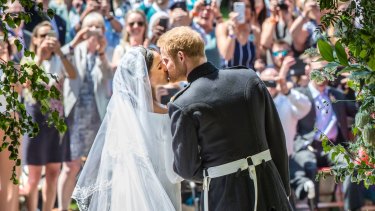 Meghan claimed the public extravaganza of May 2020 was not the couple’s “real” wedding.Credit:AP

However a marriage must be solemnised by a member of the clergy in a church, or in a place specified in a special licence such as a cathedral, a chapel or hospital and in the presence of two witnesses. It is not known whether the small service was a legally binding marriage as Meghan suggested in the interview.

Welby’s office was inundated with requests to provide an explanation but declined.

Royal reporters also questioned Meghan’s claim that Kensington Palace and Buckingham Palace did not defend her against negative press coverage, noting they had received many calls from media officers to correct the record or advocate for the royal couple.

American network CBS released a cache of fresh clips on Monday that were not included in the final two-hour special. There are nearly two more hours of footage that did not make it to air.

In one clip, the prince revealed the Queen had invited him and Meghan to see her at Sandringham Estate during negotiations in January 2020 about their intention to leave the royal family, but were later told they could not go.

The Queen’s private secretary told Harry the monarch was “busy, she’s busy all week”. Harry said he phoned his grandmother but she said there was “something in my diary that I didn’t know I had”.

“I said, ‘What about the rest of the week?’ and she said, ‘Oh that’s busy now as well’. I thought OK, I didn’t want to push as I kind of knew what was going on.”

When a bemused Winfrey asked why the Queen couldn’t do what she wanted, Harry replied: “When you’re head of The Firm there are people around you that give you advice.

“And what has also made me really sad is some of that advice has been really bad.”

The Firm is a term used to describe the administrative operation of the royal family, particularly the private secretaries, equerries and senior staff who control logistics and protocol.

Harry told Oprah in the new footage that racism contributed to his and Meghan’s decision to leave Britain. He recounted a conversation with an unnamed media identity who warned him about underlying racism in Britain.

“He said, ‘you need to understand that the UK is very bigoted.’ And I stopped and I said, ‘the UK’s not bigoted – the UK press is bigoted, specifically the tabloids. Is that what you mean?’

“And he goes, ‘no, the UK’s bigoted.’ And I said, ‘I completely disagree.’ But unfortunately if the source of information is inherently corrupt or racist or biased, then that filters out to the rest of society.”

“It is really sad to see the family in turmoil like this. The issues that Meghan has raised of racism and mental health are really serious issues,” he said.

“It is a reminder that too many people experience racism in 21st-century Britain. We have to take that very, very seriously.

“This is bigger than the royal family. For too many years we have been too dismissive and too willing to put these issues to one side.”

Zac Goldsmith, Johnson’s minister for the Pacific and climate, said on Twitter that Harry was “blowing up his family”.

If you or anyone you know needs support call Lifeline on 131 114, or Beyond Blue’s coronavirus mental wellbeing support service on 1800 512 348.