He has also given up booze and confesses he reads ancient Greek poetry before bed. 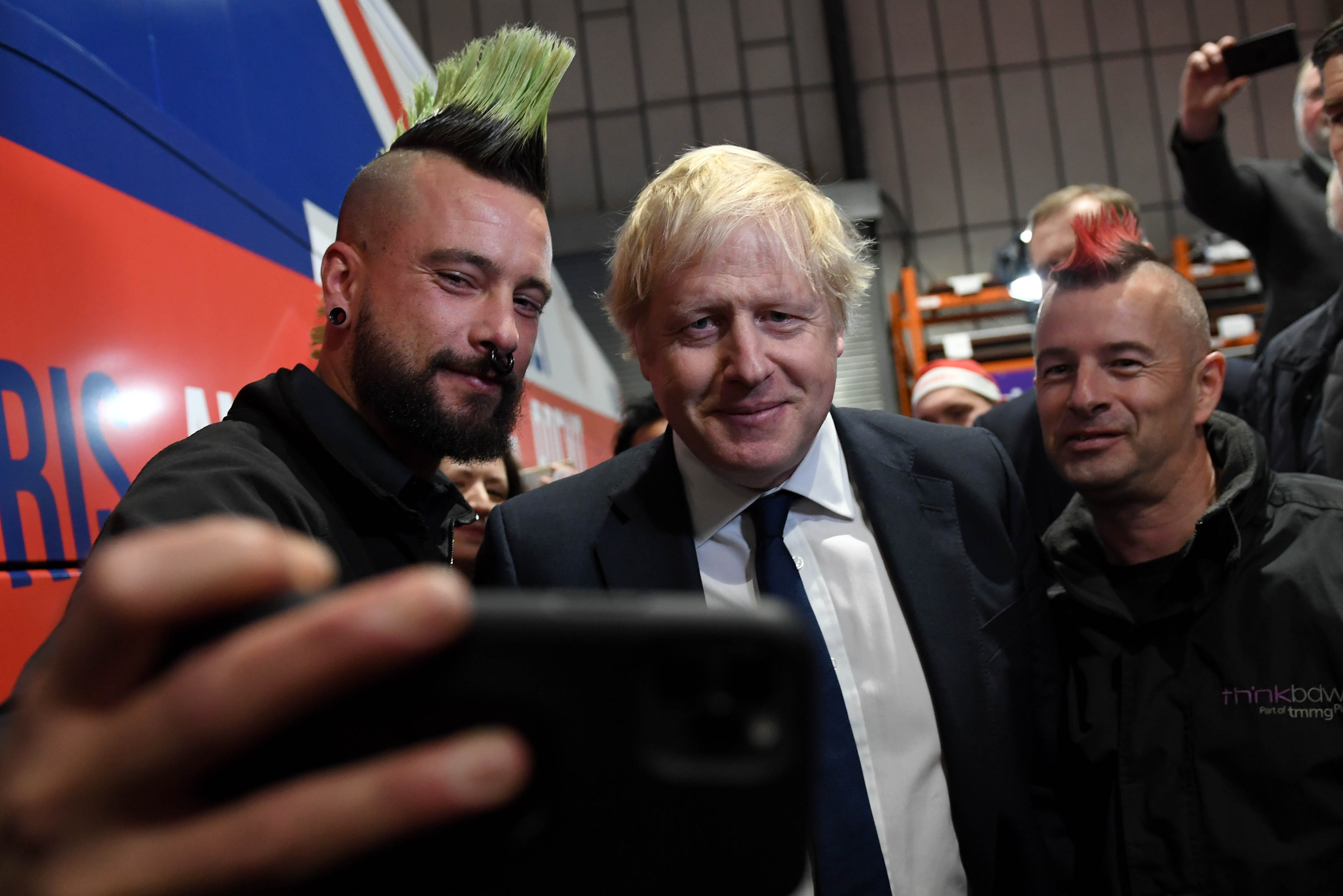 The Sun spent a full day on the campaign trail with the PM, as he criss-crossed the country in a bid to whip up votes.

For our Day in the Life video diary, Mr Johnson confided about everything from organising a Nato summit to the personal abuse he gets from actor Hugh Grant.

On December 12, Mr Johnson will either get majority he craves to deliver Brexit, or be the second shortest-serving PM in history. With so much at stake, he packs in as much as he can to his breakneck daily campaigning schedule:

6.10am: Boris walks Jack Russell Dilyn then eats a large bowl of porridge at the flat he shares with his girlfriend Carrie Symonds at No11 Downing Street.

After breakfast he takes his first phone calls from four key aides and swaps text messages with confidante Cabinet ministers. 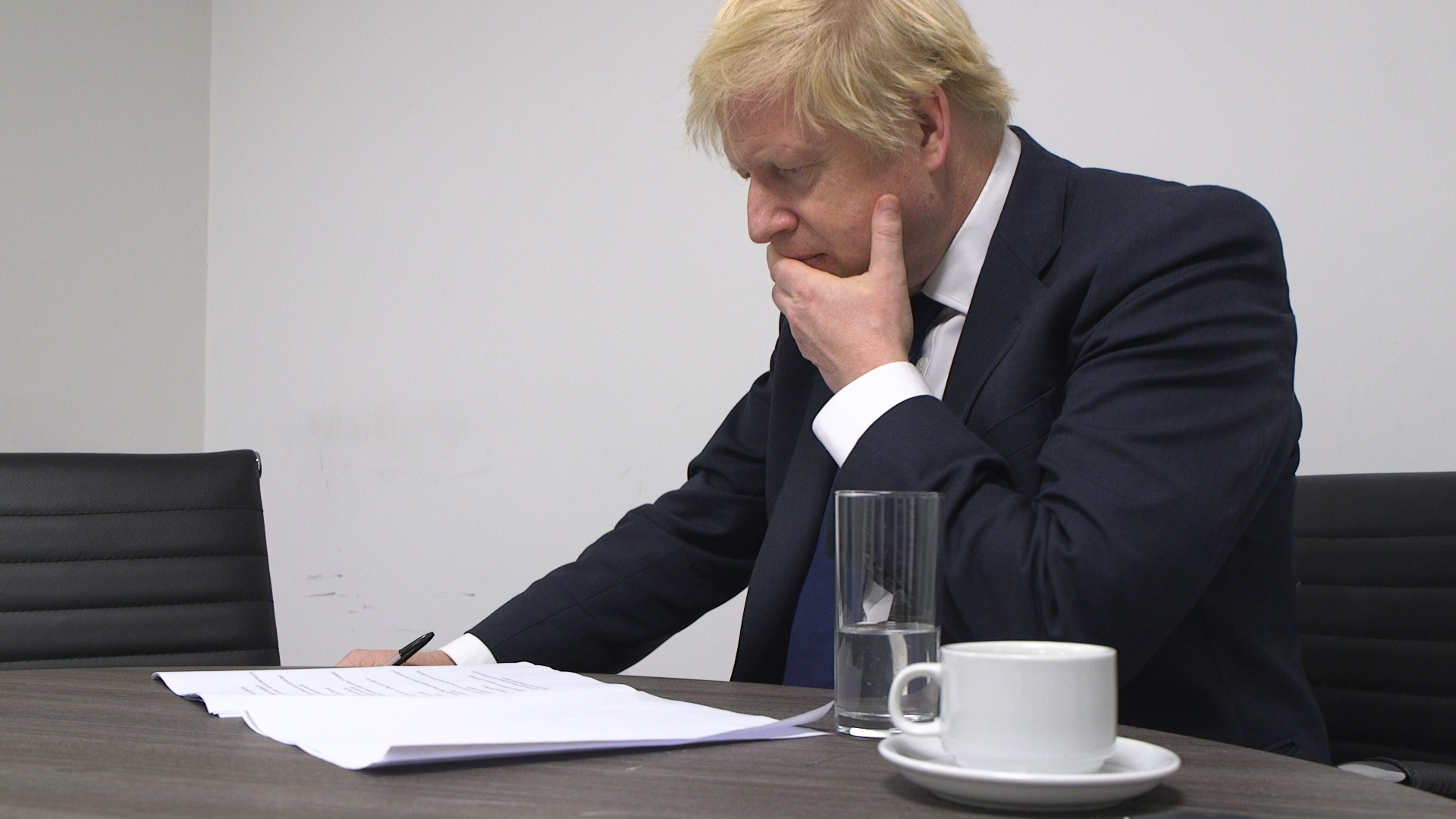 8am: He leaves leaves Downing Street for the nearby Conservative HQ. Election campaign director Isaac Levido has been at his desk from 5am and briefs Mr Johnson on daily tactics to attack Labour.

11am: A motorcade rushes the PM across central London so he can attend a vigil for the victims of the London Bridge terror attack. He is joined by Home Secretary Priti Patel, London Mayor Sadiq Khan and Labour leader Jeremy Corbyn.

The morning’s campaign schedule was ripped up to allow politicians to pay their respects.

11.35am: An 81-mile dash down the M3 to Southampton. The PM’s motorcade drives at high speed, bumper to bumper, repeatedly accelerating and braking heavily. But Mr Johnson insists he never gets car sick, saying: “I’m really too busy writing speeches, or thinking about the next thing.

“Those guys on the motorbikes are brilliant though, what they do to get us through traffic fast. I do feel a bit ashamed sometimes, but it is essential. You just need to get from A to B fast.” 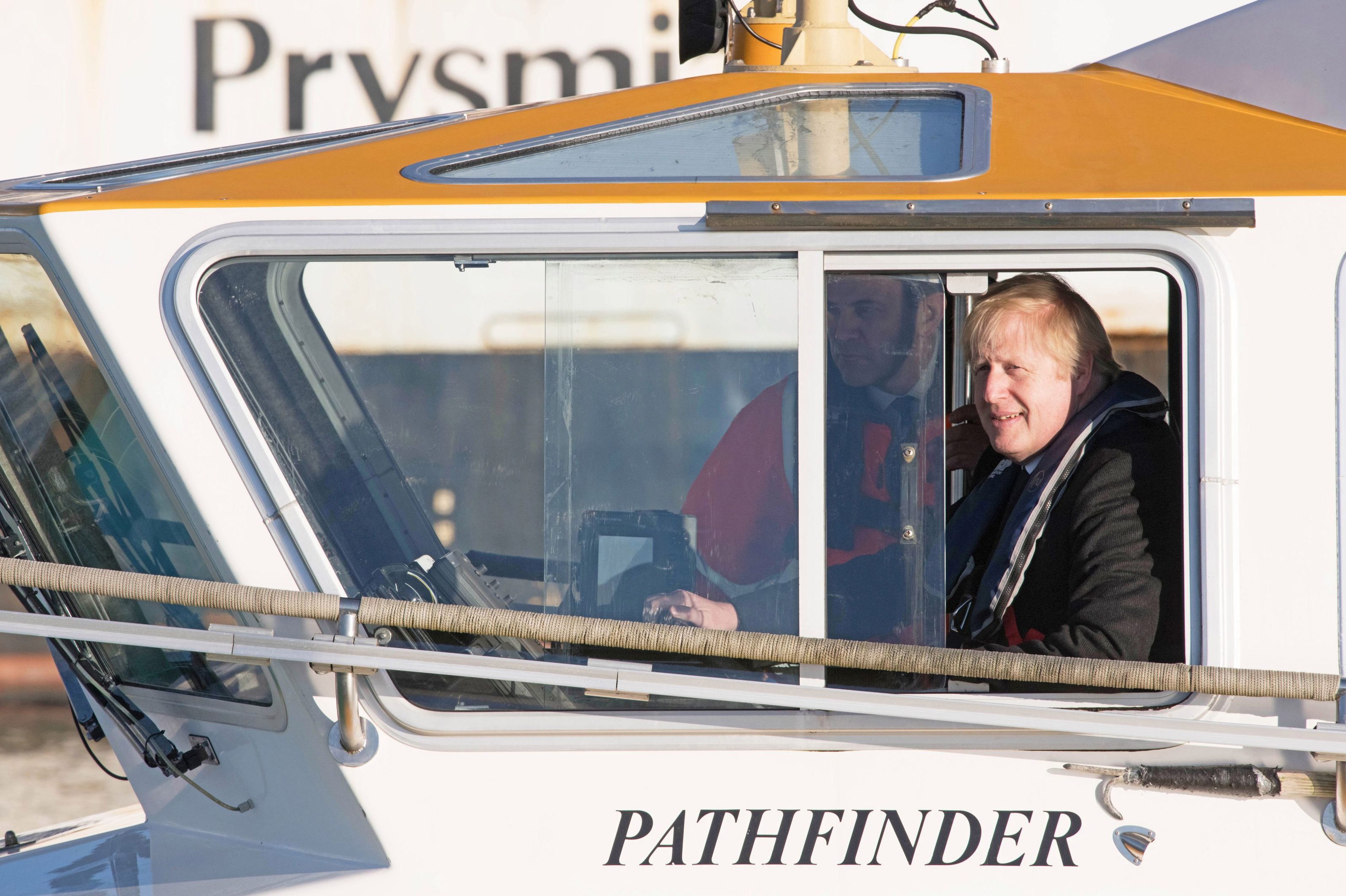 1.10pm: A tour of Southampton’s port taking in the control room and dockside where he meets workers, then out in a patrol boat to inspect ships at berth. Southampton Itchen is a key marginal, which the Tories held by just 31 votes in 2017.

Boris says he “loves getting out”, and takes every opportunity he can to promote Brexit. He declares: "When a big ship comes into this port, they make no distinction whether it comes from the EU or anywhere else in the world.

“The procedures are exactly the same. It just goes to show that some of the anxiety about leaving the EU is very often overdone”.

2.45pm: A round of local and national TV interviews. Campaign chiefs ensure he does this every day to dominate the news cycle. Mr Johnson faces questions on the London Bridge horror and pro-Remain actor Hugh Grant, campaigning for Lib Dems.

How does he feel when Grant, who played the Prime Minister in Love Actually, says the election is “a national emergency” and a Tory majority would be “catastrophic”?

Boris insists: “Water off a duck’s back. Of course a lot of people care very strongly about Brexit. I make an exception for the gentleman you mention, but most people I meet are frustrated about the paralysis in Parliament”. 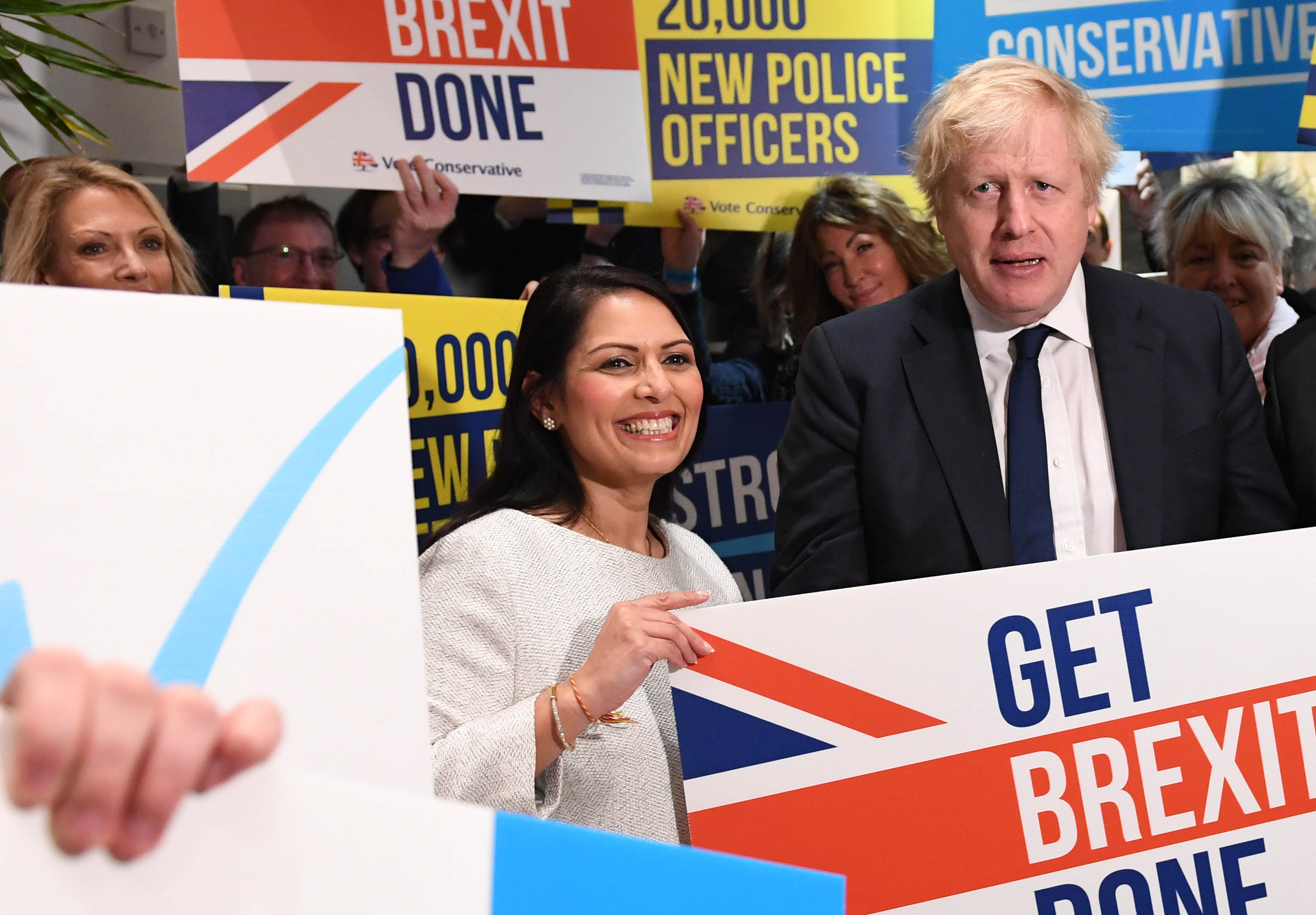 3.10pm: Before returning to London, the PM is briefed on the day’s developments for the Government. A senior No10 official always accompanies him on campaign trips in case there are any urgent decisions which need to be made. How does he handle constantly spinning all those plates?

Boris explains: “I find it constantly stimulating. Obviously there is a different level of focus. Some of the geopolitical stuff does require a different tone and a different pitch. But what you’re really doing is trying to bring people together”.

5.15pm: Boris is back at Tory HQ in Westminster, for a meeting with senior Government officials about the upcoming Nato summit which Britain is hosting.

He sees his job this week as both cheerleader and peacemaker and says: “Some people want to chip a bit of paint off Nato every now and then. Not everybody in France has been an uncritical admirer, so we have to show why it works.” 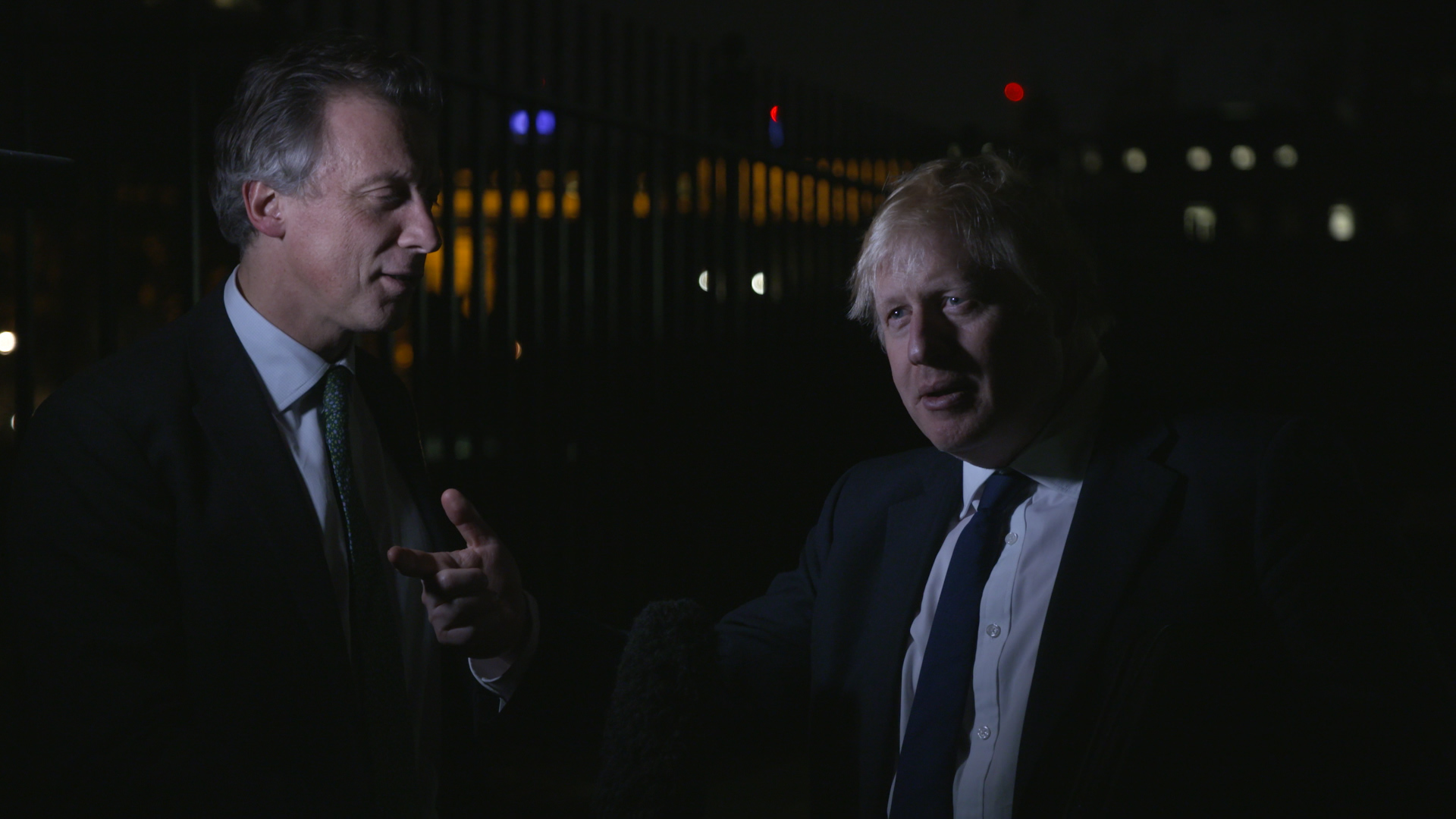 6.10pm: The PM’s motorcade heads 68-miles to Colchester, where he will address a Tory rally. He has been at it for ten hours. How does he keep going?

The PM admits: “I sometimes succumb to flapjacks, which are not medically recommended. And I seem to be able to drink an unlimited amount of coffee without impeding my ability to sleep at the end of the day.”

He insists that he seldom tires, describing himself as “hard as nails” and built from “steel springs”. Mr Johnson adds: “I have a lot of energy. I think it’s genetic.”

8.35pm: Traffic out of London is heavy and Boris is late for the rally at a Colchester printworks. Adoring party members cheer and laugh at his regular jokes. How does he pump himself up?

Boris says: “I have a huge sense of responsibility for getting this right. This is it. There is a very short time left. There is a very real risk of another hung Parliament”. On the way out two workers with mohicans, accost him for a selfie.

10.20pm: His armour-plated Jaguar pulls up at the back entrance of No11 and Boris is home. What does he do to relax in those few moments before bed?

He gives an embarrassed giggle: “A few quadratic equations, and a bit of Greek lyric poetry. Nothing complicated. It’s a terrible confession but I do. Everybody should”. Most might pour a stiff drink but Boris insists his self-imposed booze ban is still firmly in place.

He insists: “I’ve had to wet my whistle three times in this campaign but I will not swallow. I can’t. We have to get Brexit done, unleash the potential.” He turns and says: “Night night, see you.”