If the United Nations were a stock or an index fund, you might want to short it.

Founded in 1945 to "maintain international peace and security," the UN in recent years has been powerless to stop slaughter in Syria, Yemen and Myanmar.  Civil conflicts are nearing post-Cold War highs. The number of displaced people has hit a new record. After decades of improvement, more of the world's poor are going hungry. 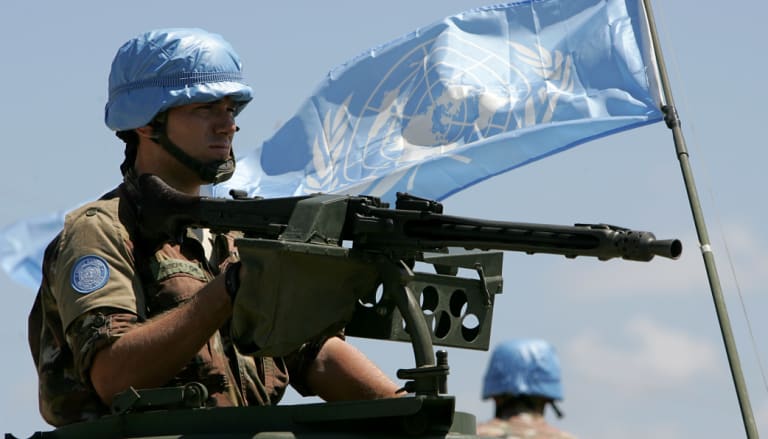 An Italian soldier arrives in the Lebanese port city of Tyre on a UN peacekeeping mission in 2006.

The gap between what the UN seeks and receives for humanitarian relief is greater than ever. Gridlock at the Security Council is worsening. The organisation's biggest shareholder, the US, is withdrawing its support, creating an opening for a takeover by powers with decidedly illiberal interests.

Yet the UN is still necessary – far too necessary to be written off. From the spread of weapons of mass destruction to the threat of climate change, the range of perils that no one nation can counter has greatly expanded since the UN was established. The test facing those gathered for this year's General Assembly is as pressing as it is daunting: to make the UN fit for purpose in an era of surging nationalism and mounting geopolitical tensions.

Seen from today, former US president Harry Truman's pronouncement that it might take 80 years for the UN Charter to remake world affairs seems a trifle optimistic. As Stewart Patrick of the Council on Foreign Relations put it: "The United Nations has been in crisis for much of the time since its founding."

For much of the Cold War period, the UN was splintered by veto wars between the US and the Soviet Union in the Security Council. The US victory in the Cold War sparked giddiness even among UN skeptics like former president Ronald Reagan, who spoke of "a standing UN force – an army of conscience – that is fully equipped and prepared to carve out humanitarian sanctuaries through force if necessary." 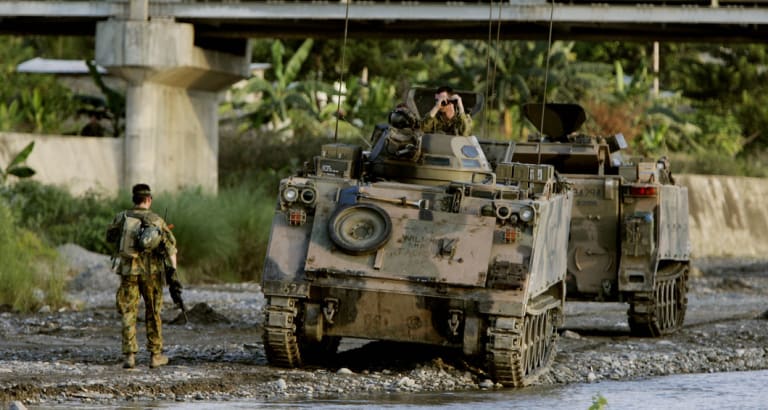 Australian soldiers on patrol in Dili, East Timor in 2006.

Ambitions for the body expanded. Even the disasters that befell missions in Somalia, Bosnia and Rwanda didn't damage the enthusiasm. The Security Council has authorised more than 50 peacekeeping operations since the fall of the Berlin Wall, compared with fewer than 20 over the previous four and a half decades.

Today's geopolitical landscape threatens to turn back the clock. Last year saw the greatest number of vetoes in the Security Council since 1989, mostly over Syria. Before that, there were differences over Libya and Russia's annexation of Crimea.

In recent years, China – the second largest contributor to peacekeeping and to third highest budget donor – has become more willing to deploy its veto. China's efforts to defend its interests in the crisis over North Korea, Russia's recalcitrance on Syria, and Saudi Arabia's proxy war in Yemen are efforts to reshape UN diplomacy. And that's to say nothing of the growing assertiveness of regional powers old and new such as India and Ethiopia.

This competition is taking place on a new strategic landscape. Cyberspace has opened up a virtual arena for everything from espionage to political interference. Criminal syndicates that traffic in weapons, minerals, drugs and migrants have stoked violence and corruption in fragile states. Jihadist groups have made conflicts more violent and harder to resolve. The number of civil wars has almost tripled in the past decade.

Even as the UN successfully ends some peacekeeping missions, such complicating factors will make others harder to wind down. The average age of the 14 missions now in place, involving some 103,000 personnel, is 26 years.

And then there's Donald Trump. His US administration poses the greatest challenge of all.

Trump has ended US support for the UN Population Fund and backed away from the Paris accord on climate change, the UN-led Global Compact on Migration, UNESCO, and the UN Human Rights Council. He also dumped the Iran nuclear agreement that Security Council members fashioned and UN agencies had monitored. Congress restored many of his cuts to US support, but this month Trump terminated aid to the UN agency for Palestinian refugees. 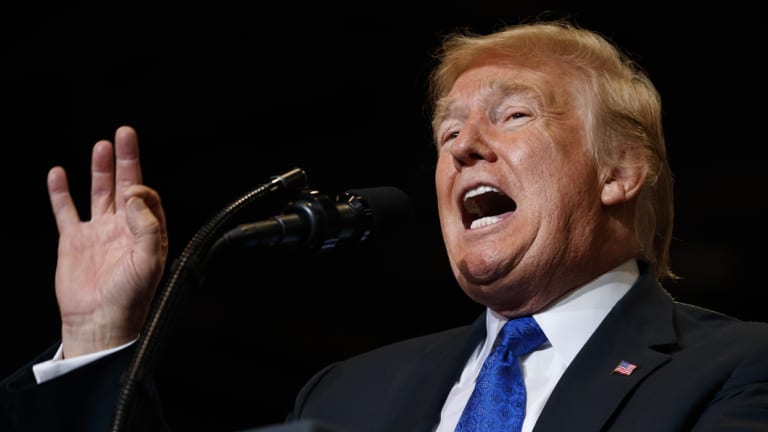 US President Donald Trump’s isolationist agenda poses a risk to the future of the United Nations.

The US has legitimate complaints. As the UN's biggest funder, it is right to demand accountability. In 2017, its obligatory contribution of 22 per cent of the regular UN budget amounted to $US611 million. In all, the US provides about $US10 billion in assessed and voluntary support for UN agencies. Under the current formula, some 30-odd of the world's poorest countries pony up a mere $US25,000 a year – a fraction of what might pay for their presidential limousines.

There's no denying that the UN has been plagued by corruption and mismanagement. Its bodies often seem to devote more effort to debating Israel's sins, real or imagined, than the crimes of egregious offenders. And biting the US hand that feeds them comes far too naturally to many of the General Assembly's members. 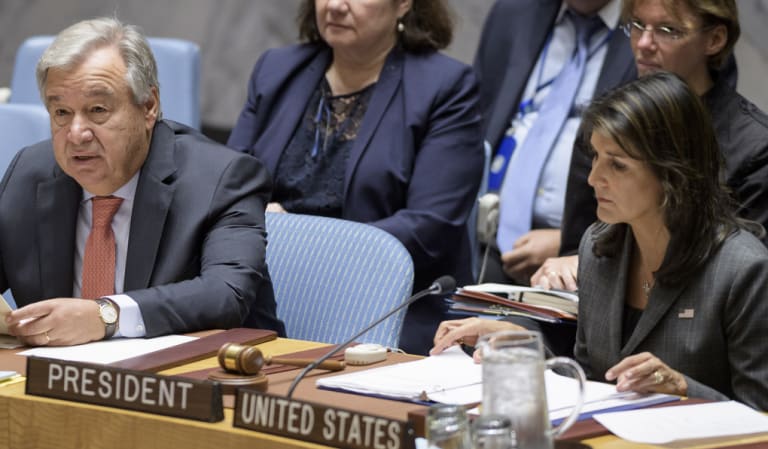 Productive engagement is the answer. US Ambassador Nikki Haley was right, for instance, to shine a light on UN peacekeeping operations. But the US administration is increasingly inclined toward unproductive disengagement.

Consider the US decision to withdraw from the Human Rights Council. The US had curbed the council's anti-Israel bias, supported investigations into human rights abuses in numerous countries, brought attention to discrimination against gay and transgender people, and broke up anti-Western voting blocs.

The argument that by withdrawing from the council, the US denies it legitimacy is beside the point. By the same logic, you might as well walk away from the General Assembly. After all, Freedom House rates more than half the world's nations "not free" or only "partly free," and says that trends are heading in the wrong direction. If you support human rights and political freedom, this is a bad time to admit defeat. 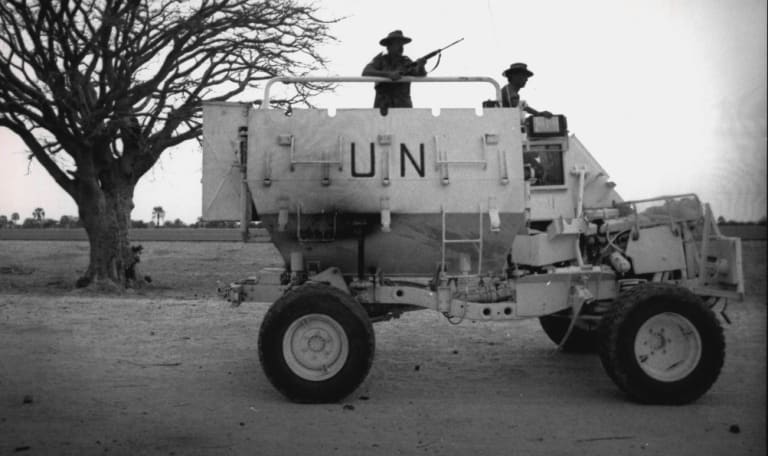 Members of Australia’s UN contingent patrol the Namibian countryside in 1989 during efforts to help the country transition to independence.

Haley has proposed linking US aid to votes in the General Assembly. Sheba Crocker, a vice-president at CARE USA, says that would be "counterproductive, with potentially disastrous unintended consequences."

Foreign aid amplifies US soft power and yields votes in the UN system. Issuing public threats can make it harder to do deals behind closed doors. Jeffrey Feltman, a former US diplomat who served as the UN's undersecretary-general for political affairs from 2012 to 2018, sees a darker motive behind the anti-UN bluster: "Instead of trying to find common ground, they're intentionally throwing things down to try to antagonise the UN, to try to show how unreasonable they think the organisation is."

A US retreat from the UN would be UN Secretary-General António Guterres's worst nightmare.

A former prime minister of Portugal and UN High Commissioner for Refugees, he's liked by UN critics and defenders alike. He's cultivated ties with Haley, and done his best to stay out of range of Trump's tweets. His proposals for UN reform are bolder than those of his two predecessors and dovetail in many areas with US priorities, including tackling bureaucratic inefficiencies. 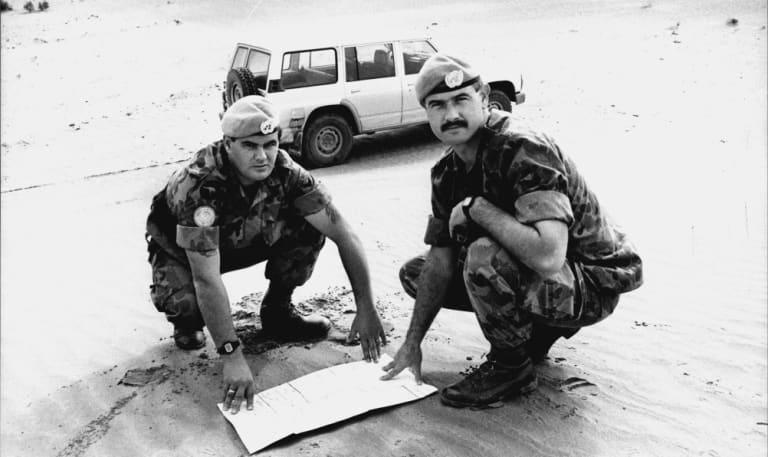 Corporal Greg Scanlon and Sergeant Paul Goodridge were part of a 40-strong Australian Army contingent that provided communications to nearly 3000 UN soldiers from over 30 countries in Western Sahara in 1991.

But this congruence of interest seems unlikely to keep Trump's pugilistic instincts in check. Guterres appears to recognise this. His latest idea for taming those impulses is to warn that the US withdrawal from the UN is creating a vacuum that China is moving to fill.

You might wonder, would that be so bad? China is stepping up in UN peacekeeping, providing relatively well-trained and well-resourced troops. Last year, it moved with new speed in the Security Council to support sanctions on North Korea for its nuclear and missile programs. It has championed the fight against climate change, a cause that has amplified its influence. Its financial role in the UN is growing, and with that is coming greater interest in how the money is spent. That could bolster institutional reform.

But while it's one thing for China to put more peacekeepers in the field, it's another for China to push in UN budget deliberations for fewer human rights observers in peacekeeping missions. The last thing the UN needs is a stronger illiberal axis, led by China and an increasingly disruptive Russia. Illiberalism is on the rise in many parts of the world – including, for instance, in the European Union, where until recently one would not have expected it to pose a threat.

If Guterres hopes to keep such forces at bay, he needs to do what he can to keep the US engaged. That gives him little choice but to appease his US tormentors by making a more visible effort to trim the bureaucracy and cut red tape. He could also push for a new formula that increases the contributions of its least well-off members and gets them more invested in the UN's effectiveness. Increasing the scrutiny of UN peacekeeping missions, winding down the failures and holding national detachments more accountable are also on the cards.

The good news is that Trump's posture has few admirers. In many cases, other Western countries have stepped in to increase their role. In 2019, Germany will join the council, along with Indonesia and South Africa. It says it expects to play a more prominent role and will work with France to preserve multilateralism.

The best way to preserve multilateralism is to show that it can deliver results. For all the flaws of the United Nations as an institution, that task remains the responsibility of its members. Last year, they joined forces at the Security Council to meet the threat posed by North Korea to peace and security, pushing it to the negotiating table – exactly the kind of situation that the UN was designed to handle.

They need to bring the same resolve and cooperation to confront the existential threat of climate change, and other collective challenges such as fighting terrorism, managing migration and curbing disease and environmental degradation.

The still-unfolding backlash against globalisation and the return of geopolitical competition will make meeting such challenges harder. All the more reason for governments to direct and empower the UN to step up. One of history's most painful lessons is that failure to agree on how to solve a problem doesn't make it go away.