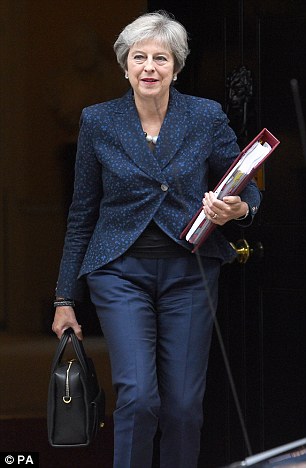 Theresa May has broken her silence on the speculation swirling around Boris Johnson’s political ambitions – by slapping down the former Foreign Secretary for his blistering attack on her Chequers agreement.

The Prime Minister uses a BBC interview to condemn Mr Johnson for his remarks in last week’s Mail on Sunday, when he likened her Brexit plan to a ‘suicide vest around the British constitution’.

Mrs May implies that Mr Johnson’s comments, which triggered a political storm, showed he was unfit for the highest office.

‘I have to say that that choice of language is completely inappropriate,’ she says.

‘I was Home Secretary for six years and as Prime Minister for two years now, I think using language like that was not right and it’s not language I would have used.’

She also expresses her frustration at the plotting against her on the Tory backbenches. Asked if she would reassure her party that she is not determined to go ‘on and on’ as leader, she replies: ‘I get a little bit irritated but this debate is not about my future. This debate is about the future of the people of the UK and the future of the United Kingdom.’

In the interview, to be broadcast tomorrow night, Mrs May is asked by former BBC political editor Nick Robinson whether she is still the ‘bloody difficult woman’ referred to by former Tory Chancellor Ken Clarke. 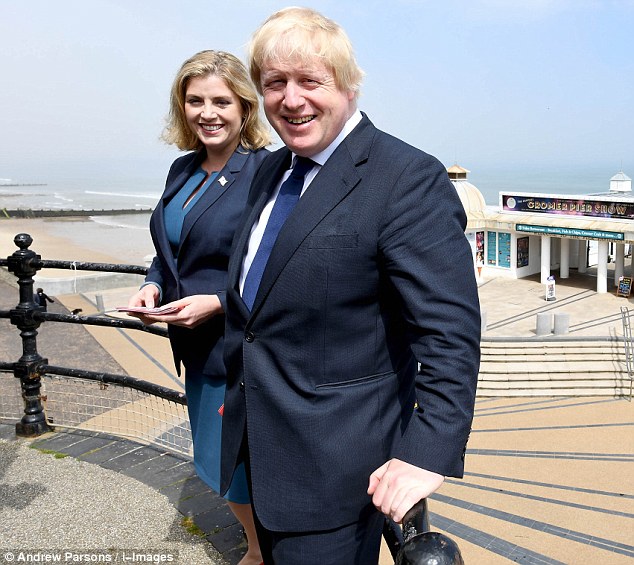 The Prime Minister uses a BBC interview to condemn Mr Johnson for his remarks in last week’s Mail on Sunday, when he likened her Brexit plan to a ‘suicide vest around the British constitution’ (pictured campaigning for Vote Leave in 2016)

Mrs May’s remarks come after a week in which Tory MP members of the Brexiteer European Research Group openly discussed removing Mrs May in order to kill off her Chequers plan, which would leave the UK tied to many Brussels rules indefinitely.

The uncertainty over Mrs May’s future as she nears the crunch point of the Brexit negotiations has led to intensive jostling behind the scenes as the main contenders ‘wargame’ possible outcomes. 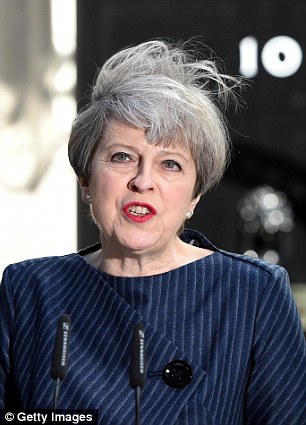 Mrs May implies that Mr Johnson’s comments, which triggered a political storm, showed he was unfit for the highest office

One Tory source compared the potential leadership line-up to the Grand National. ‘Everyone and his grandmother is planning to run,’ the source said.

Allies of Mr Johnson – who claimed last night that his critique of Mrs May’s plan was ‘not about changing Prime Minister, it’s about chucking Chequers’ – are already sizing up potential running mates, with fast-rising star Penny Mordaunt at the top of their wishlist.

The International Development Secretary and Equalities Minister, who has been tipped to run for the leadership in her own right, is a pro-Brexit Navy reservist who came to public prominence in the ITV diving show Splash!, in which she painfully belly-flopped in front of millions of viewers.

Shortly afterwards, she attracted further attention by delivering a speech in the Commons on the welfare of poultry, which she admitted had been made with the sole purpose of uttering the word ‘cock’ in order to win a dare.

Mr Johnson’s recent marriage split, amid speculation about his relationship with Tory aide Carrie Symonds, has convinced some allies that a joint ticket with a popular female politician is the best way to neutralise the political damage.

Another running mate being considered by the Johnson camp is former Home Secretary Amber Rudd, who has already worked closely with Lynton Crosby– the Australian election strategist who is professionally and personally close to Mr Johnson – over the battle to hang on to her ultra-marginal Hastings constituency. Mr Johnson’s recent marriage split, amid speculation about his relationship with Tory aide Carrie Symonds (pictured), has convinced some allies that a joint ticket with a popular female politician is the best way to neutralise the political damage

At the same time, friends of Mr Johnson’s main rival for the leadership, Home Secretary Sajid Javid, are understood to have made overtures to Chief Secretary to the Treasury Liz Truss about standing on a joint ticket with him if Mrs May is forced to resign.

Ms Truss, who is also expected to put her name forward in any contest, has recently undergone a ‘wardrobe makeover’ ahead of her expected tilt at the leadership, ditching dowdy items in favour of more alluring outfits.

Mr Johnson is expected to upstage Mrs May at the Tory Party Conference next month when he speaks at a ‘chuck Chequers’ rally the day before her keynote speech.

But some allies say they fear that No 10 will try to use ‘dirty tricks’ to take the shine off of his appearance – such as releasing the Tory Party’s investigation into his mocking comments in a newspaper article about burkas on the same day as the rally, in order to neutralise his triumph.

Mrs May hopes to make major progress on Brexit at a key summit this week when the leaders of all 28 EU countries meet in the Austrian city of Salzburg to discuss how they could reach a deal.

Downing Street hopes that the summit will signal that EU negotiators are preparing to dilute their demands for further concessions on Chequers in order to protect Mrs May from a putsch.

However, sources close to the negotiating teams warned that the most Theresa May could expect were ‘positive words’ and a ‘failure to kill off Chequers altogether’.

It comes amid continuing tensions behind the scenes over Northern Ireland. The EU is still insisting on a ‘backstop’ to the agreement if no deal can be reached, which would leave Northern Ireland effectively tied to the Irish Republic in a customs union post-Brexit, with a border with the UK running down the middle of the Irish Sea.

The Mail on Sunday understands that the Foreign Office has complained to the European Commission that the British negotiating team in Brussels were recently forced to wear security badges which – for the first time – referred to ‘Great Britain’ rather than the ‘United Kingdom’. The former term excludes Northern Ireland.

A source present said: ‘There’s a clear campaign from some in the Commission to undermine Northern Ireland’s status within the UK. Careless insults like this are just the start of it. We have to keep our United Kingdom together through Brexit, whatever the EU and one or two of their useful Brexiteer idiots might think.’

The source added that the Government had sought assurances that the ‘United Kingdom’ would be restored as the standard.

Brexit Secretary Dominic Raab has cancelled a trip to Brussels for Brexit talks after negotiations stalled over the EU’s proposals for a ‘backstop’ solution to the Irish border question, saying ‘substantive’ differences remained.