To summarise: the British government has negotiated a withdrawal deal with the EU, shaken on it, taken it to Parliament, realised it hasn't got enough support, and pulled the vote at the last minute, promising to seek assurances on the exact deal it has just negotiated. It's mad, quite mad, and the maddest-looking person of all is the Prime Minister, who told the House of Commons on Monday that while she is "clear" that this deal is super, she will now seek "clarity" on precisely what's in it. I give up. As my old friend keeps saying: "I think the world is being run by a skeleton staff of idiots." 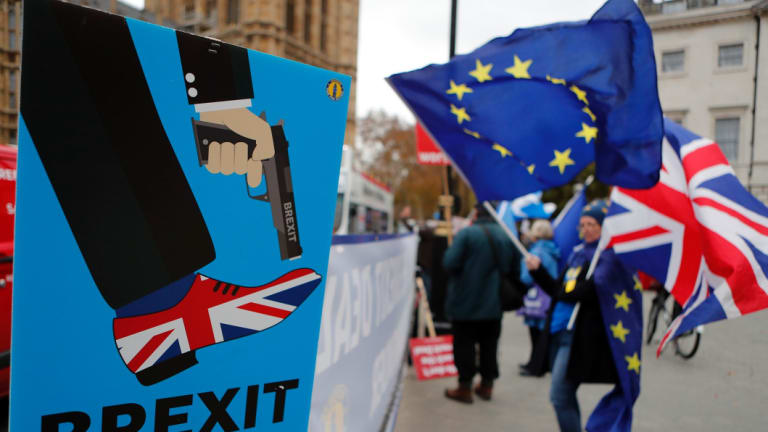 Protesters demonstrate against Brexit outside the British Parliament.Credit:AP

Secondly, Britain has not woken up to the fact that Brexit involves a serious rupture that could well affect people's daily lives. Since the referendum, politicians have gone on and on about why the country voted to leave the EU, with scant concern for how they'd do it or its consequences.

Alas, the process was hijacked by a coalition of disaffected civil servants, Remainers and a PM chasing her fantasy national consensus, which she imagined centred on keeping more immigrants out. The Tories insisted that a bad deal would be worse than no deal, but through a mix of mendacity and incompetence, they came back from Brussels with a bad deal none the less – while making almost no preparation for a no-deal alternative scenario.

This latter snafu was scandalous. It totally undercut Britain's negotiating position. Committed to a withdrawal deal even as said deal got worse, Parliament turned decisively against it, and no-deal has begun to emerge as a serious possibility from this farce. In which case, the failure to invest money in a no-deal outcome isn't just short-sighted: it's borderline criminal negligence.

When you leave a massive political trading bloc that you've been in for 40-odd years, it's going to hurt. Suddenly you're in control of your own rules; checks might appear, tariffs hit; there's a land border where it hardly looked like there was one for a long time. It's tough, it's daunting, but that's the choice the British people made in 2016 – and didn't the Remain campaign warn everybody that all of this would happen? Sometimes in the history of nations, a people decide they want to do something and, regardless of the pain, they make the sacrifices necessary to accomplish it. They spend the money to go to the Moon, they shed the blood to win a war – they don't deny the facts, but they do seek to change them.

Why, for example, has Britain not challenged the orthodoxy surrounding a hard Irish border? It is pure speculation that barbed wire and dogs will appear: who will enforce this?

On Monday, the PM tried to buy herself even more time by delaying the vote and promising to perform an acrobatic contradiction: she will improve the withdrawal deal without rewriting it. On how she would do this she was unclear. The Eurocrats will shake their heads in despair and dismay, and all I can say is that many Britons are just as confused as you are.