At the rally held by a rights group, thousands of protesters called for an end to abuses by the country’s military. 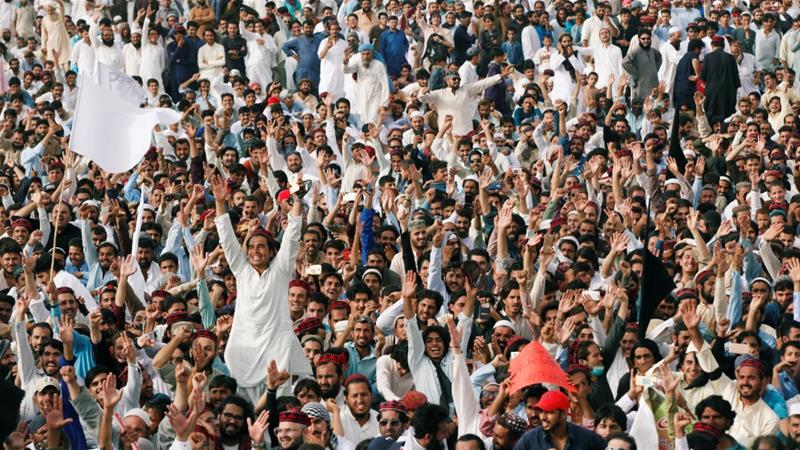 Islamabad, Pakistan – Thousands of protesters have called for an end to alleged rights abuses by Pakistan’s military at the latest rally by a grassroots rights group, defying restrictions and a string of detentions of the movement’s organisers.

The Pashtun Tahaffuz Movement (PTM), a human rights group formed earlier this year, held the rally in the southern Pakistani city of Karachi, the country’s largest city, on Sunday.

The PTM calls for greater rights for Pakistan’s ethnic Pashtun population, which forms roughly 15 percent of the 207 million population and resides mainly in the country’s northwest, where the fight against the Pakistani Taliban has remained focused.

Unusually for Pakistan, the group has often directly called out the country’s powerful military, which has ruled for roughly half its 70-year history since independence, for alleged rights abuses committed against citizens in the war against the Tehreek-e-Taliban Pakistan (TTP) and its allies.

In the lead-up to the rally, a number of PTM leaders were detained for varying lengths of time, and its leader Manzoor Pashteen was twice prevented from boarding flights to the southern city, PTM’s Mohsin Dawar told Al Jazeera.

Pashteen eventually made the 1,400km trip from the capital Islamabad by road, arriving at the protest to a raucous welcome.

“This country has one constitution, the state must run according to the constitution. You cannot just rule as you please,” said Pashteen.

“The courts, the parliament, they have all been captured [by the military] … and we must end this.”

The PTM leader reiterated his demand that a truth and reconciliation commission be formed to investigate and deal with rights abuses allegedly committed by the Pakistani state, rejecting an abortive jirga (tribal council) process the government had offered.

“Jirgas are held between enemies … between the state and its citizens, there is only the constitution. So make a truth and reconciliation commission, and we will come before it. We are earnest in our desire to solve these problems, whether you are or not.”

Earlier, video footage released by PTM showed Pashteen being questioned by police in several cities during his journey, which he undertook after being denied the right to fly to Karachi.

The Human Rights Commission of Pakistan (HRCP) expressed “grave concern” in a statement released on Saturday, saying “the authorities’ disproportionate response is unwarranted”.

Among PTM’s primary demands are an end to extrajudicial killings by security forces, transparency around a campaign of disappearances allegedly perpetrated by security forces that have accompanied the war against the Taliban, and the treating of citizens with greater dignity at security checkpoints.

At the rally in Karachi, the stage from which speakers addressed the boisterous crowd was covered with posters of those who had been allegedly detained, arrested or abducted by security forces.

A government-run inquiry commission says it has investigated at least 4,929 cases of Pakistan’s missing people, a number that rights groups say is vastly understated.

In April, an Al Jazeera investigation into Pakistan’s missing persons reviewed 22 cases of those who have disappeared since the launch of military operations against armed groups.

At the rally, participants openly questioned the military’s rights record, a rare move in a country where the army still exercises close control over security and foreign policy, as well as the news media.

“There were … women here carrying posters with details of their missing fathers, brothers and sons,” said Rahma Mian, an academic who was at the rally. “I have never attended any public event, let alone a political rally, where the army and its excesses has been called out so openly.”

The group has faced a virtual media blackout, with news organisations ordered not to run stories or footage of their demonstrations.

“Da sanga azaadi da?” thousands of participants shouted in Pashto, in unison, throughout the rally.

“What kind of freedom is this?”