More than 120 ADF troops hit the ground in the battered Dandenong Ranges on Monday, distributing generators to hundreds of people still without power, 12 days after devastating storms swept the state.

Extraordinary scenes of devastation can still be found across the area amid growing weariness about the length of time it’s taking to connect people with supports. 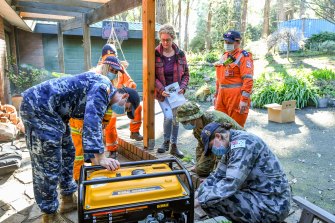 Mount Evelyn resident Therese Harris receives a generator on Monday from an ADF team operating out of Olinda CFA.Credit:Joe Armao

After nearly two weeks without power at her secluded Mount Evelyn home, Therese Harris was preparing to move back in with her husband and sons after receiving a generator delivered by Australian Defence Force personnel.

The family fled the storm in the middle of the night after hearing the crashing of trees smashing all around the house.

“I liken it to the closest I’m ever going to be to being in a war zone, because you can hear trees falling everywhere, and you don’t know when the next one’s going to land,” Ms Harris said.

Electricity distribution company AusNet Services confirmed about 2000 customers remained without power on Monday, as its workers continued to rebuild the system after the storms. 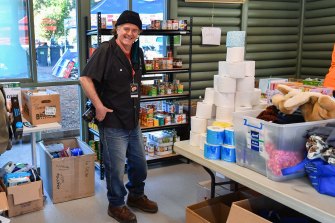 Peter Green at Kalorama football oval on Monday. A centre has been set up at the playing field to support locals affected by the recent storm.Credit:Joe Armao

“A lot of them are too proud to ask for help,” she said. “It’s only when we knock on the doors that we’re finding some of these people.”

With thousands still without power, communities are banding together.

At the football oval in Kalorama, a small band of residents set up a community hub the day after the storms hit for people who remain without electricity and, often, food.

Inside the community hall is a free supermarket, containing donated produce, canned goods, essentials like toilet paper and feminine hygiene products, children’s toys, and even donated new boots and socks.

Outside, a fire pit has been a space for hundreds of visitors to gather, to share stories and offers of help, and a listening ear or hug.

For the past two nights, a local jazz band has come down after dark to keep spirits up.

Local resident Peter Green, who has barely slept in 11 days, said the community response had been overwhelming. 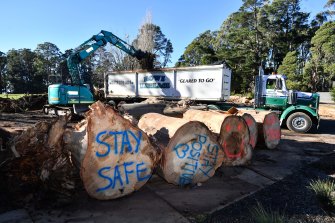 “On Thursday last week we had 2800 people come through,” he said.

“Today, this is the quietest it’s been, probably because it’s a beautiful day and people were actually chainsawing. It’s like that Julie Andrews saying: ‘the hills are alive with the sound of chainsaws’.

“So I’ll say some humour is getting us through.”

AusNet said it has 500 workers in the field trying to restore power as quickly and safely as possible.