Three members of the same family died in a house fire which had a faulty smoke alarm because a care agency didn’t check it, as it was ‘unsafe’ to do so.

Just weeks before the blaze the agency was told that the alarm was working by the residents, however they didn’t check it because they thought it was dangerous to stand on a chair to reach it.

James Whelan, 76 along with his brother Joseph, 74 and his wife Anne, 68 all died in the fire in Hornchurch, east London on February 7 last year, an inquest heard today.

It is believed that a sofa caught fire in the property from a lit cigarette, and all three of the deceased died from smoke inhalation. 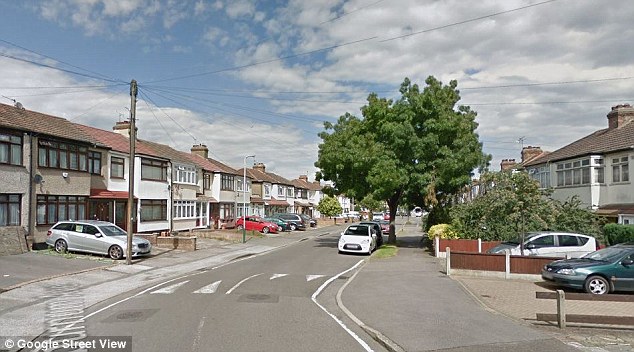 James Whelan, 76 along with his brother Joseph, 74 and his wife Anne, 68 all died in the fire in a house on Laburnum Avenue, Hornchurch, east London (pictured) on February 7 last year, an inquest heard today

When the smoke alarm was found in the stairwell of the three-bed home it did not contain a battery, fire investigators said.

Anne was pronounced dead at the scene, while James, a retired porter, and Joseph, retired naval communications officer, both died in hospital a day after the fire in James’ terraced house.

The couple had travelled from County Cork to visit James to help care for him, as he was suffering from chronic back pain and sciatica.

An investigation into the fire found that it was possible that James, born in Dublin, had got up to have a cigarette before the fire took hold, although he is thought to have stopped smoking a year previous.

The care agency, contracted by Havering Council, to provide James with home support was told by relatives during a risk assessment that the alarm was fully functioning.

The assessor did not test the alarm herself because it was located over a stairwell, and she could not try and test it using a chair because it would be unsafe.

Lynn Pritchard, who carried out the risk assessment for Warren Care on 16 January last year, told the inquest: ‘We don’t physically test them, it’s unsafe to stand on a chair.

‘If it wasn’t working I would note down that it wasn’t and ask if they would like a referral to the London Fire Brigade. ‘

Assistant coroner Dr Shirley Radcliffe said: ‘You recall Mr Whelan was in bed and his children were present at the home.

‘You completed the risk assessment and you asked if they had smoke alarms in the property and asked if it was working and you thought it was. You didn’t physically test the smoke alarm yourself though.’

Michael Beasley from the London Fire Brigade said: ‘The brigade became aware of the fire following a call from a neighbour.

‘The neighbour called when they realised there was some very light smoke that you could see at roof level.

‘Mr James Whelan was found by the back door. He was lying on the floor next to the locked back door and the other two family members Joseph and Anne were found in the front bedroom on the floor again.’

Mr Beasley said: ‘The fire itself was confined to a fairly small area of the living room. The couch was on fire and the fire had burnt through the doorway and the door.

‘All that smoke would have gone up the stairs.

‘It was identified that the rear bedroom was being used by James and Anne. There were ladies toiletries and items and the gentleman’s bits and pieces were in there too.

‘Unfortunately the back bedroom had a large double glazed window with very tiny openings at the top.

‘There was no other way they could get out without breaking it.

‘I imagine if able to open the door they would have ended up on their knees to get away from the smoke layer. They had no escape down the stairs.

‘The only option is to get to the front of the house and try to get help by opening the window and trying to breathe.’

The inquest heart that due to his back pain, James would often get up in the night – and the investigation found it was likely he was already downstairs when the fire started as it would have been too difficult to get down the steps when the smoke started billowing up.

Mr Beasley said: ‘He may have been down in the lounge at some point in the night, maybe when the fire was discovered. It would have been difficult for anyone to get down the stairs once it had started.

‘Perhaps Mr Whelan had got up in pain to have a cigarette. It’s not to blame anybody in particular or try to establish that – because it’s not possible to do so.

Mr Beasley said: ‘There was no battery within the alarm, we couldn’t see a battery that had fallen. It looked like it was the only smoke alarm that would have been in the house.’

Terry Cotton, a group safeguarding leader for Manor Care said they had ‘no statutory responsibility’ to check smoke alarms but had changed the questions that risk assessors must answer to complete the checks.

He said: ‘It was confirmed that Lynn Pritchard carried out a care needs assessment and the smoke alarm wasn’t actually checked, it was pointed out to her and she was told it was functioning.

‘It’s recognised that Manor Care has a duty to protect the health and safety and welfare of our employees and anyone who is affected by their work and do what is reasonably practicable to ensure this.

‘There isn’t any specific regulatory duty within Manor Care to maintain the premises of the service user. We have no statuary power or duty to check things like fire alarms.

‘Mr Whelan wasn’t deemed to be a fire risk – he didn’t smoke.

‘We have changed the question now on the new care needs assessment. ‘Does it appear to be working?’ didn’t feel to be a helpful question in hindsight.

‘We now issue new guidance to our assessors with the issue of smoke alarms. The first question is ‘Do they have a smoke alarm’ and the second is ‘Does the service user’s family or advocate confirm the smoke alarms are working?’

Dr Radcliffe said: ‘The carers are going above what is required of them. It would be onerous on carers to be expected to do fire risk assessments.

‘I think there’s a perfectly reasonable and accessible service by the Fire Brigade who bend over backwards to do this for anyone.

‘Perhaps if there is a smoke alarm that is not accessible, that needs to be a reason to suggest a fire service referral.

‘It could be just common sense if it’s an elderly person – it must not be difficult to test’.

Dr Radcliffe gave a verdict for all three of the family members of accidental death – noting Joseph and James’ cause of death as carbon monoxide poisoning and smoke inhalation with a contributing factor of heart disease.

Anne’s cause of death was recorded as carbon monoxide poisoning and smoke inhalation.

She said: ‘It’s an appalling tragedy three people lost in one fire, two brothers at the same time as a result of this and the loss of Anne at the scene.’