Three men were rescued from suffocating inside a sealed refrigerated lorry after they phoned police to say they were struggling to breathe.

Cambridgeshire Police said the vehicle, believed to have travelled from France, was tracked along the A14 and the M11 with the help of Essex Police.

It was found at Brampton Hut services near Huntingdon, Cambridgeshire, just before 4.30pm on Wednesday. 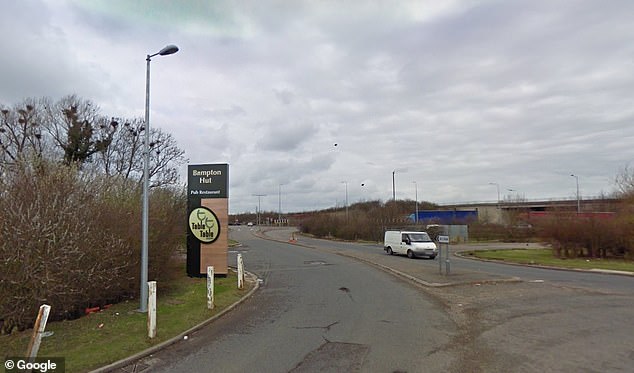 The lorry, believed to have travelled from France, was tracked to Brampton Hut services near Huntingdon, Cambridgeshire

The three men were found to be safe and uninjured, and their welfare will be handled by the immigration services.

A spokesman for Cambridgeshire Police said the driver was not arrested.

He added said: “Stories like this may be distressing, but highlight that slavery and trafficking are real and police need the public’s help.”

People should be particularly vigilant at service stations or lay-bys, and should raise the alarm if anything about the vehicle doesn’t seem quite right – for example if produce is being thrown from it or something is being done to catch the attention of other motorists.

Anyone who sees any of the above is urged to call police on 999 and to take a note of the vehicle registration number.

Last year lorry driver Maurice ‘Mo’ Robinson, 25, of Craigavon in Northern Ireland pleaded guilty to the manslaughter of 39 Vietnamese people who were found dead in the back of a refrigerated truck in Essex and was jailed for 13 years.

The bodies of eight females and 31 males, including 10 teenagers, were discovered in a trailer in an industrial park in Grays, Essex, in October 23.

The two ringleaders of the people-smuggling gang responsible, Ronan Hughes, 41, who ran a haulage company, and co-conspirator Gheorghe Nica, 43 were also jailed for 27 and 20 years respectively.