Three schoolgirls in China have drowned in a remote reservoir after one of them fell into the water and the other two tried to save her, according to local reports.

The three friends, one aged 12 and two aged nine, had allegedly been playing unattended by the pond with another friend, also a girl, on top of a mountain.

The first victim fell into the reservoir while trying to wash her hands before the other two jumped in to rescue her, it is said. 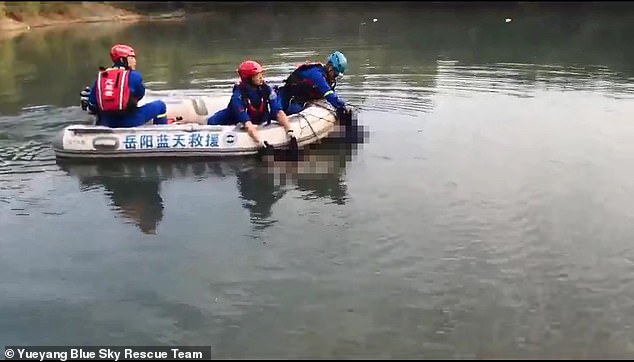 Workers at the Yueyang Blue Sky Rescue Team are pictured trying to find the girls in a reservoir in Hunan, China. The three children drowned after one of them had fallen, according to reports 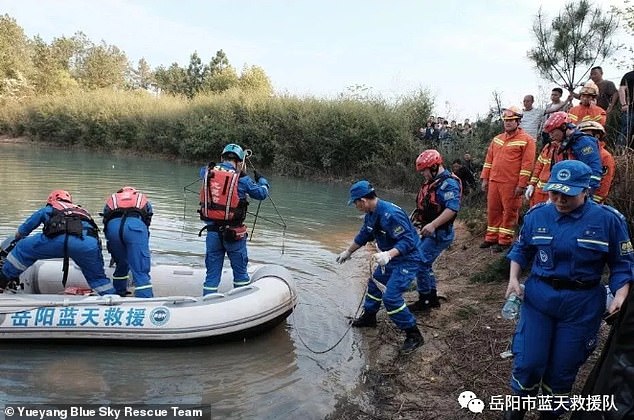 The other two girls allegedly jumped into the pond in an attempt to save their drowning friend. All three children were pronounced dead at the scene after rescuers found their bodies

The incident took place on Saturday afternoon in the village of Jinquan on the outskirts of Linxiang city in Hunan Province.

All of the children were pronounced dead at the scene by paramedics.

Police were alerted of the incident by a pedestrian after the fourth girl ran down the mountain to look for help, according to Chen Hua, the head of the rescue team.

The fourth girl had not jumped into the pond.

Mr Chen, who led the Yueyang Blue Sky Rescue Team to the scene, said the reservoir was small and it took 10 officers 15 minutes to recover the girls’ bodies.

Different from media reports, he suspected that the three girls had been swimming in the reservoir prior to the tragedy. 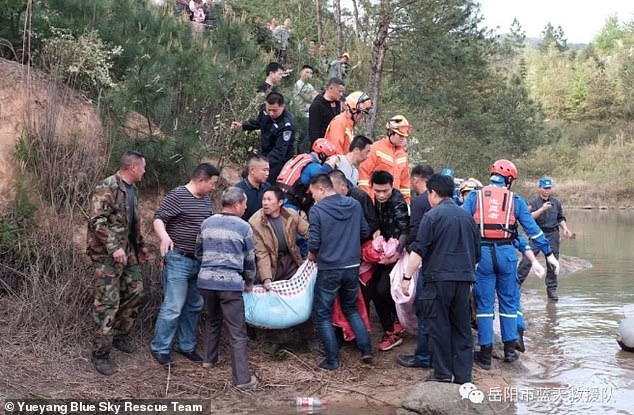 ‘When we arrived at the scene, we saw their clothes folded neatly by the shore,’ Mr Chen told MailOnline.

It was likely that one of them started to sink and the other two tried to help her, Mr Chen added.

Police are yet to announce details of the case. Further investigation is underway.

It’s been estimated that more than 55,000 minors in China are killed in accidents every year. Drowning and road accidents are the two leading causes of death.

In 2017, three young children from the same family drowned in the space of 30 seconds in a Chinese village after one of them fell into a river and the two others apparently tried to rescue the first one.