Three teenagers have been arrested after a man in his 40s was stabbed multiple times in Melbourne’s CBD on Monday night.

After an altercation with the teenagers, the victim was stabbed several times on Elizabeth Street at 9.20pm, according to Victoria Police investigators.

The victim was taken to hospital with life-threatening injuries. 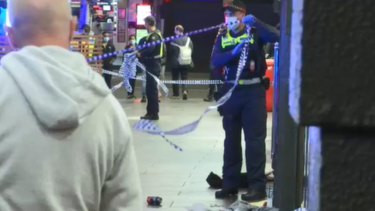 Police at the scene on Monday night.

The three remained in custody on Tuesday morning, with no charges laid.

Anyone who may have witnessed the incident or with information is urged to contact Crime Stoppers on 1800 333 000 or submit a confidential report at www.crimestoppersvic.com.au