A thug who launched a horrific planned attack on a 88-year-old widow in her home has been jailed for 14 years.

Blanche Rowlands was beaten black and blue by Jeffrey Earp, 50, a violent burglar who broke into her home in Newtown, Wales, in June last year.

Her engagement ring and other sentimental jewellery given to her by her late husband were stolen and have never been recovered.

Mrs Rowlands was later found by her neighbour having suffered significant and life-changing injuries.

Earp, of Newtown, admitted robbery and conspiracy to commit burglary and was jailed for 14 years and four months by a judge at Caernarfon Crown Court on Wednesday.

Keith Grogan, 42, and Carl Barrett, 51, both also from the town, also admitted conspiracy to commit burglary and were each jailed for three years.

Detective Constable Amy Davies, who led the investigation, said: ‘This horrific, planned attack on a vulnerable woman is the worst case I have dealt with. 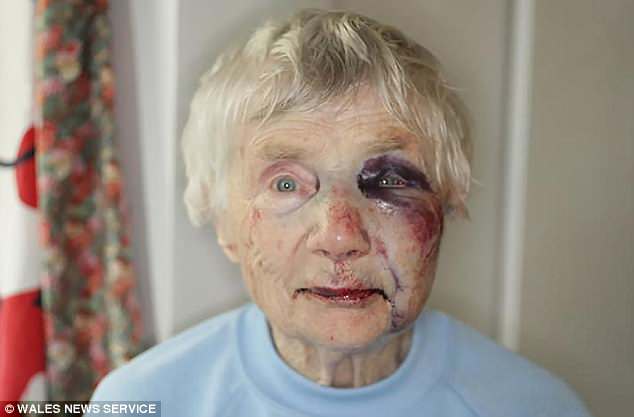 Brutal: Widow Blanche Rowlands, 88, pictured shortly after the attack which left her with life-changing injuries

‘Blanche was subjected to a brutal, sustained attack, and left with life-changing injuries. This could easily have been a much worse outcome.

‘After an intense year-long investigation I am satisfied we secured the best possible outcome for Blanche and her family.

‘I would like to thank the Newtown community for their help and support, which helped us get this case to court and secure some sense of justice for everyone affected.’

‘On behalf of mum I would like to extend my sincere thanks to the community for their support of mum over the past 12 months. 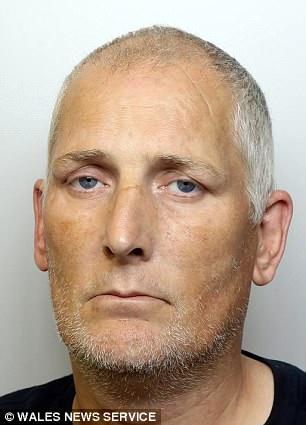 ‘I would also like to thank Newtown police for the hard work and dedication carried out to bring these men to justice and make the town a safer place for everyone.’

Three men were jailed for a total of 20 years after a frail widow was beaten black and blue in her own home.

Injured Blanche Rowlands, 88, was locked in her bedroom for two hours while one of the gang ransacked her home looking for valuables.

She was found with a black eye and her shoulder socket was smashed beyond repair in the ‘brutal’ attack.

Her engagement ring and sentimental jewellery from her late husband were taken in the burglary at her bungalow in Newtown, Powys, Mid Wales.

‘Mrs Rowlands was walking down her path and unaware she was being watched.

‘When she returned to her door Earp was waiting and he forced his way inside and demanded cash.

‘The victim was struck with an unknown weapon, causing significant injury to her face and body

‘Earp stopped her reaching a phone and he rifled through drawers and wardrobes.’

The court heard Mrs Rowlands was found in a ‘confused, upset and frightened’ state.

Earp was jailed for 14 years and four months after admitting robbery and conspiracy to commit burglary.

Grogan, 42, and Barrett, 51, were each sentenced to three years in prison for conspiracy to commit burglary. All three men are from Newtown.

Judge Timothy Pitts told Earp: ‘You ruined Mrs Rowlands’ life. It was a sickening attack. It must have been an horrendous ordeal for her.’

The judge said those who prey on the elderly should get ‘severe sentences’.

Detective Constable Amy Davies, who led the investigation, said: ‘This horrific, planned attack on a vulnerable woman is the worst case I have dealt with.

‘Blanche was subjected to brutal, sustained attack, and left with life changing injuries. This could easily have been a much worse outcome.

‘After an intense year-long investigation I am satisfied we secured the best possible outcome for Blanche and her family.’Blanche’s daughter, Bethan Rowlands, said after the case: ‘The whole family is happy with the court result.’