‘You weren’t crying when you beat up your partner’: Judge slams ‘cowardly’ thug as he sobs in court while being jailed for three months for biting and punching his girlfriend 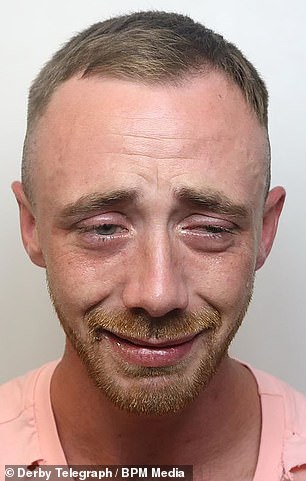 Daniel Keane from Chaddesden, Derbyshire, pictured, assaulted his partner while subject to a suspended jail term for attacking the same woman while she was six months pregnant

A ‘cowardly’ criminal was in floods of tears as he was jailed for punching and biting his partner who is the mother of his child.

Daniel Keane, from Chaddesden, Derbyshire, is ‘having a hard time in prison’, according to his barrister, and was sobbing so much at his trial that proceedings were halted.

Keane was on a suspended jail sentence when he entered his partner’s home and assaulted her.

On that night, she had told him not to come back to the property so he shouted abuse and threw down his false teeth outside her home.

Derby Crown Court heard that, as the 26-year-old scrabbled around on the ground for his dentures, the victim took pity on him and opened the door.

He then hit her several times, pulled her hair and bit her.

The court heard how Keane was on a suspended sentence at the time of the incident for assaulting the same woman when she was six-months pregnant.

As he sobbed in the dock, Judge Robert Egbuna referred to a letter that had been penned by the victim, saying she ‘forgave him’ and calling on the court not to jail him.

The judge had little sympathy for the defendant though, first ticking him off for having to pause proceedings while he stopped crying and then handing him a custodial sentence for his actions.

Judge Egbuna said: ‘You need to stop crying in front of court. Your partner is here, she is the one that should be crying.

‘You behaved like a coward. You entered her house and beat her up for no reason. You weren’t crying when you beat up your partner.

‘I will take on what has been said in relation to the complainant in her letter.

‘If you appear before the court again, the court will not show such mercy.’

The court heard how the incident took place on June 29.

The victim and the defendant had been in a relationship for three years and they had both been out separately that evening.

When the victim returned home she became aware the defendant and his friend had been drinking and asked them to leave, which they did. 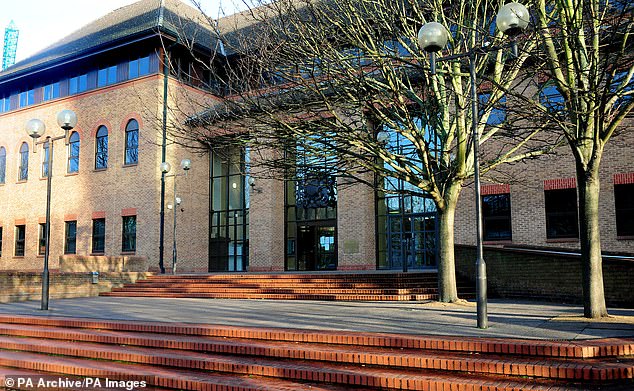 Judge Robert Egbuna sitting at Derby Crown Court, pictured, was forced to adjourn his sentencing briefly as Keane was crying uncontrollably in the dock

Mark Watson, prosecuting, said: ‘At 3.30am the victim walked her sister home and in doing so, she saw the defendant. She told him she didn’t want him to come back.

‘This defendant was outside her house shouting abuse at her, calling her various names.

‘He takes his teeth out throwing them on the floor and was scrabbling around looking for them.’

Mr Watson said as he looked for his teeth, the victim took pity on him and opened the door, but when she did so, he entered the property.

He said: ‘She went upstairs to call the police. He followed her. He punched her several times to the head and bit her.

‘He pulled her hair. She had a small cut to her eye, reddened cheeks and soreness to her elbow.

‘He then left and came back banging on the door, causing some damage to the door.’

Judge Egbuna read a letter which had been penned by the victim which stated that she forgave him and asked for him not to go to prison.

The victim also didn’t make a request for a restraining order to be imposed.

Mark Knowles, mitigating, told the court that the relationship was going well, that he regretted his actions and that Keane had a drink problem.

He said: ‘He doesn’t recall too much and fully accepts what is put forward.

He desperately wants the relationship to continue. He has let himself down.

‘He is having a hard time in prison. He is a young man and has a completely different side to him.

‘He is a quiet individual.’

The court also heard how he had also been given a community order for drugs offences which predated the first assault.

For that, he had completed all the unpaid work and 18 of his 20 rehabilitation activity requirement days.

Dressed in a red-and-white Tommy Hilfiger T-shirt, Keane stopped sobbing as his sentence was passed.

He had pleaded guilty to assault by beating and criminal damage at an earlier hearing.

He then gave him another two months in prison for the offences, giving a total of three months in custody.