MILLIONS of asthma sufferers are being warned over deadly "thunder fever" as the UK is hit by storms and soaring pollen levels today.

Weather warnings are in place for most of the country as Britain is set to be battered by heavy rain and thunder after a glorious hot spell this week. 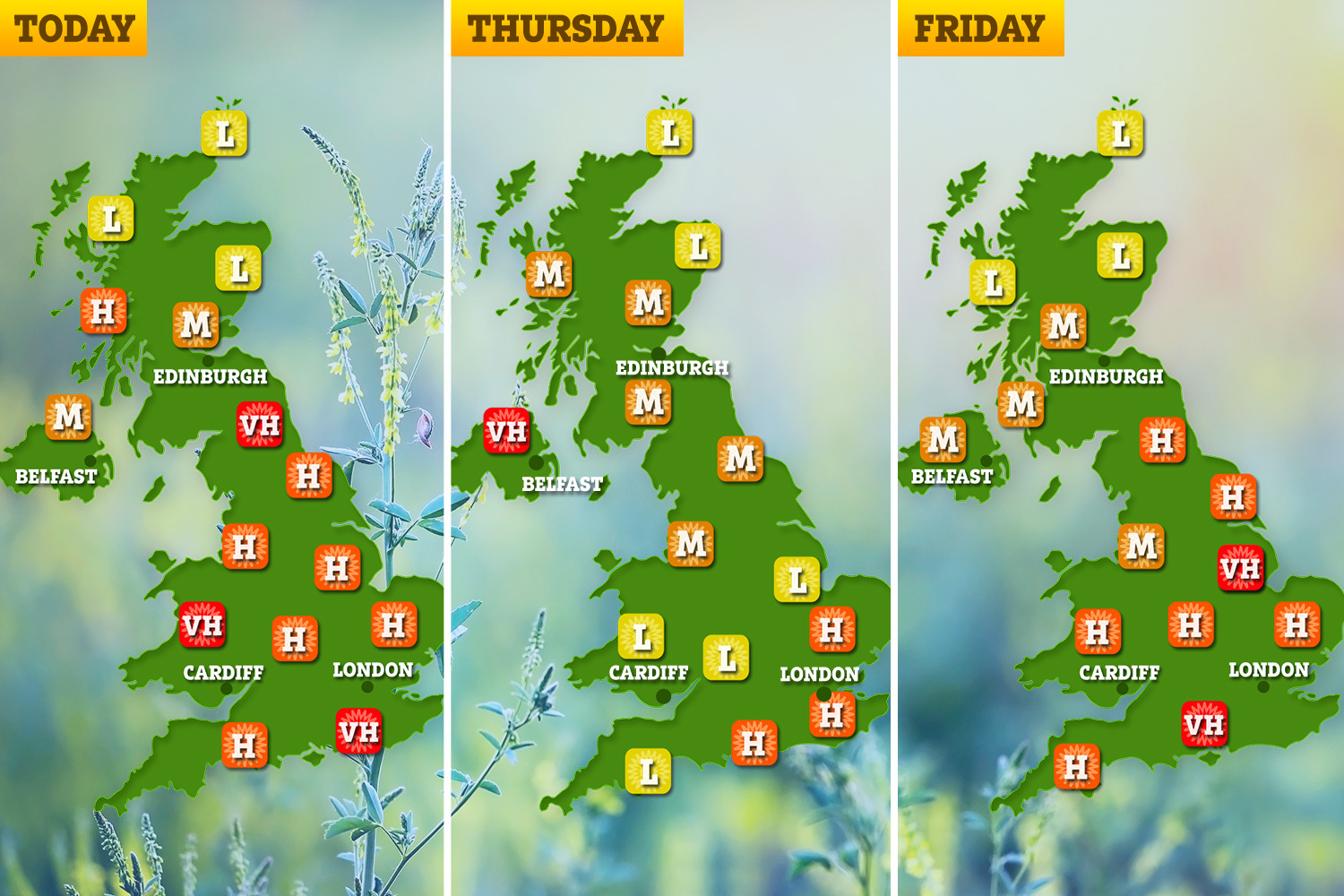 But the sudden change in weather could spell disaster for those with hay fever or asthma, experts warn.

Storms mixed with a high pollen count across the country create the perfect condition for asthma attacks – dubbed thunder fever.

In short, it's a sort of extreme hay fever, or as allergy specialist Max Wiseberg explains, it's "upside down hay fever".

Allergy sufferers, such as people with hay fever, are often at the mercy of the pollen count with high levels causing constant sneezing and eyes that water.

That situation is worsened by thunderstorms, and asthma sufferers are especially affected.

Asthma charities have even warned Brits to stay indoors while thunderstorms are expected, with fears the weather conditions could be potentially fatal in rare cases.

An Asthma UK spokesperson said: "The air before a storm can feel very humid and close.

"During pollen season, the windy conditions during a thunderstorm blow lots of pollen high into the air.

"The moisture higher up in the air breaks the pollen into much smaller pieces.

"As these smaller pieces of pollen particles then settle back down, they can be breathed in, irritating the smaller airways of the lungs."

How to minimise the effects of thunder fever

Dr Andy Whittamore, GP and clinical lead at the charity, said: “Our weather in the UK is unpredictable and changes happen suddenly sometimes.

"So it’s important to stick to a good routine of taking your preventer inhaler every day as prescribed.

"That way you’re on top of your asthma whatever the UK weather throws at you.”

Max Wiseberg, who is also the creator of HayMax allergen barrier balm, said: “Although many people associate rain and thunderstorms with a reduction in pollen count, this is not always the case.

"Thunderstorms can actually make your hay fever far worse. This reaction to the weather is known as ‘thunderfever’.”

The phenomenon has been dubbed "thunder fever" after nine people died from asthma attacks after thunderstorms tore across Melbourne, Australia, in 2017.

He said thunder fever is not scientifically proven but there are "strong theories which make sense when added together".

Thunderstorms can actually make your hay fever far worse. This reaction to the weather is known as ‘thunderfever’

Max explained: “There has been quite a lot of research into this and according to a report in The European Respiratory review, humidity breaks pollen grains into smaller allergenic particles.

"So one pollen grain becomes two, which instantly raises the pollen count.

"But these new pollen grains also turn into a kind of ‘super pollen’ which appears to be more allergenic than normal pollen, causing more severe reactions in sufferers.”

He continued: “Storms cause great movements in the air, both bringing pollen grains down which might have otherwise risen above head height out of harm’s way, and whipping up pollen grains and fungal spores near the ground.

"To make matters worse, farmers will often work hard to get their fields harvested before a storm which further increases the level of allergens in the air.

"And don’t think that living in the city will spare you from this either – the thunderstorm can pick all this pollen up and carry it for miles before dumping it at head height in the city.”

It comes as experts warn hay fever will be far worse this year due to the coronavirus lockdown.

Fewer cars have been on the road due to restrictions that have been put in place due to the Covid-19 pandemic – meaning there is less pollution in the air.

Less pollution in the air has meant that pollen is circulating more frequently as there are not as many barriers for it to seep through.

Meanwhile, the wetter winter and unseasonably warm spring has triggered the grass season to start earlier this year.

Dr Jean Emberlin an allergy expert who works with Opticrom Hayfever Eyedrops, said: “The wet and warm weather in late winter and spring means we are expecting a very productive year for pollen.

"In particular, the very warm weather through much of April has promoted grass growth and development in most regions.

"Although April has been dry, there has been sufficient moisture in the soil in most areas to provide ample water for the grasses.

"This is likely to lead to an above average year for grass pollen count severity, especially if the weather has dry warm periods interspersed with some rainfall to keep the grass growing."