AUGUSTA, Ga. — Tiger Woods has now started 358 tournaments on the PGA Tour and until this one — his most improbable one, the 2022 Masters — his definition of winning was simple: sit atop the leaderboard at the end of competition.

Woods’ ferocious competitive instincts and obsession to win, perhaps bordering on unhealthy, has driven him across his career. There were no second places, no top-five finishes. There is victory. There is failure.

Then came Thursday here at Augusta National which Woods entered 408 days after a car accident nearly cost him part of his right leg and 509 days since his last truly competitive round. Against long odds and at the end of an even longer rehabilitation and medical journey, Tiger Woods walked out to the first tee, stared up at a huge hill and some 10,000 fans staring back at him, and got to work.

A par save to end the round. #themasterspic.twitter.com/oCkL7N54Yb

About four hours later he saved par on 18 to a massive ovation. He had not only completed the round, he was sitting at a 1-under 71, eventually just four shots behind the leader, Sungjae Im.

Ten months ago, when Woods couldn’t get out of a hospital bed installed in his house, this seemed impossible. As recently as two weeks ago, when rumors of him playing easy rounds down in Florida emerged, this seemed unlikely.

Yet here it was, Tiger Woods not just back, not just likely to make the cut at a major championship, but right there at the edge of the leaderboard.

So Woods was asked: Is this a win?

“Yes,” he said, and it was an acknowledgement of truth, a victory of perspective over his traditional bravado.

Tiger’s desire to win a sixth green jacket is not lessened by admitting that this, this incredible comeback, was a victory unto itself.

“If you would have seen how my leg looked to where it's at now,” Woods said. “… To see where I've been, to see — to get from there to here. It was no easy task.” 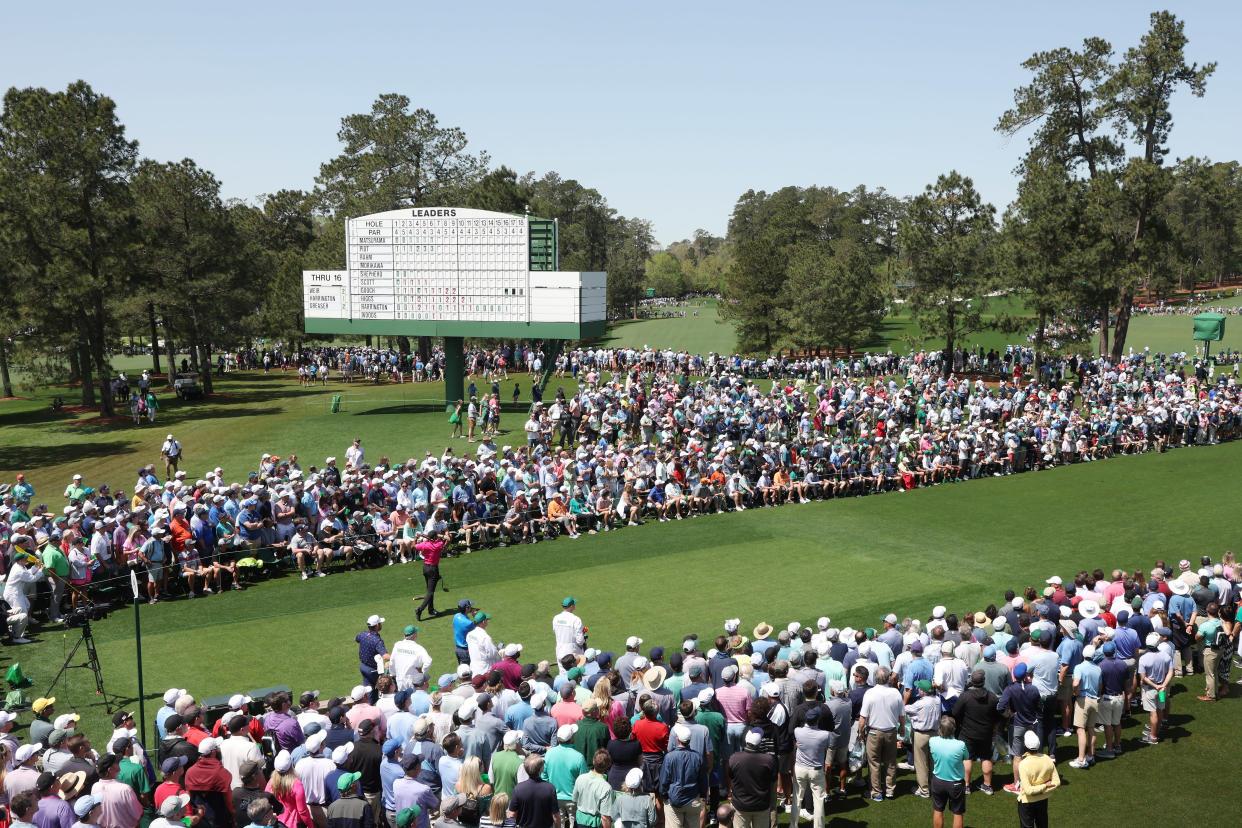 Tiger was really good on Thursday. He played a steady game amidst changing conditions, still damp early, more windy late. Where others fell off, he stayed strong — birdies on 6, 13 and 16; bogeys on 8 and 14. He didn’t fade as his reconstructed right leg grew tired of climbing those Georgia hills.

“It did not get easier, let's put it that way,” Woods said. “I can swing a golf club. The walking is not easy. It's difficult. As I said with all the hard work, my leg, it's going to be difficult for the rest of my life. That's just the way it is, but I'm able to do it.”

Woods has long lived the ethos of rise and grind, of putting in extra work, of — if anything — being too muscular, swinging too hard, practicing too much. His body has broken down all around him, but even through long rehabs he often played down the challenges, as if acknowledging such a thing was a mental weakness.

Survive that and you get perspective. You look back not just on the surgeries and the physical rehab, but also the sharpening of his game despite no longer having the ability to hit 1,000-plus balls a day. That had always been his way.

“That doesn't happen anymore,” he said. “I can't do that anymore.”

So, yeah, it’s OK to smile, to enjoy it, to appreciate it. On Thursday he did, trying to maintain focus as huge galleries applauded nearly every step, but also knowing that such a scene, such a moment, was special and certainly not promised.

“I'm very lucky to have this opportunity to be able to play, and not only that, to play in the Masters and to have this type of reception,” Woods said. “I mean, the place was electric … to have the patrons fully out and to have that type of energy out there was awesome to feel.”

This was one day and Woods was quick to remind that nothing has been permanently accomplished.

There is no telling if he can do it, either. He was sore, he said. That was expected. He’d spend the next 24 hours in treatment.

“Lots of ice. Lots of ice baths," he said. "Just basically freezing myself to death.”

He’ll give it a go again at 1:41 p.m. on Friday. Maybe the leg will hold up. Maybe his game will, too. He’s in position to reach the weekend. He’s in position for everything at this point. But nothing is promised. Nothing at all.

What the final scoreboard says, however, won’t change what happened here on Thursday. Tiger Woods returned to competitive golf, returned to the Masters.

That’s one all-timer of a victory, even for him.