The group calls for measures to stop Venice from returning to how it was before the pandemic, its character slowly leached by millions of day-trippers, its churches and canals morphing into “a theme park like Disneyland”. 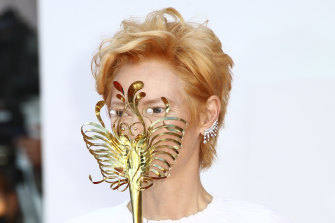 The 21 actors, directors and figures from the arts include James Ivory, Francis Ford Coppola, Wes Anderson and Sir Anish Kapoor, the British-Indian sculptor, who recently decided to base his foundation in a Venetian palazzo.

They give a list of 10 points they say must be addressed to protect the “physical integrity and cultural identity” of Venice as the city faces the return of tourists and cruise ships, as well as long-term threats such as rising sea levels and a falling population.

The plan includes banning cruise liners from the lagoon, clamping down on tourists renting apartments through Airbnb and finishing the multibillion-euro Moses flood protection barrier. 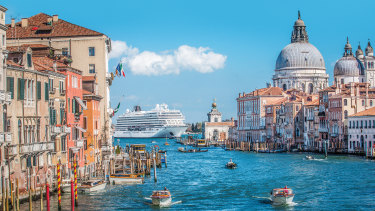 The Viking Star cruise ship near the Grand Canal of Venice.

They call for stricter regulation of visitor numbers, proposing “a management system based on big museums like the Louvre, where groups can enter only if they have a booking”. Before the pandemic, the city had an estimated 25 million visitors a year.

The letter comes as tourists start returning to the world heritage site, which has a population of 50,000. Some hotels are at 70 per cent occupancy and the city’s narrow alleyways are once again thronged with visitors.

The first of the season’s cruise ships is due to dock on Saturday, despite the government indicating in March that it wanted to ban them from sailing past St Mark’s Square and along the Giudecca Canal. Venetians are due to protest against the arrival of the MSC Orchestra vessel, which can carry 3200 passengers.

Toto Bergamo Rossi, the director of Venetian Heritage, a non-profit foundation, which drew up the letter, dismissed criticism that celebrities should keep out of Venetians’ business.

“Venice is Italy’s only international city. Its heritage belongs to the world. Like many Venetians, [the celebrities] want a city that is better than it was before the pandemic. Every year we are less and less, and Venice becomes more and more fake. If we don’t act now, it will be like Disneyland,” he said.

Matteo Secchi, the head of Venessia, a group that campaigns against “over tourism”, welcomed the initiative. “It shows that Venice is of interest to the whole world,” he said.