Washington: On a school field in northern England last month, a group of boys closed in fast upon their target.

“Hey, Jamal, come here!” the boy in the blue jumper yelled, as others strode beside him, one of them holding a phone aloft to record the pursuit. 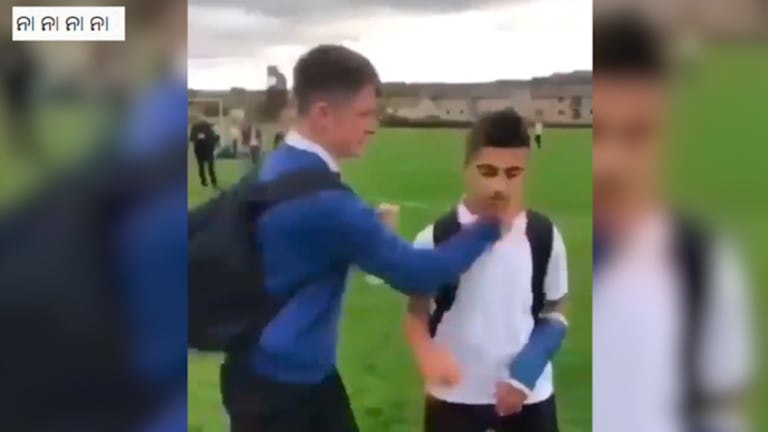 Boy being bullied in England.

“What are you saying now then?” the boy in the jumper asked, again, and this time he butted Jamal in the head as he said it.

The boy in the jumper grabbed Jamal’s neck, twisted him around and pushed him to the grass.

“What are you saying now then? Eh! Eh! Eh?” he screamed. But if there was an answer to the question, Jamal could no longer give it. The sweater boy had a hand around his throat and was pouring water from the bottle into his mouth.

“I’ll drown ya, you little bastard, I’ll drown you!” he shouted as Jamal coughed and sputtered.

He broke free and rolled away a second later. In the final scene of the video, whose publication on social media this week could very well change both boys' lives, Jamal stands up. Students around him jeer and whoop and swish their ties, but Jamal does not react.

He simply rights himself and walks away, across the field and out of the frame — into a form of celebrity he never asked for.

It is unclear how footage of the October 25 incident finally made its way onto Twitter and Facebook.

More than a million people have watched it this week, many of them sharing it or remarking on Jamal’s quiet dignity in what they inferred to be a racial attack.

“We are investigating a report of a racially aggravated assault,” West Yorkshire Police confirmed Tuesday, and on Wednesday they announced they had charged the boy in the jumper with assault.

As for Jamal — he is being reminded there is more to his new home than a pack of bullies in the schoolyard.

“To the Syrian refugee — I say sorry. It’s not the welcoming, friendly Britain we are supposed to be,” member of parliament Tobias Ellwood wrote on Twitter, [in a post later deleted], one of several politicians and celebrities who helped turn the 40-second video into a symbol of anti-immigrant hatred that has swept much of the world.

While Jamal’s proper name and family background remain unverified, the Guardian reported he fled Syria after his relatives were allegedly tortured and killed during the war and was resettled by the British government in 2016.

Similar abuse has traumatised Jamal’s sister, the Examiner wrote, and the family is trying to leave the town of Huddersfield.

By way of remedy, a local resident named Mohammed Tahir got in touch with Jamal’s family and started a GoFundMe campaign on Tuesday.

Jamal “has been subject to months of bullying along with his little sister. To the point where his little sister has broken the lenses in her glasses and attempted to cut her own wrists in school toilets,” Tahir wrote on the fundraising page, which a GoFundMe spokesman told The Washington Post is authentic.

“Having left a war torn country, the least they deserve is to live in peace without being harassed,” was Tahir’s pitch. “Please donate generously and let’s change this horrible situation into a blessing in disguise.”

He struck a nerve.

The fundraiser raised more than $US100,000 in its first day, and the amount continues to climb — as a way to say welcome to a boy chased off a field.