A Conservative motion calling for a decision on whether to allow Huawei into Canada’s 5G networks and a plan on combating Chinese aggression has passed in the House of Commons.

The NDP and Bloc Quebecois supported the non-binding motion in a vote Wednesday afternoon.

The opposition motion, which passed 179 to 146 calls on the government to present both plans within 30 days.

The Liberal government has delayed deciding on which companies can supply equipment for providers’ 5G networks since China imprisoned two Canadian men, Michael Kovrig and Michael Spavor, nearly two years ago in apparent retaliation for the RCMP’s arrest of Huawei executive Meng Wanzhou on a U.S. extradition warrant.

However, the motion is not binding and so doesn’t actually order the government to follow through. 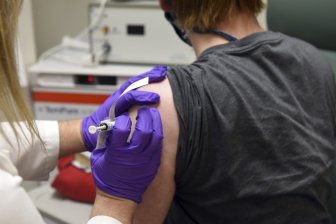 Conservative Leader Erin O’Toole spoke about the motion on Tuesday and pointed to Chinese influence operations as a key threat to Canada.

“There is no greater threat today to Canada’s interest than China’s rise,” said O’Toole.

“The democratic world must acknowledge that the approach to China over the last two decades has not worked. In fact, the situation has only gotten worse over recent years.”

Foreign Affairs Minister Francois-Philippe Champagne said in a speech in the House of Commons on Tuesday that attempts by China and other countries to intimidate people on Canadian soil “will not be tolerated,” and suggested criminal charges are possible.

“The Royal Canadian Mounted Police will continue to investigate, with a view to laying charges under the Criminal Code,” Champagne said. “Canadians can be assured their government takes the threat posed by foreign interference activities very, very seriously.”

Independent MPs Yasmin Ratansi and Jody Wilson-Raybould voted for the motion, while Marwan Tabbara voted against.

–With files from Global News’ Hannah Jackson, Reuters and The Canadian Press