Following a night of political chaos and a shock Tory rebellion, the House of Commons is almost certain to vote to delay Brexit tomorrow – meaning the UK won't quit the EU on March 29 as planned. Mrs May warned that the Commons will now have to choose between a "short technical extension" to give her the chance to get her deal through at the third time of asking – or a long delay which would see Britain taking part in the next European Parliament elections.

She hinted she will hold a third "meaningful vote" on the Brexit deal as soon as next week in a last-ditch bid to convince Tory rebels they must back her or risk Brexit never happpening.

In chaotic Commons scenes, Mrs May lost control of the Brexit process again in the face of a massive Remainer rebellion.

The Prime Minister backed a motion which would have ruled out a No Deal Brexit on March 29 but left it open for a later date.

But in a shock move, MPs instead voted for a more hardline amendment from Tory ex-minister Caroline Spelman, stating that the UK should NEVER leave the EU without a deal.

The Commons supported the Spelman amendment by 312 votes to 308.

Mrs May then reversed her policy – asking Tory MPs to vote AGAINST the main motion instead.

But a large number of pro-Remain ministers rebelled and the call to block No Deal was passed by 321 votes to 278.

The rebels included Cabinet ministers Amber Rudd, David Gauke, Greg Clark and David Mundell, who all abstained – while the Disabilities Minister Sarah Newton quit in order to back the motion.

Tonight's vote is not legally binding – but the PM had already pledged to abide by it anyway. 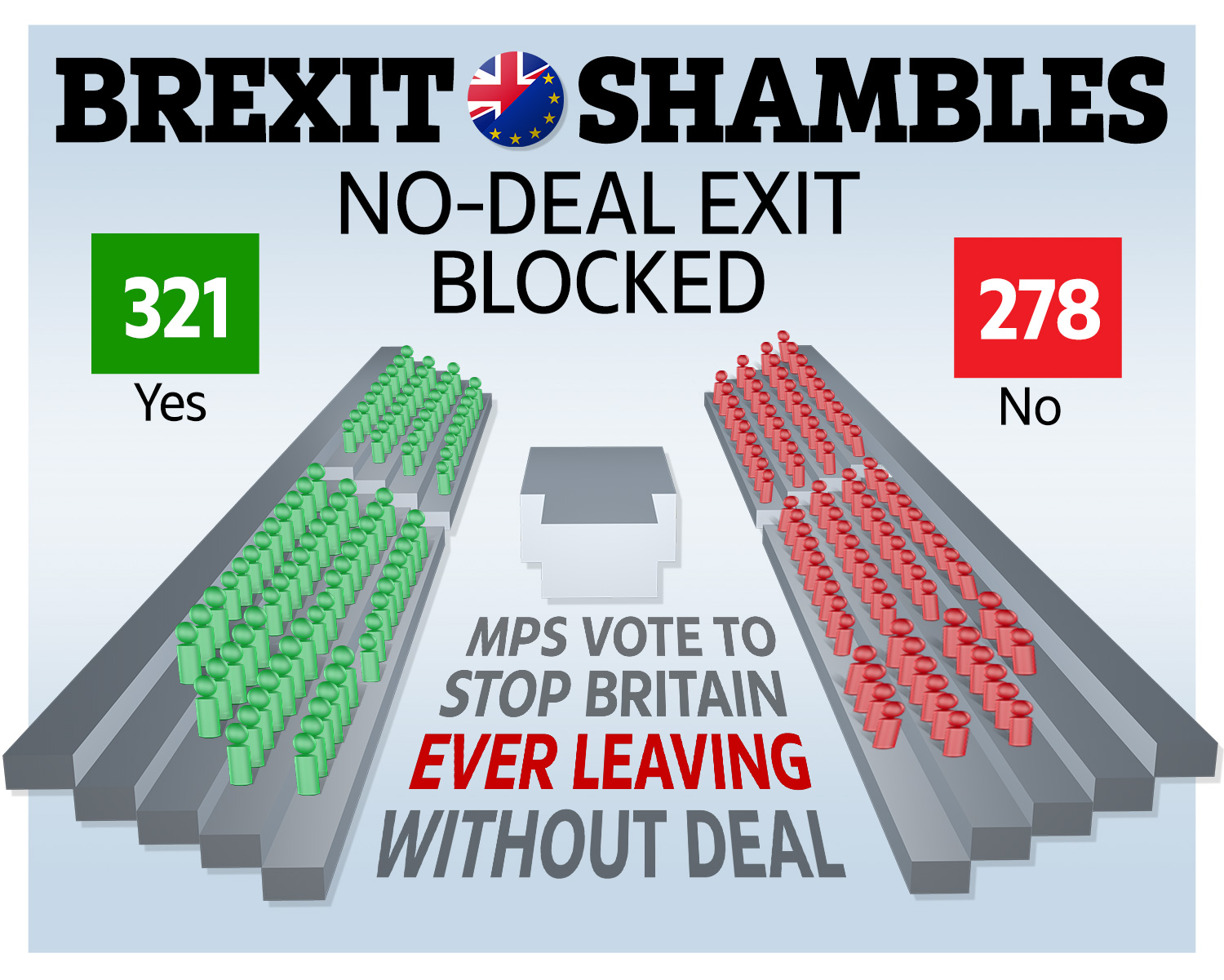 The chaos was another sign the Prime Minister has lost control of the Brexit process and her party – with Tories calling on her to sack the top ministers who failed to support her.

Brexiteer Ben Bradley, who backed Mrs May's deal, fumed: "We just betrayed the promise we made to the electorate. I'm angry, quite emotional really.

"It's incredibly difficult to justify… We promised to leave on the 29th, now Parliament has said we're not going to leave."

He demanded she sack the rebels, adding: "If she doesn't then I think we are in total freefall.

The Commons verdict is a massive blow to Brexiteers who think the UK should quit the EU on time with or without a deal – and it boosts Remainers who want to block Brexit altogether.

Speaking after the vote result was announced, Mrs May confirmed a further motion tomorrow on whether she should seek an extension to the Article 50 process taking us out of the EU.

She warned that a short delay of up to three months will only be possible if it comes after her Brexit deal is approved, giving time to put it into practice.

If the deal is rejected again, Mrs May said the delay would have to go beyond the summer – forcing Britain to take part in the European Parliament elections in May.

She told the Commons: “The legal default in UK and EU law remains that the UK will leave the EU without a deal unless something else is agreed. The onus is now on every one of us in this House to find out what that is.

“The motion will set out the fundamental choice facing this House – if the House finds a way in the coming days to support a deal, it will allow the Government to seek a short, limited technical extension to Article 50 to provide time to pass the necessary legislation and ratify the agreement we have reached with the EU.

“But let me be clear – such a short technical extension is only likely to be on offer if there is a deal in place.

“I do not think that would be the right outcome, but the House needs to face up to the consequences of the decisions it has taken.”

Her statement opens the door to a third formal vote on whether or not to approve her deal next week or the one after.

May loyalist Simon Hart said: "The only course now is another meaningful vote. All other roads go to hell."

Another MP close to the PM said that if the Commons continues to block the deal, "A 21-month extension might well pass tomorrow – effectively the same as allowing a second referendum and Brexit could be over."

Brexiteer Simon Clarke admitted he may end up backing the deal rather than risk staying in the EU, admitting the vote to block No Deal means there's "a gun to my head".

But EU bosses insisted that No Deal remains the default outcome – a spokesman said: "To take no deal off the table, it is not enough to vote against no deal – you have to agree to a deal."

As the chaos raged, it's understood ministers were told they could abstain on the motion without being sacked in a remarkable reversal of usual practice.

A senior Brexiteer was heard shouting in the voting lobby: "Why haven't they been sacked? It's appalling."

Scotland Secretary David Mundell, one of a dozen ministers to abstain, said: "I’ve always opposed a No Deal Brexit. The House made its view clear by agreeing the Spelman amendment, I didn’t think it was right for me to oppose that."

The vote exposed deep splits in the Tory party following fury at the PM's refusal to try and keep No Deal alive.

Boris Johnson hit out at Mrs May's refusal to support No Deal – telling LBC: "I do think that is absurd, this is a fundamental matter of Government policy."

But David Cameron backed the PM, saying: "Obviously, what needs to happen next is to rule out No Deal – that would be a disaster for our country – and to seek an extension, and I'm sure that is what is going to happen next."

Chancellor Philip Hammond openly urged the PM to go for a softer Brexit deal which can win the support of other parties in an extraordinary blow to her authority.

In today's Brexit debate, senior Leavers warned that removing the option of No Deal puts Britain in a much weaker position.

John Redwood said: "This Parliament must allow us to leave on March 29 otherwise it will be the people against the Parliament."

Andrew Bridgen added: "It's not a time to take No Deal off the table, it's a time to keep it there to bring the European Union to heel."

Aides admit the PM is closer than ever to throwing in the towel – but remains adamant she will press on with her current deal.

It's still not clear whether the EU will actually grant Britain an extension to the Brexit process even if the Commons votes to request one tomorrow.