Tourists were quick to see the glacier calving, when a large section of ice breaks away, as they dashed to safety.

Some tourists were seen sprinting away as the giant waves crashed into the shore.

The tourists were accompanied by an expert mountain guide, when the glacier collapsed. 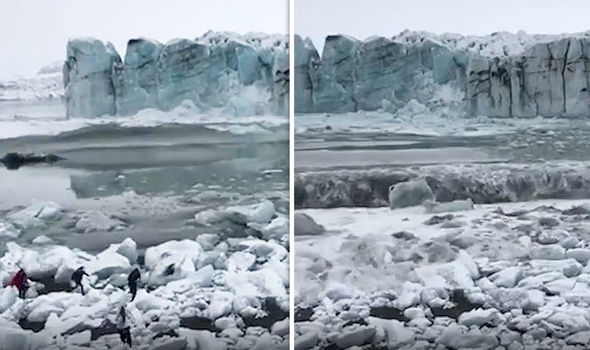 While calvings are fairly frequent at this time of the year, this was an extraordinarily large event

Stephan Mantler, who captured the event on camera, claimed he heard cracking, a sign the glacier was to begin calving.

Mr Mantler, a mountain guide and owner of Icelandic tour company Hafjall, made sure the tourists were safe as he continued filming.

He said that he could see the tourists move to safety and claimed guides were ready to support them if necessary.

He told CNN: “While calvings are fairly frequent at this time of the year, this was an extraordinarily large event and much closer to the shore than usual, which is why it was such a close call.

“In the end, most importantly, nobody got hurt or even wet.”

Mr Mantler said the tourists were briefed on what to do if a glacier started calving.