Trainspotting author Irvine Welsh has branded Parcelforce as ‘Parcelfarce’ after a delivery driver stuck a card through his door while he was home.

The Scottish author went online to rant about the ‘impressive nonsense’ of delivery drivers who take packages away without bothering the ring the doorbell.

Welsh, 60, is believed to have suffered the common consumer bugbear at his home in Miami, Florida, when Parcelforce Worldwide tried to make a delivery.

He posted yesterday: ‘Love the way Parcelforce put a card through your door when you’re at home, without ringing the bell, telling you they can’t deliver your package but you can collect it at the depot (whereabouts that is the card doesn’t say.)’ 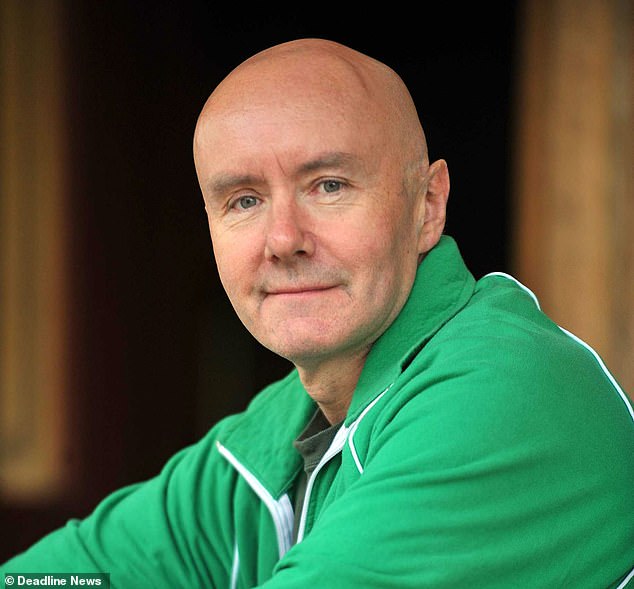 Welsh, 60, (pictured) is believed to have suffered the common consumer bugbear at his home in Miami, Florida, when Parcelforce Worldwide tried to make a delivery 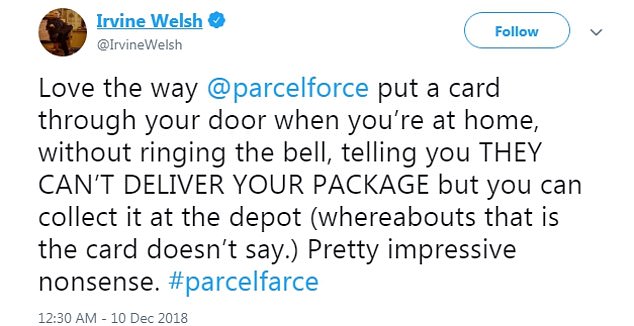 He added ‘Pretty impressive nonsense’ before writing the hashtag ‘Parcelfarce’.

One, @matthew-maddock, from Stamford, Lincolnshire, added: ‘That’s happened to me a few times. I even ran after the postie and asked for the parcel.

He didn’t even have it. No apology or explanation.’

Also @JohnShenton1892, from Western Australia, said: ‘Did it to me here in Perth. The nearest depot was 37km away.’

Another, @paddybah, from East Kilbride, South Lanarkshire, wrote: ‘Trained in the ways of the Ninja. They silently deposit the ‘you were out’ card and, un-detected, they slip away. Unheard by you, unseen by neighbours.’

Other users decided to share their experiences with different delivery companies.

‘Royal Fail don’t even try,’ one wrote. ‘I’ve been sat in the house many times and got the card. The queue at the depot is proof enough. Sh**e.’

And @romannosaint, from Blyth Bridge, Scottish Borders, added: ‘Not just parcel force, DPD-UK did the exact same thing to me last week.

‘Redelivered the next day and somehow the parcel was miraculously small enough to be posted through my letter box without me having to sign for it.

‘Please can I take your parcel number and a telephone number so I can have the depot investigate this asap? My apologies for the inconvenience caused.’

Welsh thanked the customer service agent who responded to his rant and provided the parcel number for his delivery, writing ‘Eh…thank you Sarah, but no to my phone number

Welsh thanked the customer service agent and provided the parcel number for his delivery, writing ‘Eh…thank you Sarah, but no to my phone number.

That prompted one person to allege the company responded differently to ‘famous people’ and ordinary people.

A user posted: ‘Love how these courier companies respond to famous people and ignore the rest of us.’

Last year it was reported that two thirds of online shoppers have had parcels lost, damaged or arrived late according to a survey conducted by Citizens Advice. 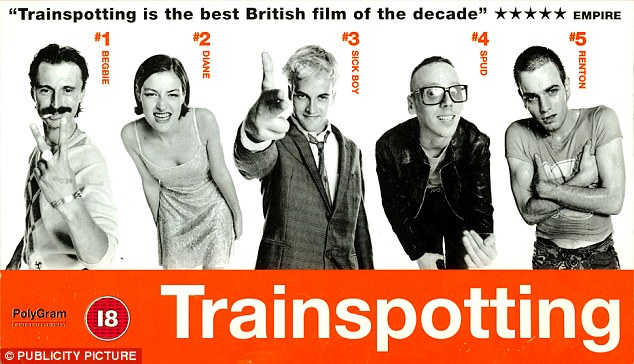 Welsh wrote Trainspotting, which was later turned into a film directed by Danny Boyle

A frequent complaint is customers waiting at home for a parcel only to receive a note saying they were out when the delivery driver called.

However, the most common complaint received by Citizens Advice were parcels being left in rubbish bins.