Tree that killed driver and left four injured was ‘very old, and very dead’ when it collapsed onto car on Surrey motorway

A giant tree which fell on a car and killed a passenger was ‘very old and very dead’, it was revealed today.

Four other motorists were rushed to hospital after the tree collapsed into an A-road and struck a silver Lexus car on Sunday afternoon.

Police and fire crews rushed to the scene in Egham, Surrey but a man was pronounced dead following the arrival of paramedics.

At the scene today, tree surgeons were still working on hacking down what remained of the enormous tree, as a huge trunk stood severed behind them. 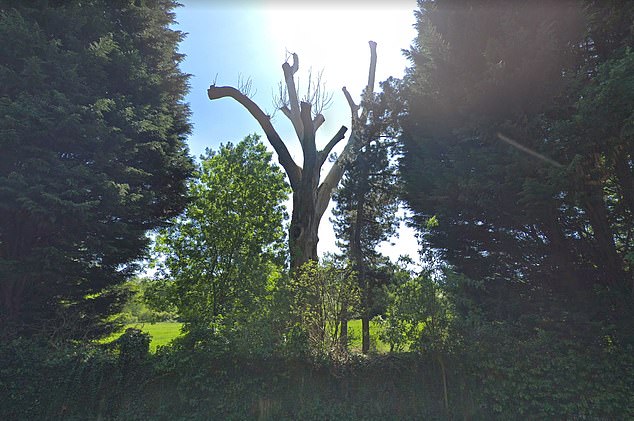 A giant tree (believed to be pictured here before it fell) which fell on a car and killed a passenger was ‘very old and very dead’, it was revealed today 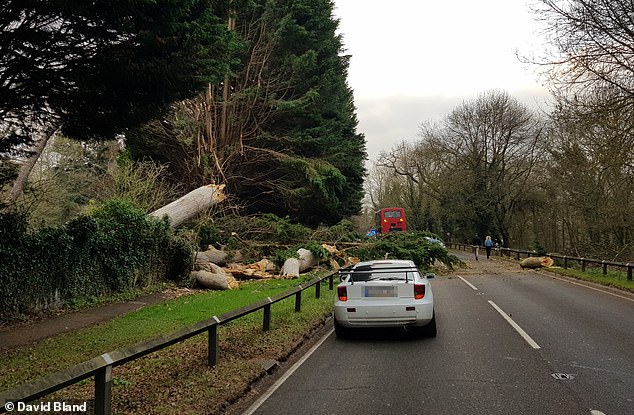 The incident took place in Egham around 4.05pm on the A308 Windsor Road (pictured: The aftermath of the incident)

Experts confirmed that they had no fears about further incidents involving trees along the road, which was still cordoned off 24 hours later.

A neighbour living near the scene, who did not wish to be named, said: ‘I spoke to a guy who was in the car behind.

‘He was clearly in shock and seemed in distress at what had happened.

‘I spoke to a police officer later who referred me to Google Maps, where you could see a very old, and very dead, tree.

‘I knew it was a silver car with five people in it, but nothing more than that I’m afraid.’

The incident took place on the A308 Windsor Way in Egham, Surrey, at about 4:05pm on Sunday. 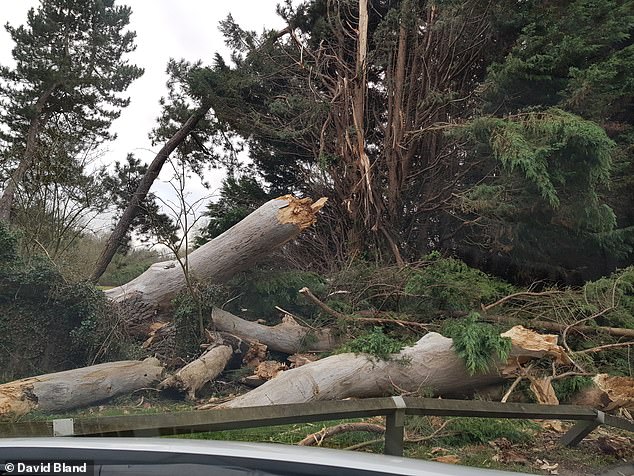 Surrey Fire and Rescue said that the A308 Windsor Road in Egham is closed, and likely to remain closed into the morning through rush hour

A barman in a nearby Harvester restaurant said: ‘I arrived at work shortly after it happened and saw flashing lights rushing past the windows.

‘I spoke to a guy who heard a massive bang, turned around and saw the tree on top of a car – he said he had only walked beneath it just a few moments before.

‘He said he couldn’t eat his dinner afterwards, he was so shocked.’

Speaking yesterday, a spokesman for Surrey Police said: ‘A man has sadly died after a tree fell on the car in which he was travelling in Egham on Sunday.

‘The collision, involving a silver Lexus, occurred around 4.05pm on the A308 Windsor Road at the junction with the Runnymede roundabout.

‘One of the passengers was pronounced dead at the scene. The four other occupants in the car have been taken to hospital where they are receiving treatment for minor injuries.’

It is not currently known who owns the tree. Surrey County Council has been contacted for comment.