Tropical Storm Cristobal is the third named storm of Atlantic Hurricane season, and has triggered a wealth of warnings for the southeastern US coast. Meteorologists are forecasting Cristobal to make landfall on Sunday, bringing heavy rain and strong winds.

Phil Klotzbach, a meteorologist at CSU, said on Twitter: “The earliest calendar year landfalling named storm in Louisiana on record (since 1851) is Tropical Storm Arlene on May 30, 1959.

Cristobal is forecast to make landfall somewhere between Marsh Island to Slidell, Louisiana.

However, forecasters are warning this does not mean locations outside of this area need not pay attention. 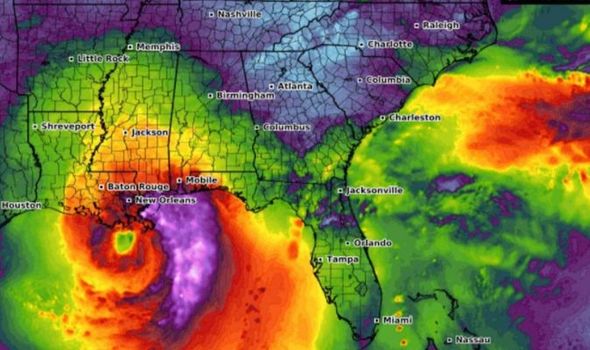 Cristobal could also cause tornados along the warning area according to experts.

“Landfalling tropical systems from the Gulf of Mexico produce more tornadoes than their counterparts making landfall along the Atlantic coast, largely because the right-front quadrant (where most tornadoes are found) is located completely onshore.”

Tropical storm warnings are posted for much of the Louisiana coastline, Mississippi, Alabama and portions of the Florida panhandle. 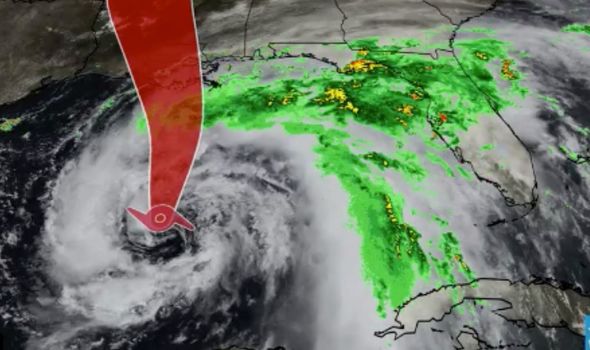 A Storm Surge Warning is in effect for

A Storm Surge Watch is in effect for

A Tropical Storm Warning is in effect for

The National Hurricane Centre (NHC) tweeted: “Tropical Storm #Cristobal Advisory 24A: Cristobal Slows Down as it Approaches the Coast of Louisiana.

The service also tweeted to warn of the hazards caused by Cristobal. The NHC said: “One significant hazard with #Cristobal is flash flooding.

“The @NWSWPC is highlighting a large area of concern from SE Louisiana/S Mississippi northward through Arkansas and beyond.” 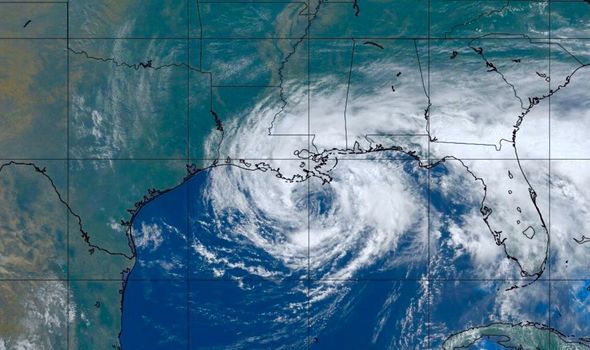 As of 1pm CDT (7pm BST), the NHC reported centre of Tropical Storm Cristobal was located around 30 miles south-southeast of Grand Isle Louisiana, and around 90 miles south of New Orleans, Louisiana.

The NHC reported Cristobal is moving toward the north near five mph, and this general motion is expected to continue today, followed by a gradual turn toward the north-northwest late today or tonight.

On the forecast track, the centre of Cristobal will approach the northern Gulf of Mexico coast this afternoon, then move inland across Louisiana late today through Monday morning, and northward across Arkansas and Missouri Monday afternoon into Tuesday. 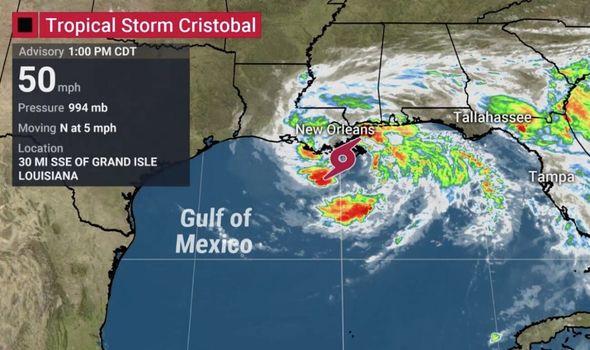 Little change in strength is forecast before landfall. Gradual weakening will begin once Cristobal moves inland.

Tropical-storm-force winds extend outward up to 205 miles (335 km), mainly to the east of the centre.

During the past few hours, an oil rig located about 80 miles south of Mobile, Alabama, measured a sustained wind of 58 mph and a gust to 64 mph (103 km/h) an elevation of 53 ft.

Widespread rainfall along the coast will likely around five to 10 inches, with some areas picking up at least a foot.

These numbers alone would trigger flooding, adding to the already excessive rainfall the states in the warning areas have been dealing with.

This will exacerbate the flooding concern for states such as Louisiana, Arkansas, and Florida, which have already received at least eight to 10 inches in just the last 30 days.