First Lady Melania and President Donald Trump have participated in a traditional ceremony with the Irish Prime Minister to mark St. Patrick’s Day, receiving a bowl of shamrock from the Irish leader.

Taoiseach Leo Vadakar, as the Irish premier is properly titled, attended the ceremony in the East Room of the White House on Thursday evening.

The tradition dates back to 1952, when Irish Ambassador John Joseph Hearne delivered a box of shamrocks to Harry Truman’s White House on the feast day of Ireland’s patron saint, which this year falls on Sunday.

The bowl presented to Trump was made at Kilkenny Crystal in Callan, the home town of Irish-American architect James Hoban. 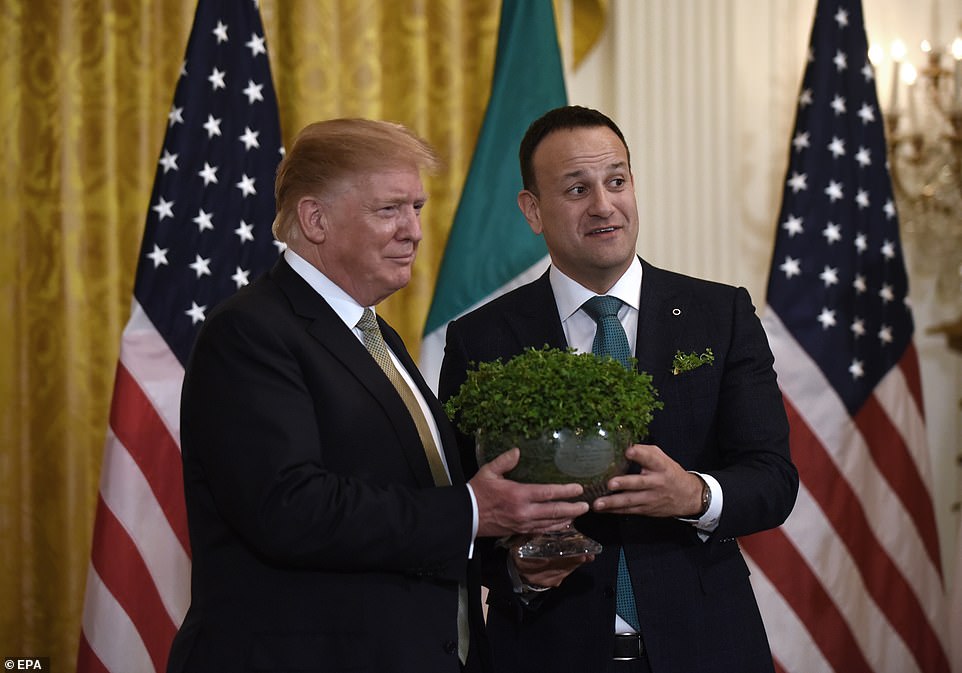 President Donald J. Trump and Irish Taoiseach Leo Varadkar participate in the Shamrock Bowl Presentation in the East Room of the White House in Washington, DC on Thursday 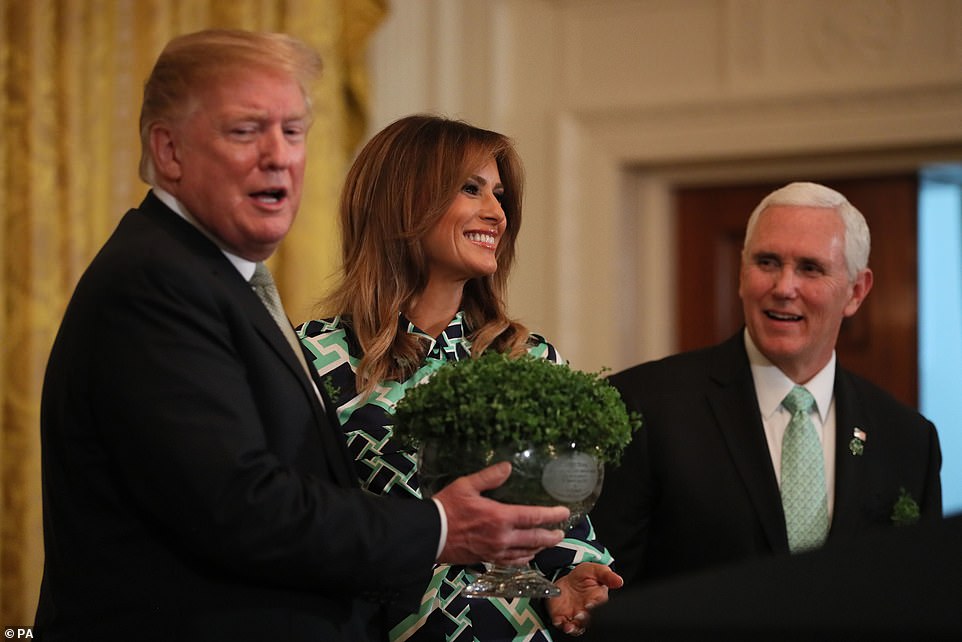 Trump was flanked by First Lady Melania and Vice President Mike Pence for the ceremony, which dates back to 1952 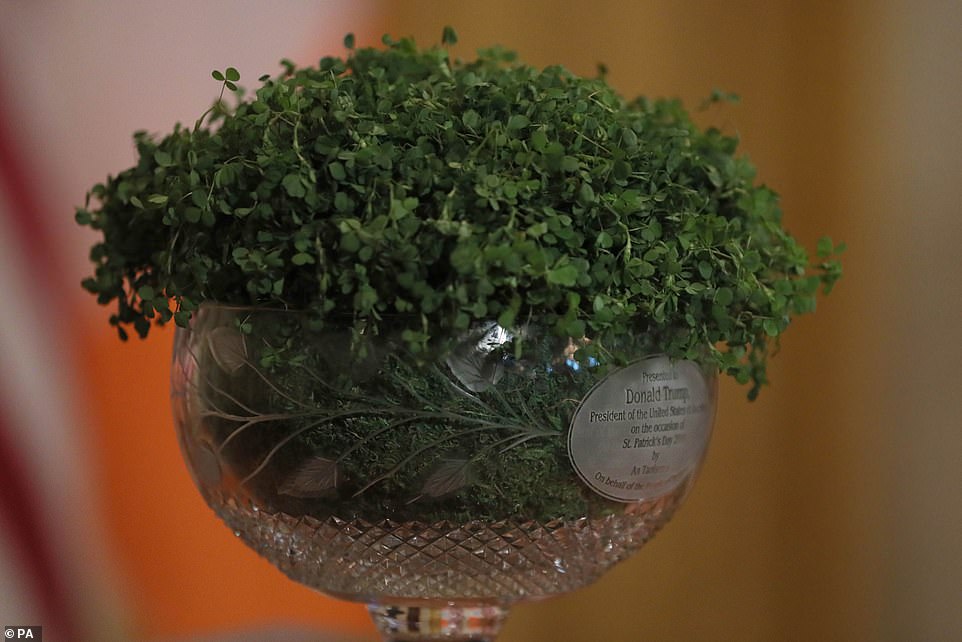 The bowl presented to Trump was made at Kilkenny Crystal in Callan, the home town of Irish-American architect James Hoban, who designed both the White House and Ireland’s house of parliament, Leinster House

Hoban designed both Leinster House in Dublin, the seat of the Irish parliament, and the White House.

Trump, who was joined on stage by Vice President Mike Pence, said that millions of Americans across the country celebrate the ‘inspiring’ Irish people on St Patrick’s Day.

He also welcomed the Taoiseach’s boyfriend Matt Barrett, who also attended the event.

Vadakar made history as Ireland’s first gay prime minister, as well as the first of Indian descent. 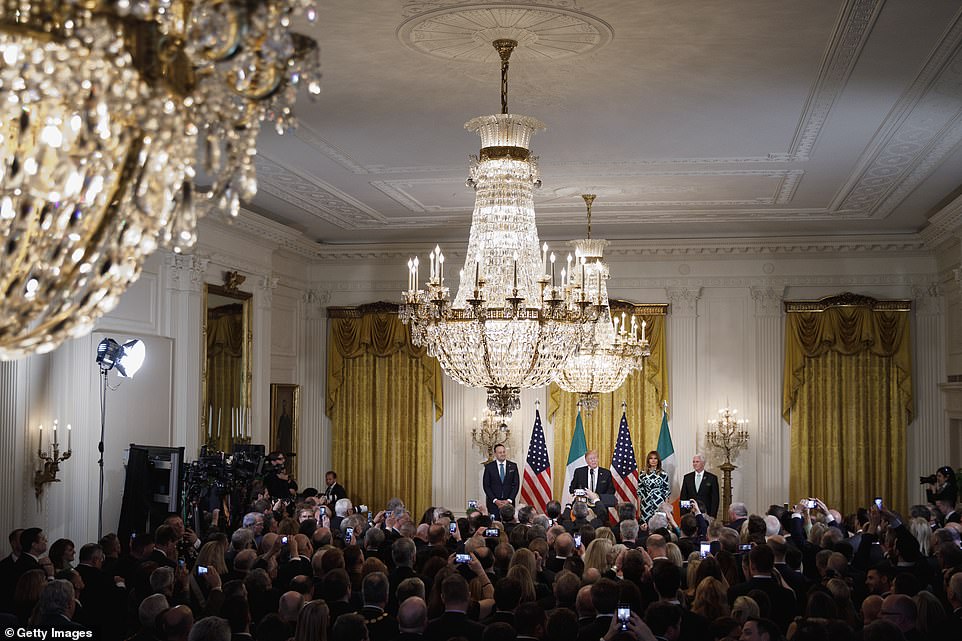 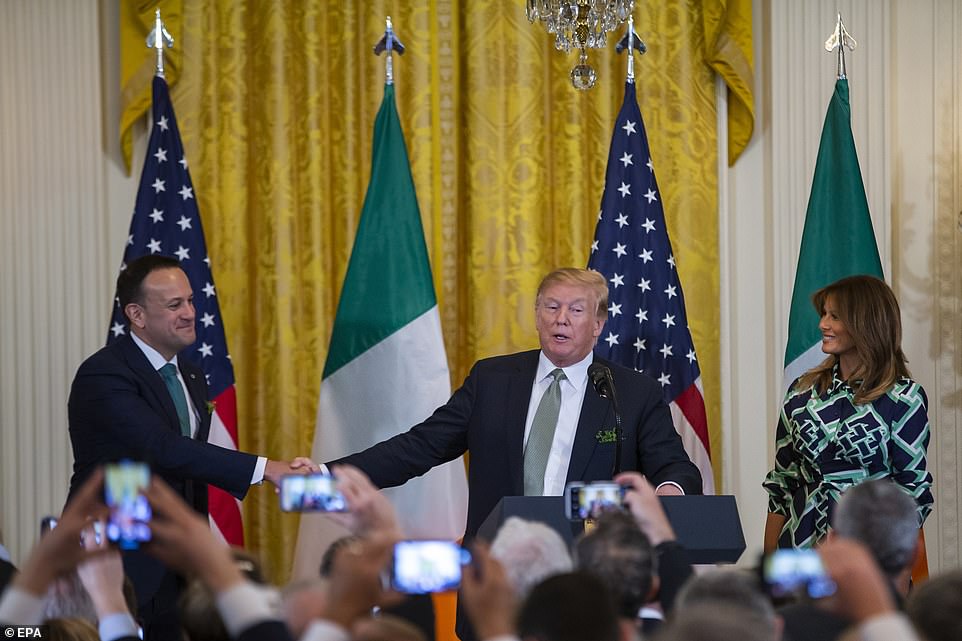 In his remarks, Trump said that millions across the US celebrate the ‘inspiring’ Irish people on St Patrick’s Day 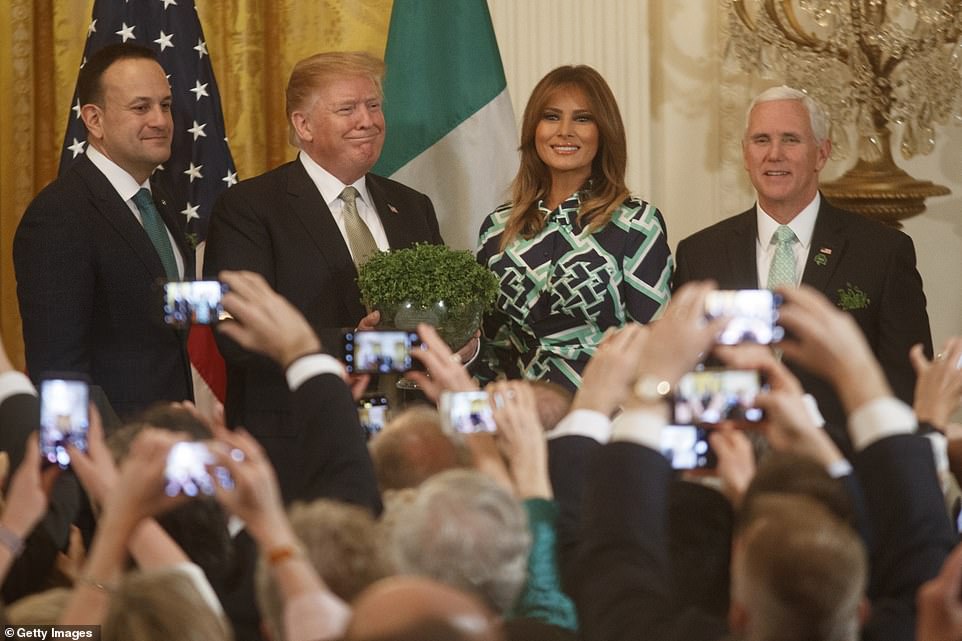 Trump also called the Irish ‘brutal enemies’ adding ‘You don’t want to fight with the Irish, it’s too tough, it’s too bloody’

‘You don’t want to fight with the Irish, it’s too tough, it’s too bloody.’

He reminded the crowd that the shamrock tradition began almost 70 years ago when Ireland’s first ambassador to the United States, John Hearne, gave then US president Harry Truman a small box of it.

He added that he accepted the gift as a symbol of America’s ‘enduring friendship’ with Ireland. 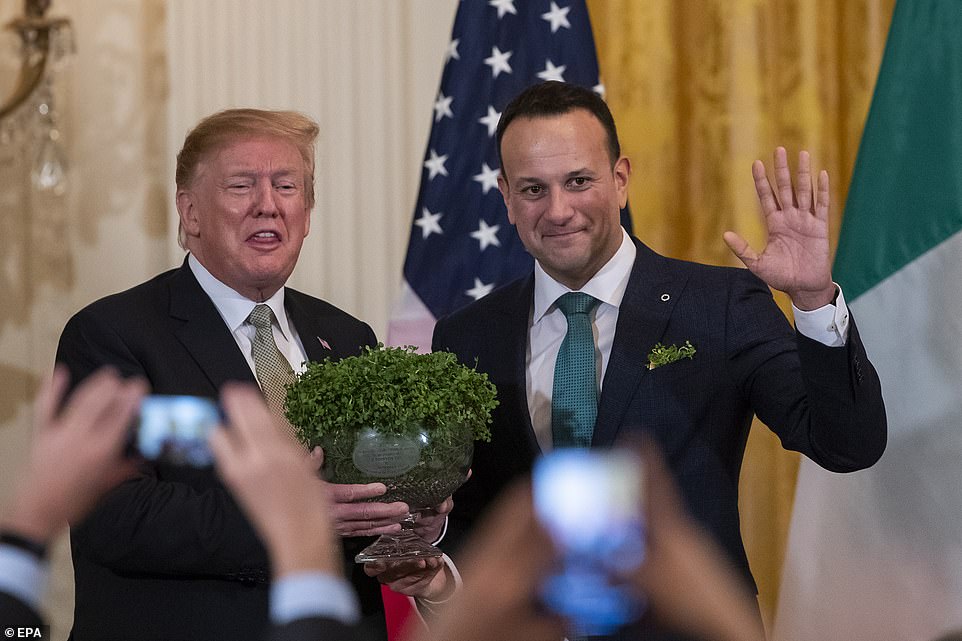 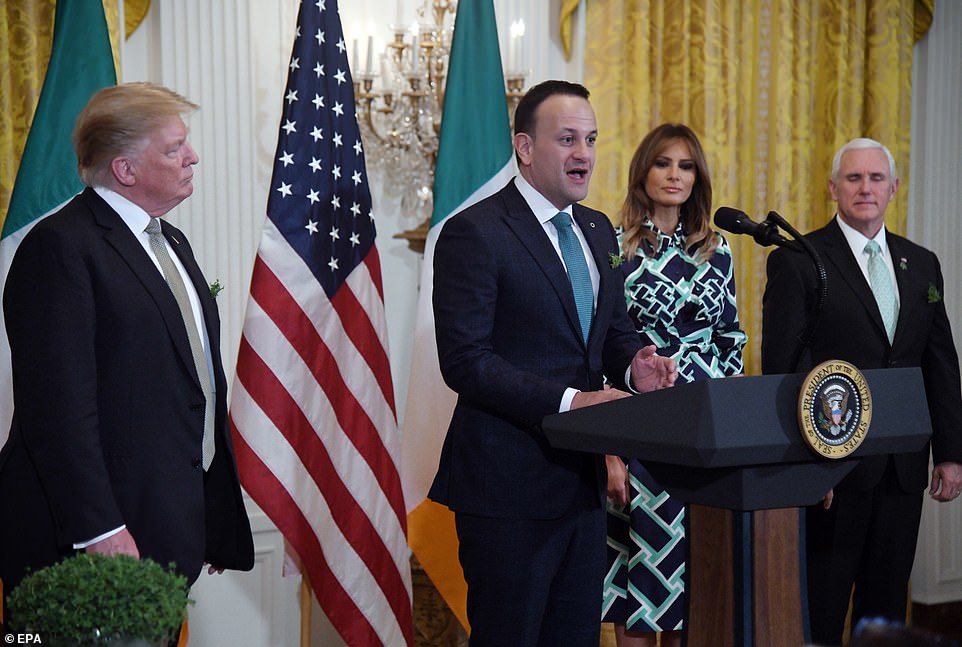 Varadkar praised America for ‘your people, your values, a new nation conceived in liberty’ 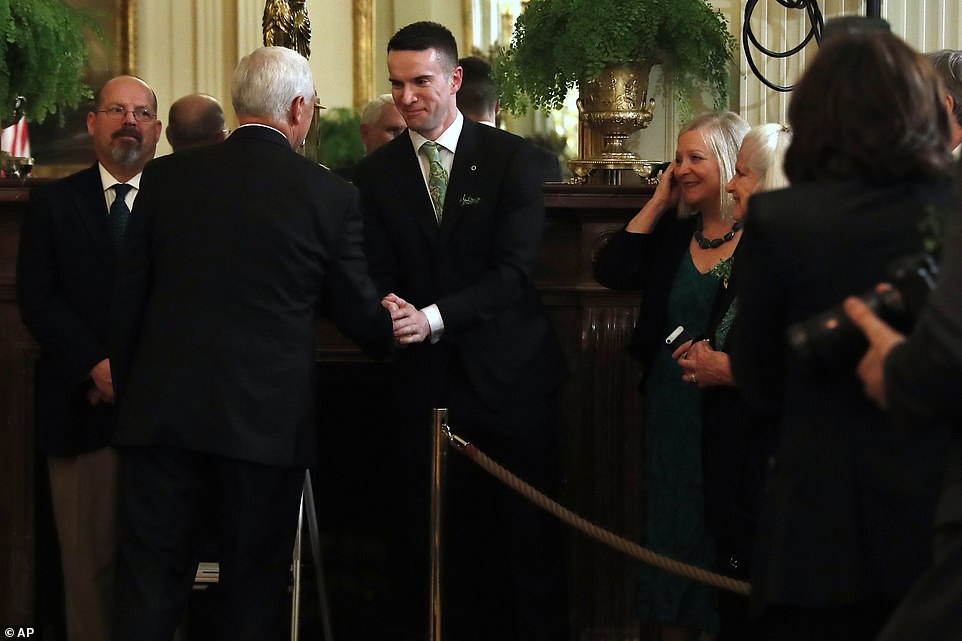 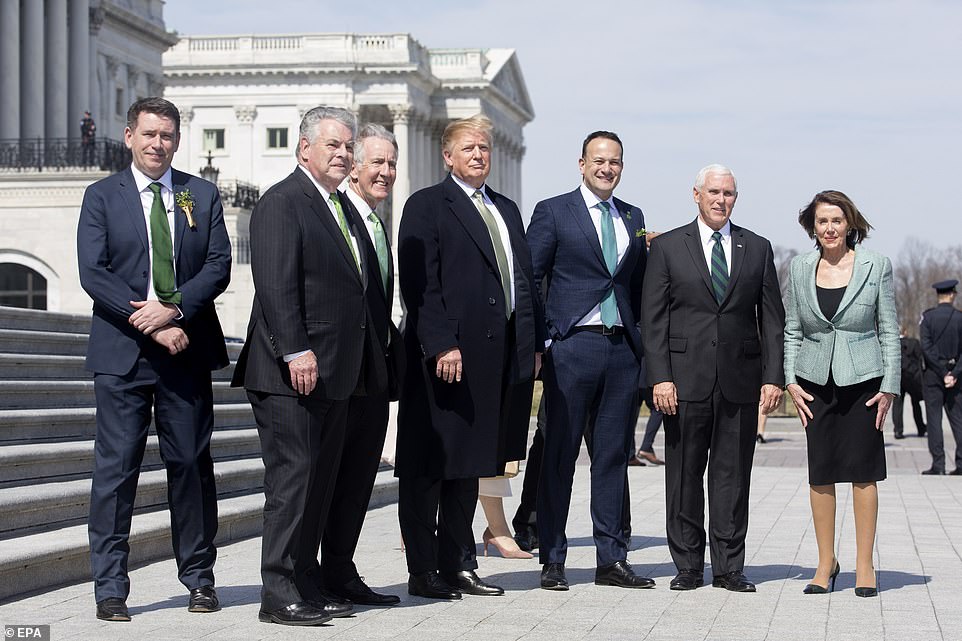 For his part, Varadkar described US military power as ‘unrivalled’.

‘However, I believe the greatness of America is about more than economic prowess and military might.

‘It is rooted in the things that make us love America – your people, your values, a new nation conceived in liberty. The land and the home of the brave and the free.’ 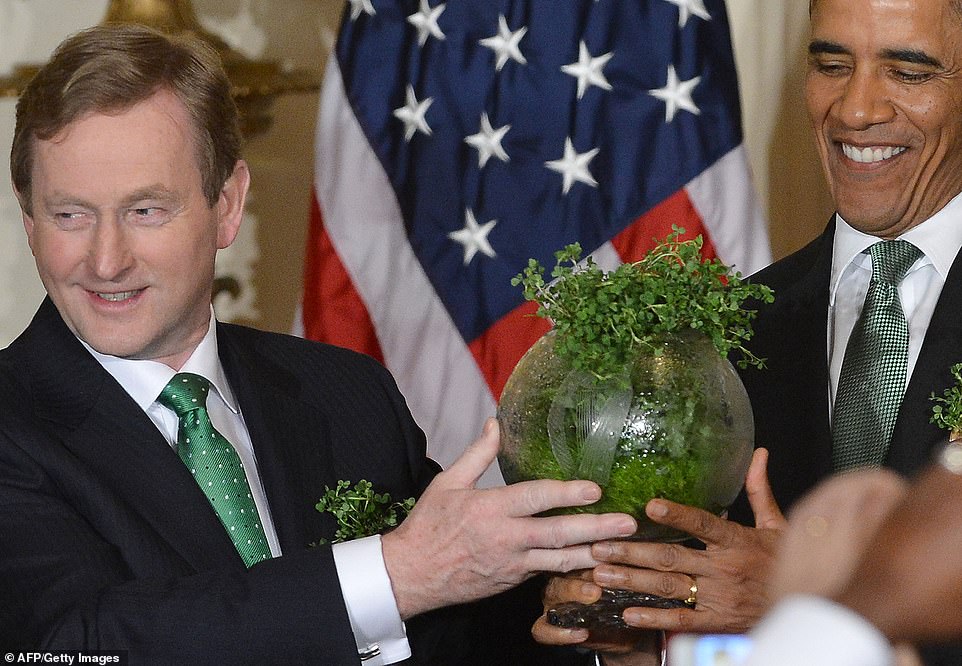 In 2013, Irish Prime Minister Enda Kenny presents a bowl of shamrock to US President Barack Obama 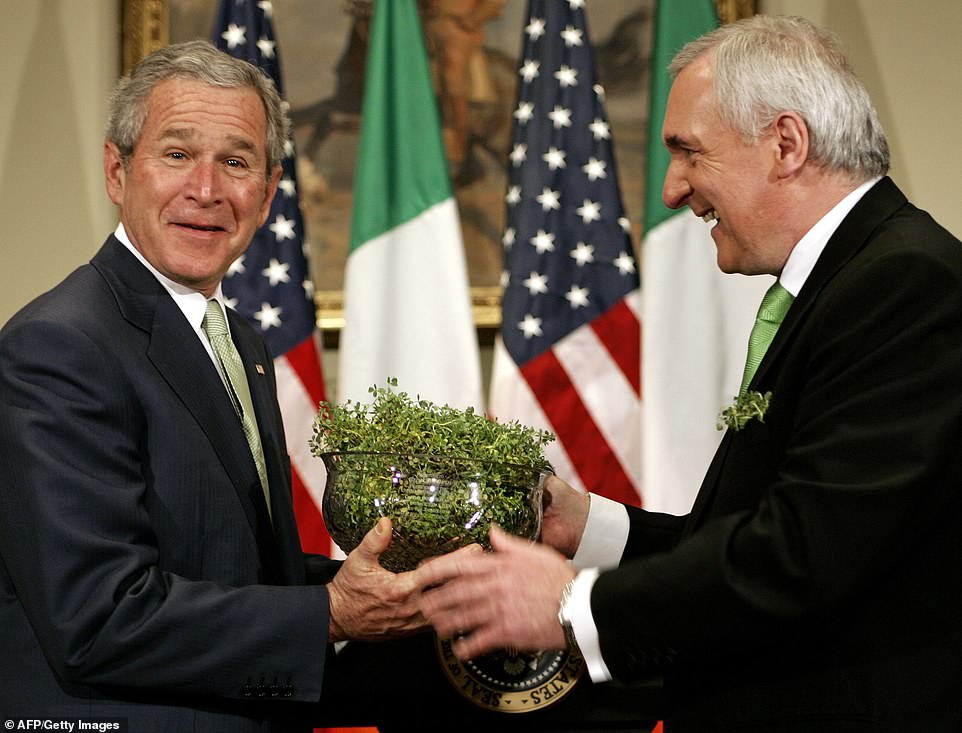 The Taoiseach added that the futures of the US and Ireland were entwined.

‘I believe that future generations of our citizens should have the same opportunity to enrich one another’s societies as past generations have,’ he said.

The event marked the end of Varadkar’s trip to Washington DC before he travels to Chicago on Friday for the second part of his St Patrick’s trip.

Earlier in the day, Trump said that he plans to visit Ireland later this year.