New York: US President Donald Trump has called for an end to the politics of "revenge, resistance and retribution" in his second State of the Union address, warning Democrats they could damage the US economy if they launch too many investigations into his administration.

Trump book-ended his speech, which was delayed by a week because of a 35-day federal government shutdown, with pleas for unity and requests for politicians of both parties to work together to solve the nation's most pressing problems.

But he soon moved on to some of the issues that most divide Americans – immigration and abortion – in a speech that drew chants of "USA" from Republicans and audible jeers from Democrats. 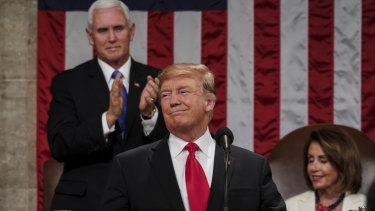 Trump also confirmed he would meet later this month in Vietnam with North Korean leader Kim Jong-un for a second summit on ending the country's nuclear weapons program.

Citing an "urgent national crisis" at the southern border, Trump used the speech to lay the groundwork to declare a national emergency and build a wall without congressional approval.

The ongoing high-stakes fight over immigration made this year's presidential address one of the most important in recent history.

Congress has just ten days left to pass an immigration deal before the federal government is due to close again, and Democrats are resisting Trump's demands to fund a physical barrier on the border.

Congressional Republicans have also been increasingly willing to break with the President on policy and Trump's poll numbers fell during the shutdown.

"In the past, most of the people in this room voted for wall, but the proper wall never got built," Trump said. 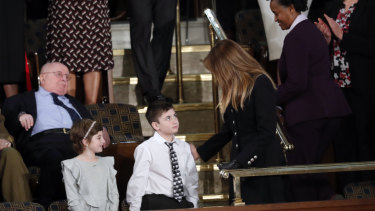 Guests Grace Eline and Joshua Trump, no relation, greet first lady Melania Trump before Donald Trump delivers his speech. Joshua was invited on the account of bullying he has suffered for his surname.Credit:AP

Among the guests Trump invited to hear the speech were American families whose relatives had recently been killed by illegal immigrants.

Trump said his wall would be "smart, strategic, see-through steel barrier – not just a simple concrete wall" and would be built where experts say it will be most useful in stopping illegal immigration.

"The lawless state of our southern border is a threat to the safety, security and financial wellbeing of all Americans," he said.

"We have a moral duty to create an immigration system that protects the lives and jobs of our citizens."

Trump's speech was his first address to Congress since the November midterm elections ushered in a new era of divided government in Washington.

Seated behind Trump was the Democratic House Speaker Nancy Pelosi, who earlier this month told Trump he could not give his speech to Congress until the government reopened. 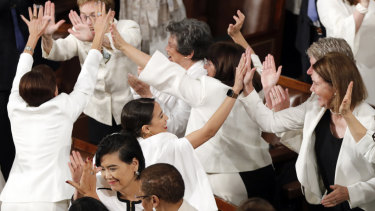 All in white in the house: Democrat congresswomen, including Alexandria Ocasio-Cortez, centre, cheer after President Donald Trump acknowledges more women in Congress during his State of the Union address.Credit:AP

Like many Democratic members of Congress, Pelosi wore white in a nod to suffragettes who campaigned for gender equality.

Hailing the strong state of the US economy, which created 304,000 jobs last month alone, Trump urged members of Congress to "embrace the boundless potential of cooperation, compromise and the common good".

"We must choose between greatness or gridlock, results or resistance, vision or vengeance," he said.

"An economic miracle is taking place and the only thing that can stop it are foolish wars, politics or ridiculous partisan investigations.

"If there is going to be peace and legislation, there cannot be war and investigation."

Democrats have said they will use their majority in the House of Representatives to investigate Trump's ties to Russia and to force him to release his tax returns. 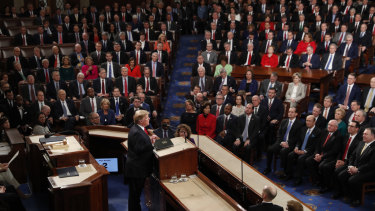 President Donald Trump delivers his 2019 State of the Union address to a joint session of Congress on Capitol Hill.Credit:AP

Trump voiced his opposition to recent laws passed in New York making it easier for women to have late-term abortions.

"To defend the dignity of every person, I am asking Congress to pass legislation to prohibit the late-term abortion of children who can feel pain in the mother's womb," he said, drawing a standing ovation from Republicans.

"Let us work together to build a culture that cherishes innocent life." 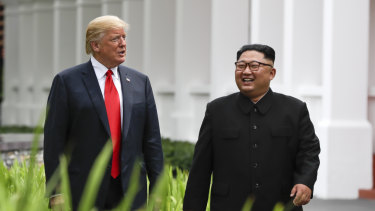 On foreign policy, Trump said that America would be in a "major war" with North Korea if he had not been elected President.

He will meet with Kim Jong-un in Vietnam on February 27 and 28.

Trump defended his decision to withdraw US troops from Syria and seek a political settlement in Afghanistan, saying: "Great nations do not fight endless wars."

Trump's speech drew praise from some congressional Republicans who regularly criticise him.

Utah senator Mitt Romney said: "The President’s speech was strong, well-delivered, and appealed to our patriotism and common values as Americans."

Stacey Abrams, who last year narrowly lost a bid to become governor of Georgia, delivered the Democrats' official response to the speech.

She said that while she was “disappointed” with Trump’s approach to governing, “I still don’t want him to fail”.

“But we need him to tell the truth, and to respect his duties and the extraordinary diversity that defines America,” she said.