Mick Mulvaney is the third person to fill the position in three years after US president fired two previous officials. 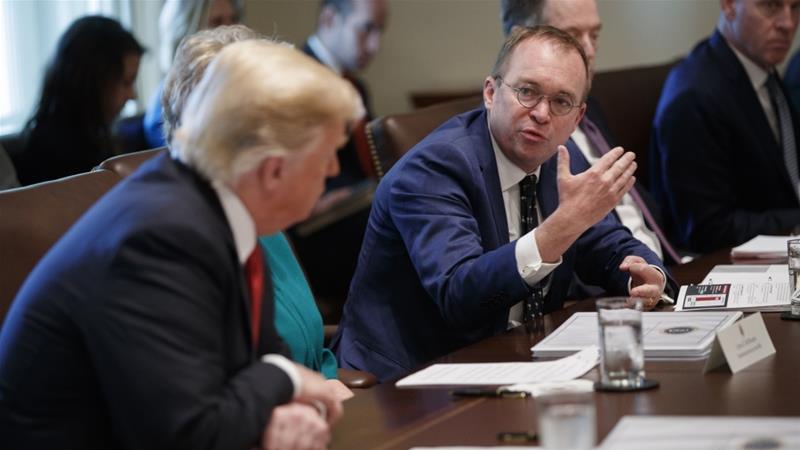 US President Donald Trump has been fielding suggestions from allies on who might succeed his acting chief of staff, Mick Mulvaney, amid frustration at his team’s response to the Democrats’ impeachment inquiry, two sources close to the White House said on Monday.

Trump’s irritation at being dogged by a variety of issues – from impeachment to his decision to move US troops out of northeastern Syria – was on display on Monday in the White House Cabinet Room as the president aired his grievances at length before his senior advisers and a group of reporters.

The president has been focused in part on Mulvaney’s comments to reporters last week that Trump had withheld military aid from Ukraine in an effort to get Kiev to investigate a debunked claim about the 2016 US election.

A television interview on Sunday in which Mulvaney tied Trump’s now-reversed decision to host G7 leaders at his resort near Miami to a feeling by the president that he was still in the hospitality business was also seen as falling flat.

“The president expressed some concern after Mick’s difficult week,” said one of the sources, who spoke on condition of anonymity.

Whether Trump will actually replace Mulvaney is uncertain. The president blows hot and cold with his advisers and has had difficulty filling some top positions. As recently as last week, he publicly expressed “a lot of confidence” in Mulvaney’s performance.

Senior staff members applauded Mulvaney during a morning meeting on Monday in a show of support for the acting chief of staff, who is a popular figure within the West Wing, two White House officials said.

The sources close to the White House, however, said Trump had been talking to allies about who he could put in the position should he decide to make a change.

Two names being discussed, senior advisers Jared Kushner and Kellyanne Conway, have turned the job down in the past.

A third name suggested was that of Matthew Whitaker, who was acting attorney general earlier this year. Kushner is Trump’s son-in-law.

Trump has a long history of growing weary of top advisers. Mulvaney, 52, was named by Trump to be acting chief of staff last January, after Trump parted ways with retired General John Kelly, who had replaced Reince Priebus as chief of staff.

The president has been frustrated at the White House’s response to the Democrats’ attempt to remove him from office through impeachment, a number of sources have said.

Mulvaney was taking a measure of blame for attempts to hire former South Carolina congressman Trey Gowdy to serve as an outside legal adviser to Trump on impeachment.

Days after Gowdy’s hire was announced, Trump was forced to admit that Gowdy would not be able to join the team until January because of lobbying rules.

The impeachment fight could well be over by that point.