Trump HUGS flag as he is applauded for illegal immigration speech

Donald Trump was filmed hugging a US flag as he soaked up applause following a speech in which he railed against illegal immigration.

The President blasted Mexico for failing to stop migrants from reaching the border, said America has ‘no border security’, and repeated his claims that violent gangsters and drug dealers are being allowed into the country.

He also attacked the Democrats for family separations at the US border, said legal loopholes are encouraging families to being children with them, and claimed smugglers are providing children to people who do not already have them. 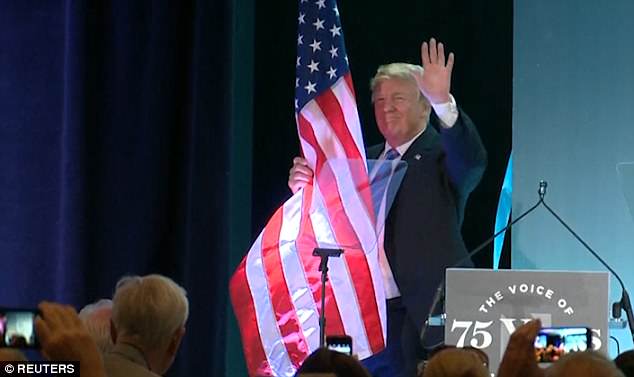 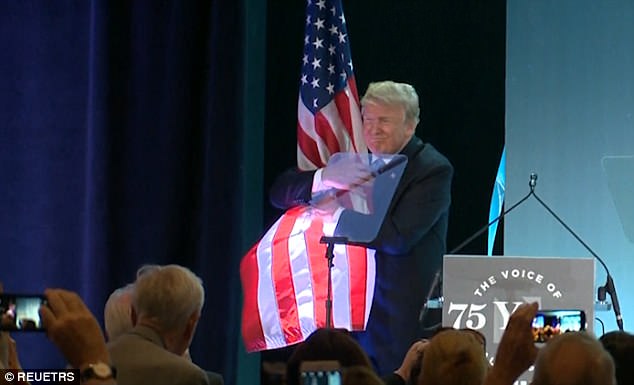 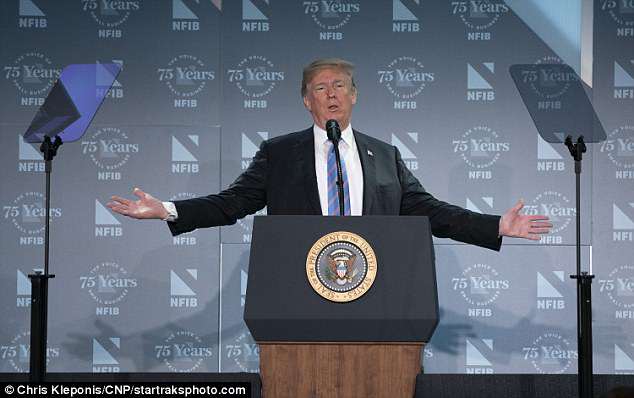 During his speech to the National Federation of Independent Business, Trump also attacked trade deals with Canada and the North American Free Trade Agreement

Attendees at the National Federation of Independent Business applauded throughout his speech, before a lengthy final round of applause at the end.

While being clapped off the stage, Trump walked over to an American flag sitting nearby before embracing it, to further applause.

The move harks back to the 2016 campaign trail, when Trump hugged flags during a town hall event in New Hampshire and a rally in Florida.

During his speech, Trump said: ‘As a result of Democrat-supported loopholes in our federal laws, most illegal immigrant families and minors from Central America who arrive unlawfully at the border cannot be detained together or removed together, only released.

‘Try staying in Mexico for a couple of days. See how long that lasts. Okay?’ 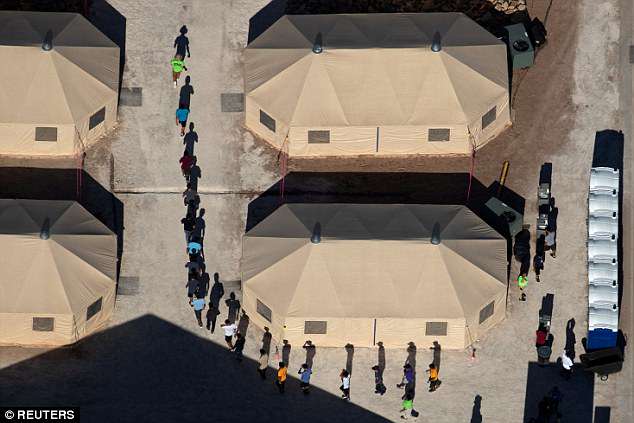 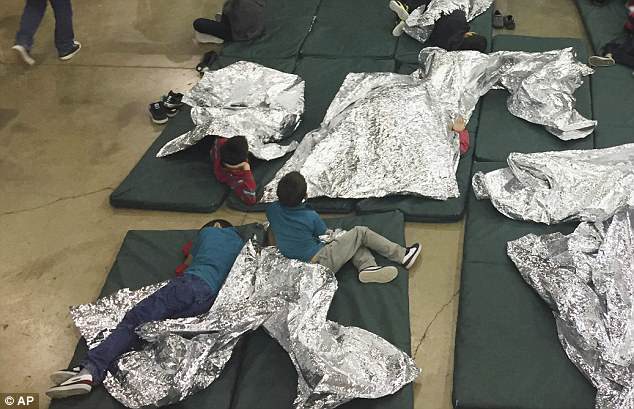 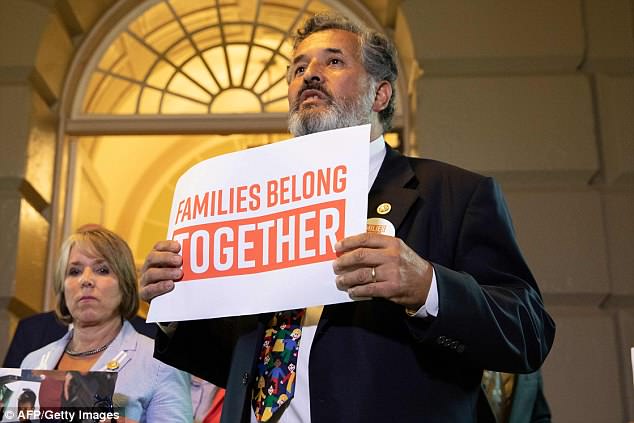 Democrats staged a protest against the policy on Capitol Hill on Tuesday night, as politicians from both sides of the aisle criticized Trump

He added: ‘We have no wall and we have no protection. The drugs that are coming in from Mexico and through the southern border is disgraceful.’

Trump said that he’d be championing legislation to make sure that families that are flooding the border from Central America are not being separated as he lit into lawyers for migrants and judges he claimed are abusing the system.

‘We want a great country. We want a country with heart,’ Trump said. ‘But when people come up, they have to know they’re not going to get in. Otherwise it will never stop.’

The president said he doesn’t like that children are being separated from their legal guardians- even though it’s a policy that was implemented by his administration. 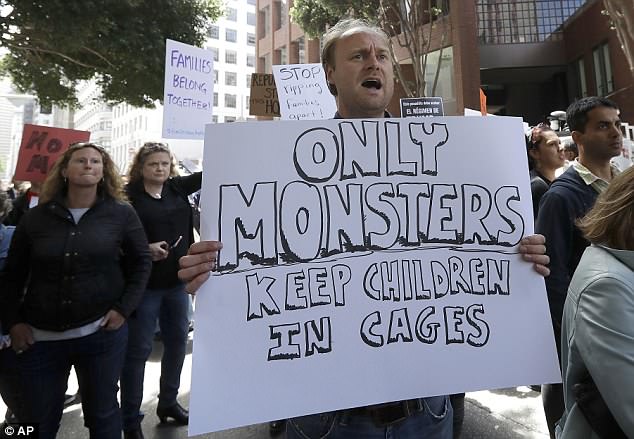 Demonstrations against family separation also took place across America on Tuesday, including in San Francisco (pictured) 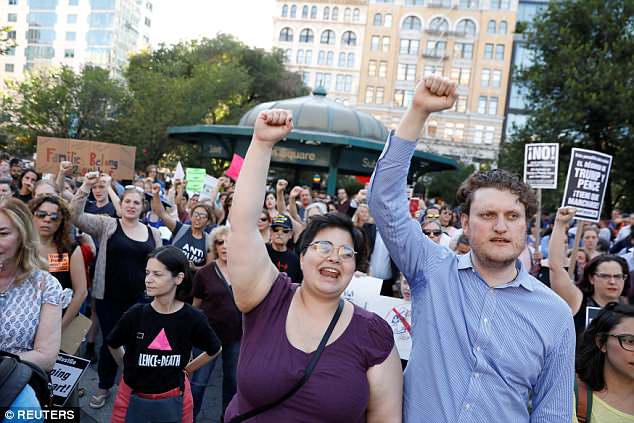 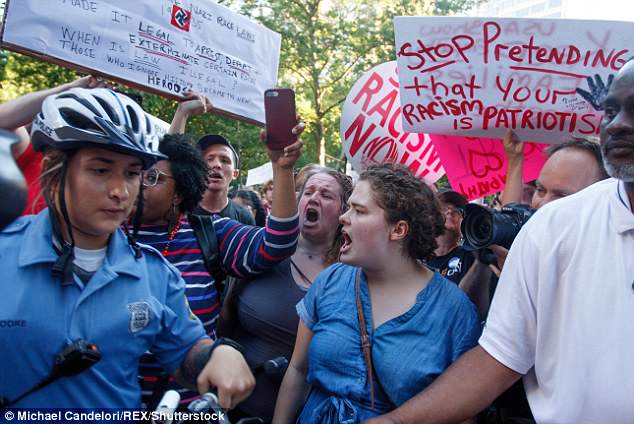 ‘We can’t let people pour in. They’ve gotta go through the process,’ he stated. ‘And maybe it’s politically correct or maybe it’s not – we’ve gotta stop separation of the families.’

Standing his ground, Trump said, ‘But politically correct or not, we have to be a country that needs security, that needs safety, that has to be protected.’

‘And remember, these countries that we give tremendous foreign aid to in many cases, they send these people up, and they’re not sending their finest,’ he claimed. ‘Does that sound familiar? Remember, I made that speech and I was badly criticized….Turned out I was 100 percent right. That’s why I got elected.’

In April Attorney General Jeff Sessions announced a ‘zero tolerance’ policy on illegal migration, pledging to prosecute everyone who tries to cross the border illegally without exception.

That has resulted in thousands of children being separated from their parents because minors can only be held in immigration detention for a short time.

Trump has repeatedly argued that Democrats are ultimately to blame and encouraged them to sit down and hammer out a deal on border security.

But that has led to allegations from both sides of the aisle that Trump is using traumatized children as political pawns.

Bipartisan political groups, religious figures, and thousands of American demonstrators have demanded an immediate end to the policy.