US president says wealthy Middle East countries must foot the bill for US presence in Syria and deploy their own troops. 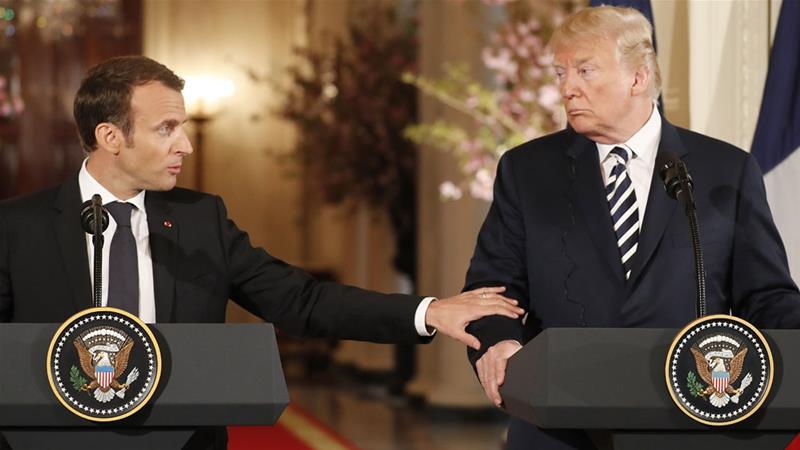 US President Donald Trump has said that some “immensely wealthy” countries in the Middle East have to pay for American protection and deploy their own troops in Syria.

Speaking at a news conference with French President Emmanuel Macron on Tuesday, Trump said these countries “wouldn’t last a week” without US support.

“Countries that are in the area, some of which are immensely wealthy, would not be there except for the United States, and to a lesser extent France,” Trump said.

“They wouldn’t be there except for the United States. They wouldn’t last a week. We are protecting them. They have to now step up and pay for what is happening.”

Trump seemed to backtrack on an earlier decision to withdraw US forces from Syria, when he stressed on Tuesday that it was important not to allow Iran grow its influence in the region.

“As far as Syria is concerned, I would love to get out. I’d love to bring our incredible warriors back home. They’ve done a great job …”

“With that being said, Emmanuel and myself have discussed the fact that we don’t want to give Iran open season, especially since we really control it.”

Saudi Arabia: ‘Qatar has to pay’

In response to Trump’s remarks, Saudi Foreign Minister Adel al-Jubair said Qatar should pay for US presence in Syria.

“Qatar has to pay for US military presence in Syria and send its military forces there, before the US president cancels US protection of Qatar, which hosts a [US] military base on its lands,” al-Jubeir said in a statement carried by the official Saudi Press Agency (SPA) on Thursday.

Al-Jubeir said the “[Qatari] regime would fall there in less than a week” if the US pulls its troops out of Qatar.

There are currently more than 9,000 US soldiers, most of them from the Air Force, and 100 military aircrafts at Al Udeid airbase, which lies about 30km west of Doha.

It is the main air operations centre for the US Central Command, with cargo aircrafts, strategic bombers, and aircraft refuellers.

Earlier in April, Trump said Saudi Arabia had to pay if it wanted US troops to remain in Syria.

“We’ve almost completed the task [of defeating ISIS] and will be making a decision very quickly in coordination with others in the area, as to what we will do,” Trump said at the time.

“Saudi Arabia is very interested in our decision and I said: ‘Well you know, you want us to stay? Maybe you are going to have to pay.'”