Engaging in meetings and over dinner in London recently with British figures observing or involved in the Brexit process brought home that while Australians follow the Brexit drama, we know little of its detail. We enjoy the sport, but try explaining the Irish Backstop in your local pub.

Those Australians who articulate firm views about Brexit tend to be on the conservative/monarchist side of our political spectrum and side with the Leavers. 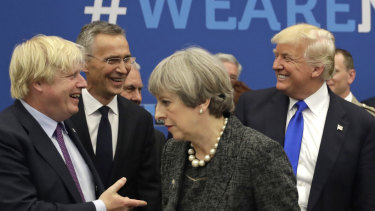 President Donald Trump jokes with Boris Johnson when he was British Foreign Minister in 2017.Credit:AP

First, a breakup of the United Kingdom can’t be good for the West. A no-deal Brexit would prejudice the UK/Irish Good Friday agreement and could revive the Northern Ireland troubles. Even an agreed Brexit could probably lead to another push by the Scots for independence. Bewilderingly, a recent YouGov poll indicated that 63 per cent of the Tories' English membership would prefer that Scotland leave the Union than that Britain remain in the EU.

Second, Brexit proponents argue that Atlantic security falls to NATO – not the EU – and that Britain will be as active as ever in NATO. But security is not that neat. The EU’s founders intended it to prevent wars in Europe The fact that EU foreign and defence ministers and officials meet all the time has security significance.

And it was not because he wanted a change from the Washington weather that, before the referendum, President Obama spent four days in Britain arguing the case against Brexit as prejudicial to Western security interests.

Just last week the British would have been reminded of the European aspects of their security when seeking European involvement in a maritime alliance to protect European shipping interests in the Strait of Hormuz.

In London I heard suggestions being made by senior Brexit advocates that, having left the EU, Britain would play a wider global role benefiting Australia – for example by working with us to counter Chinese aggression. This is drawing a long bow. Deployment of the occasional British vessel in the South China sea or the opening of small missions in the Pacific will be marginally positive rather than significant factors in helping balance Chinese power.

That said, Britain remains an effective, albeit reduced, military power with the finest foreign policy/security apparatus in Europe. Particularly given increased strategic congruence between Russia and China, Western nations with similar security outlooks need to work closely together. A strong Europe is integral to Western security. Europe without Britain is diminished.

In the face of Trump’s poor treatment of his Transatlantic allies, Britain has shown commonsense in differing from Washington on issues such as Iran, Israel/Palestine and climate change. Thus far it has not accepted US arguments on banning Huawei from a 5G network. However, given Britain’s concern that with its retreat from Europe it needs the US all the more, British resolve to hold firm against American pressure cannot be taken for granted on a number of fronts.

These thoughts give rise to consideration of the place of the Anglosphere in Australian policy. Even before the Brexit debate, Canberra occasionally showed signs of regarding the Five Eyes intelligence sharing arrangement (USA, UK, Australia, NZ and Canada) within the Anglosphere as being as important as the wider structure of our foreign relationships which that arrangement is meant to serve.

It would be a pity if in the wake of personal and policy bonding between Johnson and Trump, Australia were to put exaggerated political energy into the Anglosphere at the cost of our dealings with the region.  The Asia-Pacific is facing issues arising from Chinese expansionism and American disregard for the rules-based system which it created. These developments raise challenges of a dimension not seen since the Second World War. That the British Brexiteers wish to revert to days of yore should not encourage us to act similarly.

John McCarthy has served as Australian ambassador to Vietnam, Mexico, Thailand, US, Indonesia, Japan and High Commissioner to India.