How Trump makes the links between politics and his business

Glasgow: President Donald Trump will have a closely watched meeting on Monday with President Vladimir Putin of Russia, just days after the announcement that 12 Russian military intelligence officers had been indicted on charges of hacking Democratic organisations in an effort to affect the 2016 election.

But first, a bit of golf.

Trump was shielded from members of the US news media who travelled with him to Trump Turnberry, the luxury Scottish resort where he is staying — but not from British journalists, who captured protesters on a nearby beach shouting, "No Trump, no KKK, no racist USA" as he teed off on Saturday.

The group chanted across windswept grasslands and a protective buffer of dozens of law enforcement officials, some of them on horseback. According to footage captured by the BBC, the president appeared to wave at the crowd before turning back to his golf game. 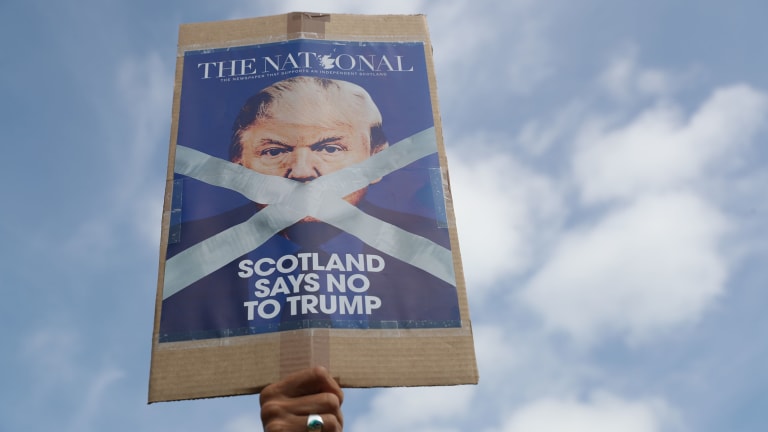 A protester holds up a banner as people gather to protest the visit by US President Donald Trump and first lady Melania Trump, in Turnberry, Scotland, on Saturday July 14.

Thousands protested against his visit on Saturday in the Scottish capital of Edinburgh — where two "Trump Baby" balloons made an appearance. Scottish police confirmed they were searching for a paraglider with a banner reading, "Trump Well Below Par" who had breached a no-fly zone over the resort after the president arrived on Friday night.

Trump has, for the most part, ignored the large rallies against him in the United Kingdom, instead focusing on promoting Turnberry. He described it as "magical" while on the world stage this past week at the NATO summit in Brussels and on a working visit to Britain. 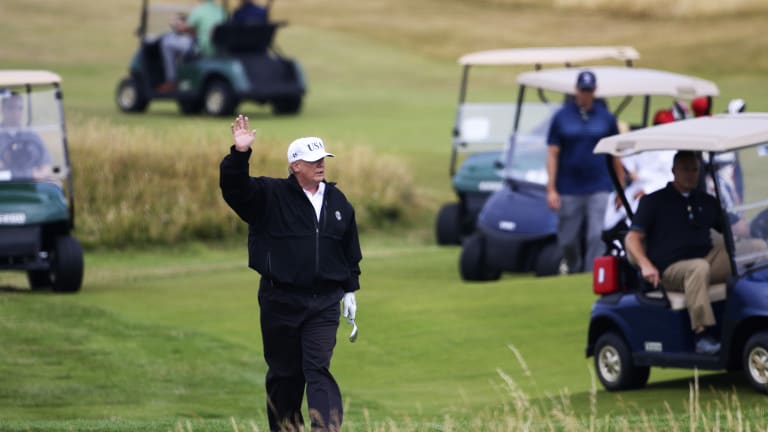 President Donald Trump waves to protesters while playing golf at the loss-making Trump Turnberry in Scotland.

Before arriving in Scotland — the birthplace of his mother, as well as that of Trump's preferred pastime — the president managed repeatedly to plug Turnberry, one of two Scottish resorts that bear his name, as he dealt with some of the most pressing diplomatic problems facing his administration to date.

It is a tactic that has alarmed ethics watchdogs, who say he is using his presidential platform to promote a resort that, according to financial filings, has been a burden on the family business.

While the president has blazed a chaotic streak through Europe this past week, Turnberry has received special recognition amid other Trump-issued sound bites that analysts say have undermined the United States' relationships with close NATO allies.

At a hastily arranged news conference in Brussels, when asked to discuss his message for Britain on its exit from the European Union, Trump said he had none — a thought he would later undermine in stunning fashion in an interview splashed on the cover of the British tabloid The Sun. Then, Trump wove in a reference to Turnberry, on breathtaking bluffs and cliffs on the western coast of Scotland, calling it "magical" and "one of my favourite places".

"I'm going there for two days while I wait for the Monday meeting" with Putin, the president told the news media.

Trump said he would be taking calls and meetings before the planned gathering with Putin in Helsinki. But around the time he hit one of the resort's two golf courses Saturday, his official account began posting on Twitter.

In two tweets, he blamed the Obama administration, not Russia, for the hacking and again suggested that a Democratic "deep state" was afoot.

He also plugged the Turnberry golf course again: "The weather is beautiful," he wrote on Twitter, "and this place is incredible!" 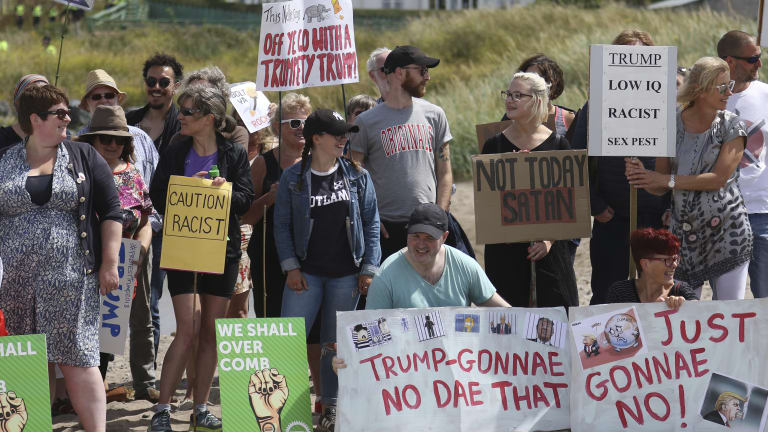 Protesters on a beach near Turnberry golf club, Scotland, on Saturday, July 14.

Ethics experts tend to be cynical about the president's sentimental references to his resort: His arrival at Turnberry marks the 169th day during his presidency that he has visited a property owned, managed or branded by the Trump Organisation. Financial records show the resort has lost money since Trump purchased it in 2014.

"I view this as kind of a forced subsidy of an infomercial for his properties," Norman L. Eisen, chairman of Citizens for Responsibility and Ethics in Washington, said in an interview Friday. "He's attempting to utilise his trip to get beneficial PR."

Before Trump left for Scotland on Friday, he again brought up Turnberry during a news conference in England with Prime Minister Theresa May of Britain.

"I was opening Turnberry the day before Brexit," Trump said, "and all they wanted to talk about was Brexit, and I said, 'I think Brexit would happen,' and it did happen."

Trump, in fact, arrived at Turnberry the day after Britons voted in 2016 to leave the European Union, but he spoke about his resort for 15 minutes before he took questions on Brexit at a news conference. He also expressed scepticism when asked if the referendum would send shock waves through the global markets.

Although Trump has claimed to have spent at least £200 million, about $360 million, on Turnberry to buy and renovate it since 2014 — a figure that has not been verified independently — the course has yet to turn a profit.

In fact, the Turnberry operation has lost tens of millions of pounds since he purchased it, filings in Britain show: about £17 million in 2016, the last year for which such comprehensive records are available. For 2017, Trump's government ethics filing discloses only how much revenue the course generated — $US20.4 million — not whether it had earned a profit.

When reached for comment about Turnberry on Friday, the Trump Organisation described a success story. In an email, Amanda Miller, a spokeswoman, pointed to some of Turnberry's golf lore — including the much-publicised 1977 British Open championship between legendary golfers Tom Watson and Jack Nicklaus.

"Turnberry is an icon in the golf world, and we are incredibly proud of its continued success," Miller wrote. The resort's famed Ailsa golf course, she said, was "home to four Open Championships, including the famous 1977 'Duel in the Sun'."

Miller did not respond to a request for comment about how the company gauged success if records showed it was losing money.

Trump appears to hold a special place in his heart for Turnberry, perhaps because of his love of golf and because his mother, Mary Anne MacLeod Trump, who was born in Tong, a village about 480 kilometres from Turnberry, in the north of Scotland.

"I feel very comfortable here," Donald Trump said to reporters during a 2008 visit to Tong, on the island of Lewis, where he spent about 90 seconds in the modest cottage where his mother was born. "It's interesting when your mother, who was such a terrific woman, comes from a specific location, you tend to like that location. I think I do feel Scottish."