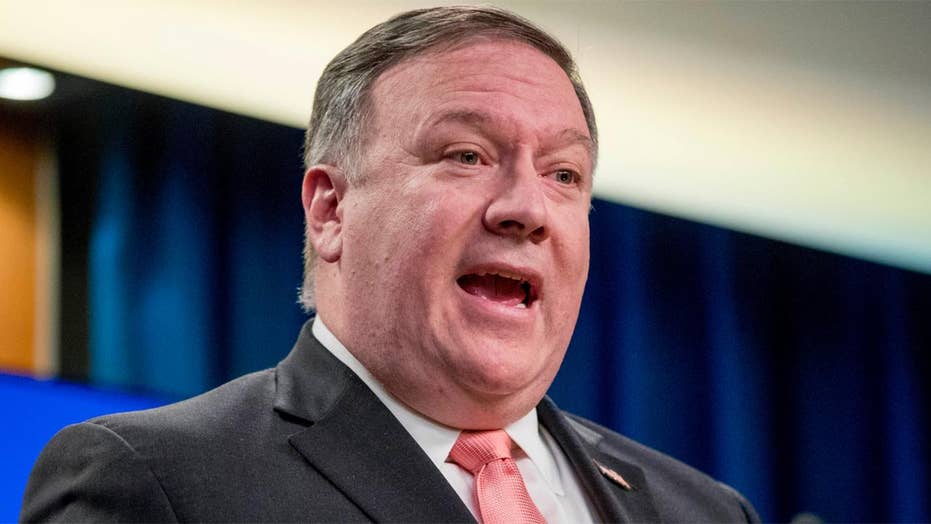 The face-to-face came after Secretary of State Mike Pompeo met with Kim Yong-chol, North Korea's lead negotiator, in the nation’s capital early Friday morning to negotiate terms that could lead to a second nuclear summit between Trump and Pyongyang leader Kim Jong-un.

Pompeo and Kim Yong-chol didn’t shake hands or respond to reporters’ questions but did smile during a photo opportunity ahead of their meeting at a hotel in Northwest Washington.

Kim Yong-chol was expected to have carried a letter from the North Korean dictator to Trump. Last year he presented Trump with an oversized letter in the Oval Office that led to the leaders’ historic June summit.

“They will discuss relations between the two countries and continued progress on North Korea’s final, fully verified denuclearization," White House Press Secretary Sarah Sanders said in a statement shortly before the meeting. 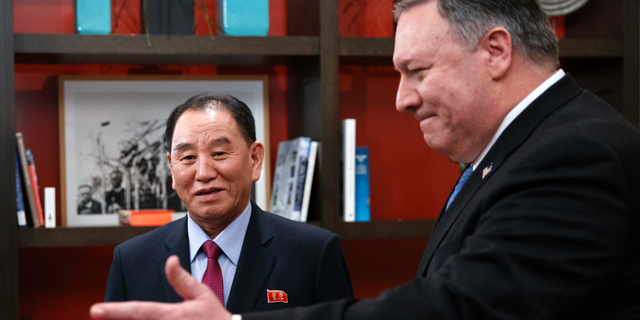 Trump has spoken several times of having a second summit with Kim early this year and has exchanged multiple letters with the North Korean leader despite little tangible progress on a vague denuclearization agreement reached at their first meeting in Singapore last June. Since then, several private analysts have published reports detailing continuing North Korean development of nuclear and missile technology.

At a conference of U.S. diplomats at the State Department on Wednesday, Vice President Mike Pence acknowledged the lack of progress. He called the Trump-Kim dialogue "promising" but stressed that "we still await concrete steps by North Korea to dismantle the nuclear weapons that threaten our people and our allies in the region."

A planned meeting between Pompeo and Kim Yong-chol in New York last November was called off abruptly. U.S. officials said at the time that North Korea had canceled the session.

The talks have stalled over North Korea's refusal to provide a detailed accounting of its nuclear and missile facilities that would be used by inspectors to verify any deal to dismantle them.

The North has demanded that the U.S. end harsh economic penalties and provide security guarantees before the North takes any steps beyond its initial suspension of nuclear and missile tests.

Trump has offered assurances that a second summit would allow the two leaders to seal a deal resolving the nuclear standoff and improving a relationship marked by decades of animosity and mistrust since the Korean War.

Kim Jong-un expressed frustration in an annual New Year's address over the lack of progress in negotiations. But on a visit to Beijing last week, he said North Korea would pursue a second summit "to achieve results that will be welcomed by the international community," according to China's official Xinhua News Agency.

Kim's latest trip to China, his fourth since last year, came as the North's strongest ally has encouraged negotiations with the U.S. while at the same time arguing in favor of immediate easing of sanctions.

The U.S. and North Korea seemed close to war at points during 2017. The North staged a series of weapons tests that brought it closer to its nuclear goal of one day being able to target anywhere on the U.S. mainland. The two sides then took turns insulting each other: Trump called Kim "Little Rocket Man" and North Korea said Trump was a "dotard."

Kim abruptly turned to diplomacy with Seoul and Washington last year, possibly fearing economic harm from the penalties imposed over the weapons tests.

Still, even after the Singapore summit, the first between U.S. and North Korean leaders, there has been little real progress in nuclear disarmament.

Independent analysts are highly skeptical that North Korea will easily abandon a nuclear arsenal constructed in the face of deep poverty and probably seen by Kim as his only guarantee of his government's survival.

POMPEO PERSONALLY COURTED BY MCCONNELL TO RUN FOR SENATE, OR KEEP OPTION OPEN IF 'THINGS GET BAD'

Separately, a North Korean diplomat arrived in Sweden on Friday for an unscheduled visit leading some to speculate it might be the spot for a second summit.

It is possible that U.S. special envoy for North Korea Stephen Biegun would join the meeting later, The Associated Press, citing an anonymous source, reported.

Fox News' Gregg Re and The Associated Press contrbuted to this report.