Donald Trump fired back Monday at Taylor Swift for weighing in on Tennessee’s hotly contested U.S. Senate race, saying the country-pop crossover star ‘doesn’t know anything’ about the Republican she attacked on Sunday.

The suddenly sassy president didn’t know about Swift’s unprecedented dip into politics, but he told DailyMail.com outside the White House that he found her music a bit less listenable because she’s opposing Rep. Marsha Blackburn, a Republican who he’s endorsed.

Trump, 72, aid that Blackburn ‘is doing a very good job in Tennessee. She’s leading now substantially, which is good. She’s a tremendous woman.’

‘I’m sure Taylor Swift has nothing, or doesn’t know anything about her. And let’s say that I like Taylor’s music about 25 per cent less now, okay?’ the president grinned.

Swift, 28, broke with years of silence about her political views on Sunday as she attacked Blackburn in her adopted home state. The chart-topping blonde is originally from Pennsylvania 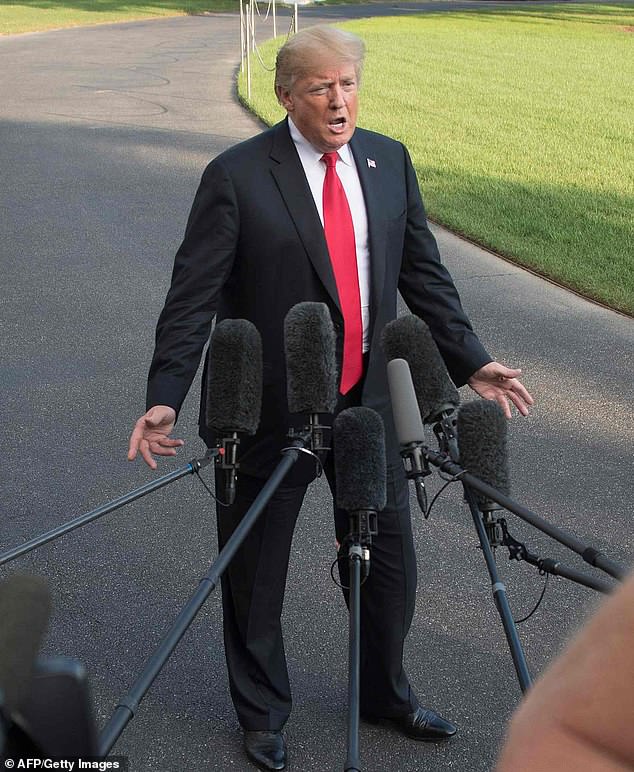 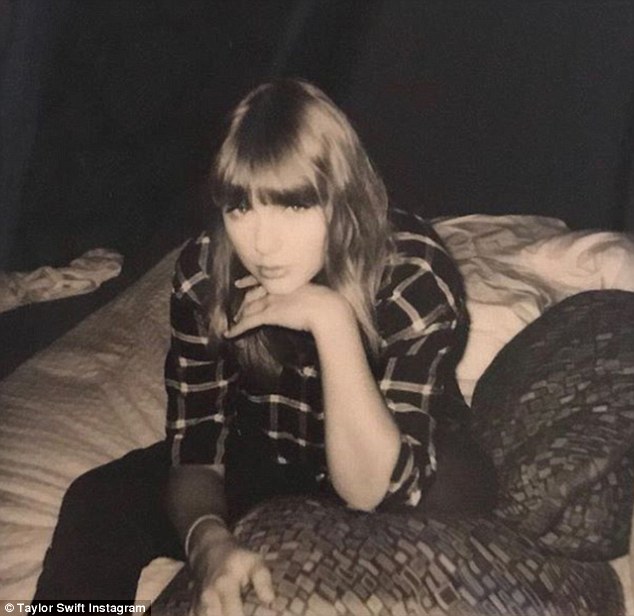 Swift discussed her political views for the first time ever on Instagram on Sunday, attacking Blackburn in her adopted state of Tennessee – she’s originallly from Pennsylvania – and backing Democrat Phil Bredesen instead 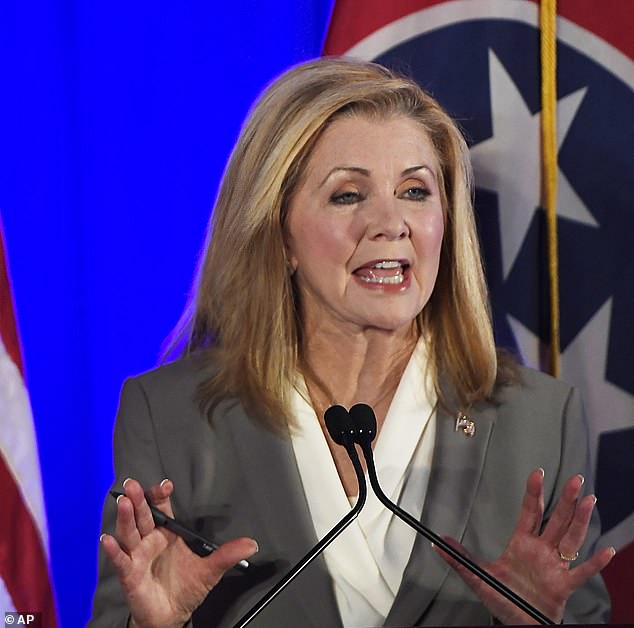 The pop superstar came out swinging as she opposed Senate candidate Marsha Blackburn over her voting record on women’s and gay rights.

Swift said she refuses to vote for someone ‘who will not be willing to fight for dignity for ALL Americans, no matter their skin color, gender or who they love.’

She took issue with Blackburn voting against gay marriage, supporting business owners who refuse service to gay couples, voting against equal pay laws, and against a bill which aimed to protect women from domestic violence.

‘Her voting record in Congress appalls and terrifies me,’ she wrote, adding: ‘These are not MY Tennessee values.’

Swift is registered to vote in Tennessee but is originally from Pennsylvania. She moved to the VOlunteer State at age 10. 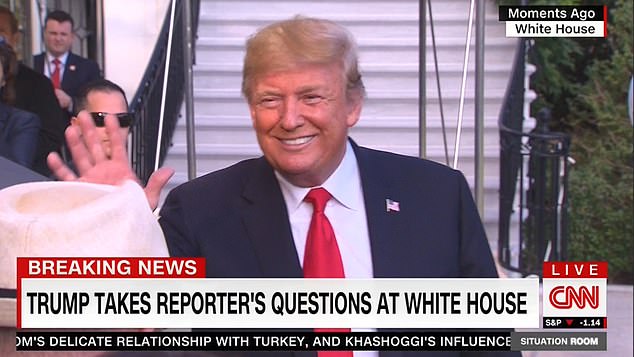 Instead of Blackburn, Swift endorsed former Tennessee Governor Phil Bredesen for Senate, and incumbent Jim Cooper for a House seat. Both are Democrats.

The Reputation hitmaker also used her platform to urge young people to register to vote and make their voices heard in November.

‘So many intelligent, thoughtful, self-possessed people have turned 18 in the past two years and now have the right and privilege to make their vote count,’ she wrote.

‘But first you need to register, which is quick and easy to do. October 9th is the LAST DAY to register to vote in the state of TN. Go to vote.org and you can find all the info. Happy Voting!’ 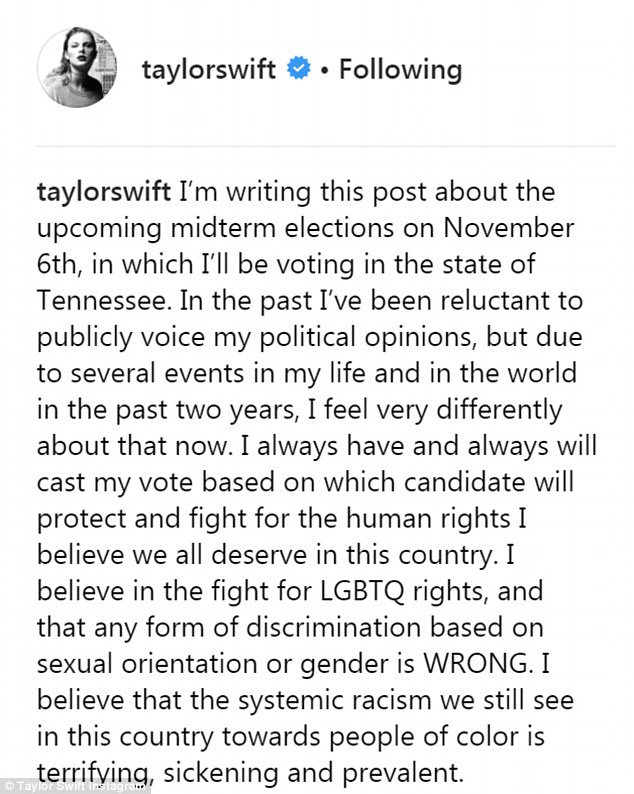 The pop superstar, who is registered to vote in Tennessee, explained that the events of the past two years have persuaded her that she should speak out and share her views 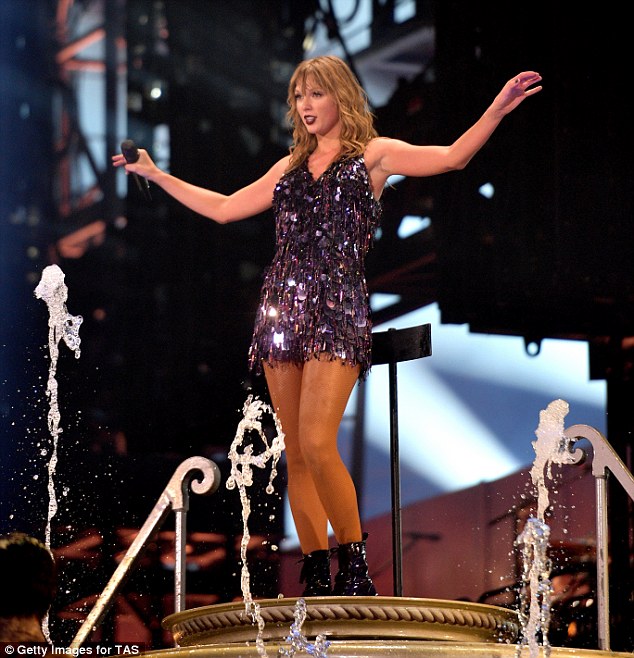 ‘I always have and always will cast my vote based on which candidate will protect and fight for the human rights I believe we all deserve in this country,’ Swift, 26, said Sunday 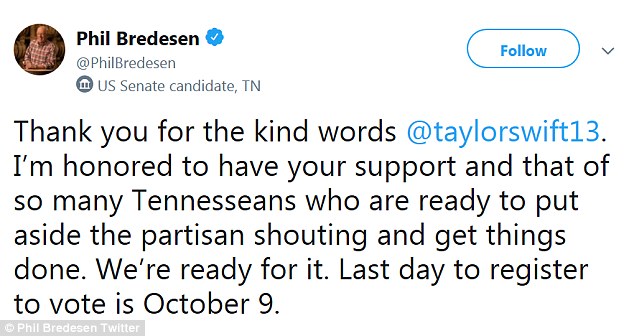 Former governor Bredeson tweeted his thanks to the singer for her endorsement, saying ‘I’m honored to have your support’ 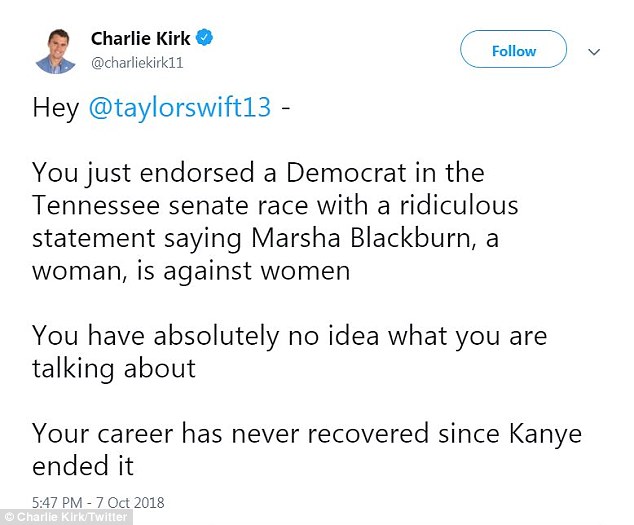 Conservative organizer Charlie Kirk lashed out at Swift, saying: ‘You have absolutely no idea what you are talking about. Your career has never recovered since Kanye ended it’

She added a smiley face emjoi and a rainbow symbol.

Swift wrapped up the North American leg of her Reputation Tour with a concert in Arlington, Texas, on Saturday night.

She’s set to open the American Music Awards in Los Angeles on Wednesday before heading off Down Under as she takes her Reputation Tour to Australia and New Zealand and then on to Japan.

Bredesentweeted his thanks to the singer for her endorsement, saying: ‘I’m honored to have your support.’

According to a recent Fox News poll, Blackburn leads Bredesen by a 48-43 margin. 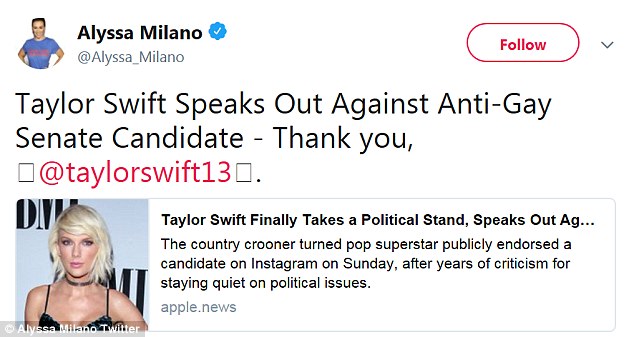 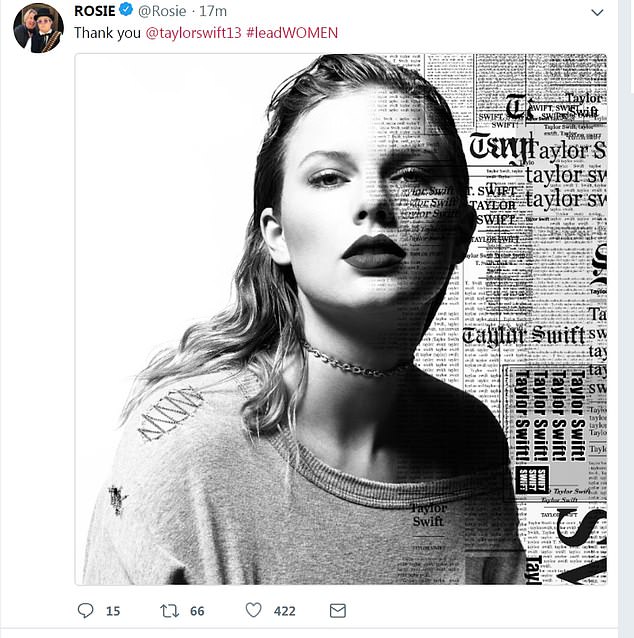 But Charlie Kirk, a conservative organizer and president of the Turning Point Project, lashed out in a tweet, saying: ‘You have absolutely no idea what you are talking about. Your career has never recovered since Kanye ended it.’

Swift didn’t acknowledge Bredesen’s recent endorsement of Supreme Court Justice Brett Kavanaugh, but said people may never find a candidate or party with whom they agree completely on every issue.

Swift usually stays quiet about her beliefs, but she announced on Instagram in March that she had donated to the Parkland school shooting’s March For Our Lives campaign, just ahead of their Washington, D.C. march.

Swift shared the logo for the campaign in her post and captioned it: ‘No one should have to go to school in fear of gun violence. Or to a nightclub. Or to a concert. Or to a movie theater. Or to their place of worship.’