‘This is a massive crime against humanity’: Trump says we ‘can’t let’ the situation in Ukraine continue and slams ‘paper tiger’ NATO for its inaction

Former President Donald Trump slammed his former comrade Vladimir Putin for the growing death toll in Ukraine – calling it a ‘massive crime against humanity’ – and blasted NATO for its lack of action during a GOP donor event Saturday.

Trump spoke to Republican National Committee donors in Louisiana during the Spring Retreat in New Orleans, where he covered a wide variety of topics, including the escalating crisis in Ukraine.

Trump also went after NATO, calling it a ‘paper tiger’ and said the US cannot just stand by while Ukraine is invaded, according to Washington Post reporter Josh Dawsey, who obtained a recording of Trump’s remarks. 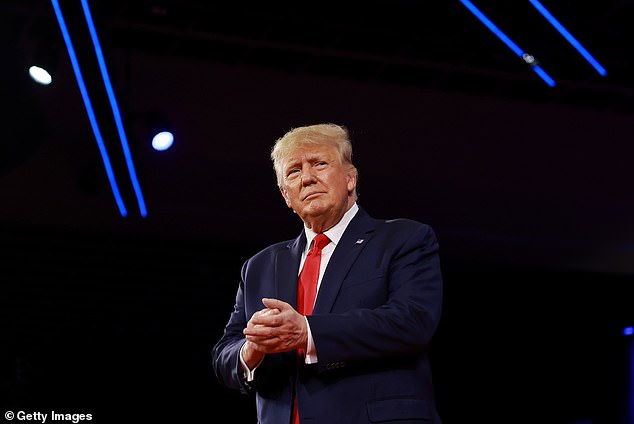 Trump went after NATO, calling it a ‘paper tiger’ and told GOP donors that the US can not just stand by while Ukraine is invaded 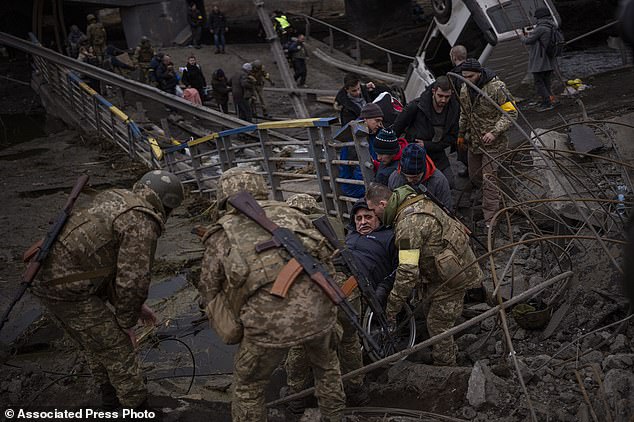 Ukrainian soldiers help a man on a wheelchair as people try to flee crossing the Irpin river in the outskirts of Kyiv, Ukraine, Saturday, March 5, 2022

Trump’s comments come as Putin’s forces have besieged Ukraine and sparked fears that NATO would be drawn into the fighting. Ukraine President Ukrainian President Volodymy Zelenzky has repeatedly begged NATO to enforce a no-fly zone over his country to help thwart Russian air superiority.

However, the US and its allies have resisted, fearing it could put NATO forces in direct conflict with Russia.

During his presidency, Trump had reportedly said multiple times that he wanted to pull the United States out of NATO, a move that aides scrambled to counter.

Speaking of the situation in Ukraine, Trump told donors that the US should put Chinese flags on America’s F-22s and then ‘bomb the s***’ out of Russia, leading to conflict between the nations while ‘we sit back and watch.’

He also shared his thoughts on North Korea dictator Kim Jong Un, saying that ‘he’s absolutely the leader of that country,’ and expressed he was impressed at how Jong Un’s  advisers were ‘sitting at attention’ when he talked and ‘cowered’ when he spoke to them.

Trump said one general stood up so fast when spoken to and joked:’ ‘I want my people to act like that.’ 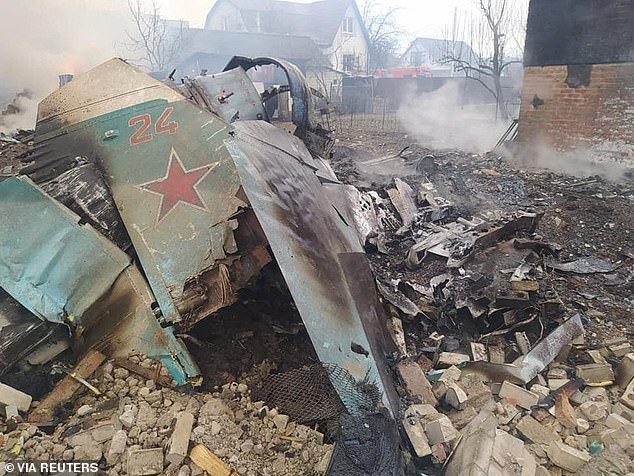 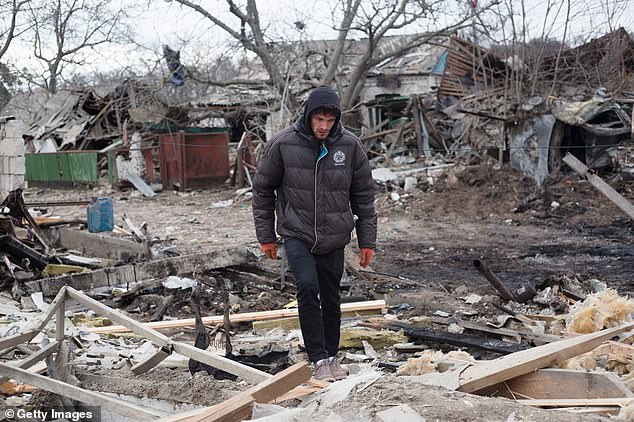 Local resident walks through the rubble as a result of shelling in Markhalivka, March 5, 2022 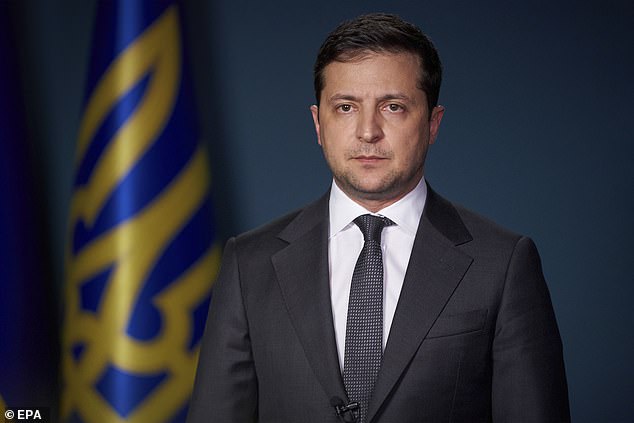 Trump previously voiced his support for Ukraine at last week’s CPAC event, where he said he was ‘praying for the proud people of Ukraine’ and expressed admiration for Zelensky, calling him a ‘brave man.’ (Zelensky pictured)

Trump previously voiced his support for Ukraine at last week’s CPAC event, where he said he was ‘praying for the proud people of Ukraine’ and expressed admiration for Zelensky, calling him a ‘brave man.’

‘God bless them, they are indeed brave, as everyone understand this horrific disaster would never have happened if our election was not rigged and if I was president,’ he said.

The ex-president knocked Biden for being ‘grossly incompetent’ and poked fun at Biden’s threat of sanctions, saying Putin’s been getting sanctioned for the past 25 years.

‘The world hasn’t been this chaotic since World War II,’ Trump said.

On Saturday, Putin escalated his rhetoric in his confrontation with the West, saying that sanctions against Russia are tantamount to a declaration of war and threatening to treat any country that declares a no-fly zone over Ukraine as part of the conflict.

The threats came as Moscow’s brutal assault on Ukraine saw a mass civilian evacuation from the city of Mariupol derailed when Russian forces ignored a promised humanitarian ceasefire and continued shelling the southern city.

Russian troops continued to bombard encircled cities and the number of Ukrainians forced from their country grew to 1.4 million. The UN says more than 350 civilians have been killed since Russia’s invasion last week.

On Saturday, Zelensky repeated his plea for NATO to establish a no-fly zone in a meeting with the US Congress — but the idea faces strong bipartisan opposition in America, and NATO leaders have rejected it, pointing out that it would draw the alliance into direct military confrontations with nuclear-armed Russia.

A no-fly zone could only be enforced by shooting down Russian aircraft, and Putin on Saturday made clear that he would view such a move as joining the conflict.

‘We’ll instantly view them as participants in a military conflict,’ the Russian leader told a group of female employees of Russian airlines, according to Russian state media. ‘We’ll view any movement in this direction as involvement in an armed conflict by the country from whose territory threats to our military service members are posed.’

At the same meeting, Putin issued bellicose threats in response to the punishing economic sanctions leveled against his country by the US and Europe.

‘These sanctions that are being imposed are like the declaration of war,’ said Putin. ‘A lot of what is happening now, of what we now see and what we face is undoubtedly a means of fighting against Russia.’