White House says Trump will decide on Russia sanctions ‘in the near future’, contradicting comments by Nikki Haley. 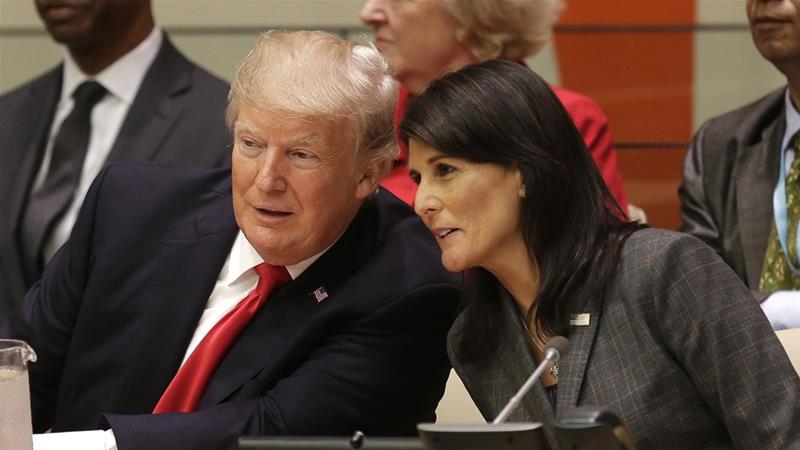 US President Donald Trump has paused a new round of sanctions that were set to be imposed against Russia over its support for the Syrian government’s chemical weapons programme.

White House Press Secretary Sarah Huckabee Sanders said on Monday that a decision on fresh sanctions had not been made yet, contradicting an earlier announcement by US ambassador to the UN Nikki Haley who said new sanctions would likely be announced early this week.

“You will see that Russian sanctions will be coming down,” Haley told CBS news programme Face the Nation on Sunday.

“[The sanctions] will go directly to any sort of companies that were dealing with equipment related to Assad and chemical weapons use,” she added.

But Sanders said the White House was still “considering additional sanctions”, with a decision to be made “in the near future”.

She added later in the day that “the president has been clear that he’s going to be tough on Russia, but at the same time he’d still like to have a good relationship with them”.

The proposed sanctions would have been part of a range of punitive measures imposed by the Trump administration in the wake of an alleged chemical weapons attack in Eastern Ghouta, Syria that killed dozens on April 7.

Early on Saturday, the United States, the UK and France launched missile attacks on facilities believed to be used to research, develop and store chemical weapons inside Syria.

Russian President Vladimir Putin denounced the attacks as “an act of aggression” that would only worsen the humanitarian crisis in Syria.

Russia said in the UN last Friday that its experts found no trace of “toxic substance use” during their investigation in Douma, where the alleged attack took place.

For its part, France said it has evidence Syrian government forces were responsible.

On Monday, Russia said that a team of chemical experts from the Organisation for Prohibition of Chemical Weapons (OPCW) would inspect the site of the suspected attack on Wednesday.

The announcement came as Russia rejected US accusations of tampering with evidence in an investigation. Moscow also rejected an allegation by the British delegation of the OPWC that the investigators had been blocked from entering the site, saying the delay was due to Saturday’s missile attacks.

Ryabkov said that Russia’s lower house of parliament is considering legislation that would give the Kremlin the power to restrict US imports, RIA also said.