Trump threatens WTO, saying the U.S. will respond if it isn’t ‘treating us ‘properly’ – after White House aides who drafted trade bill fail to realize they called it the FART Act

President Donald Trump threatened the World Trade Organization in comments Monday – although he said his administration wasn’t planning anything ‘now.’

His comments came after the leak of draft legislation that would have the U.S. get around WTO trading rules.

‘And I hope they change their ways,’ Trump said.

‘They have been treating us very badly for many, many years and that’s why we were at a big disadvantage with the WTO.’

Then, the president added without explanation: ‘We’re not planning anything now, but if they aren’t treating us properly we will be doing something.’ 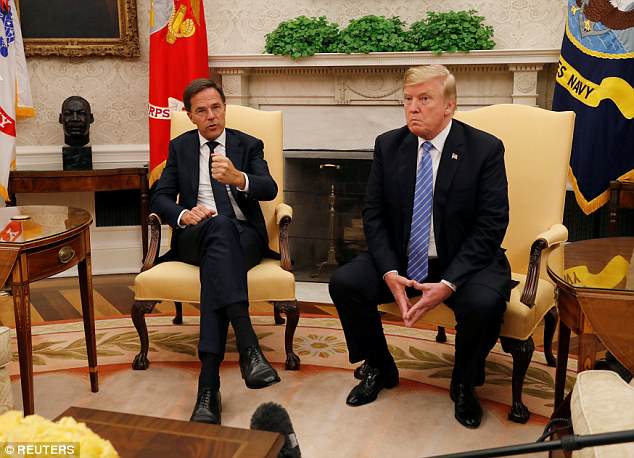 Trump’s statements don’t square with the U.S. record in disputes taken to the WTO. According to a 2017 study by the libertarian CATO Institute, the U.S. prevailed in 91 per cent of cases it brought before the body.  On cases where it was responding to suits by other countries, the U.S. lost 89 per cent – about the same.

Trump spoke after White House aides who he ordered to draw up a bill to have the nation get around WTO trading rules came up with an odious response: the FART Act.

But aides apparently neglected to acronym-check the title – even though attaching cutesy bill titles that spell out the key message of the proposed law has become a staple of legislative practice in the Capitol.

Trump personally ordered the bill be drafted, according to the report.

It didn’t take long for critics to let rip criticism of the draft legislation – and among those mocking the bill was former White House Communications Director Anthony Scaramucci. 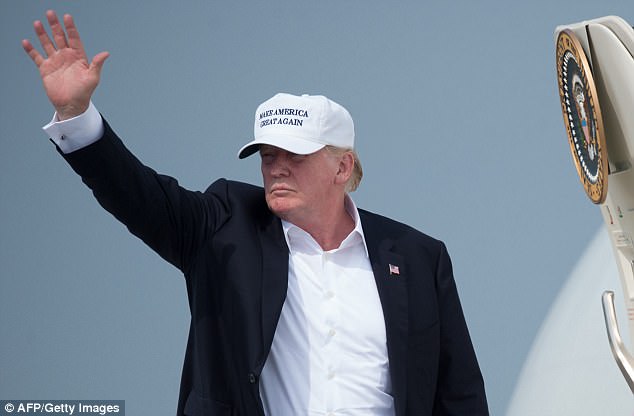 ‘WTO has its flaws, but the ‘United States Fair and Reciprocal Tariff Act,’ aka the U.S. FART Act, stinks. American consumers pay for tariffs. Time to switch tactics,’ Scaramucci tweeted.

The U.S. helped establish the WTO in 1995 as a way to mediate trade disputes and head off tit-for-tat trade wars of the kind that are currently enveloping the U.S., Canada, Mexico, China, and the European Union.

Unless they acted deliberately, the aides who crafted the Trump bill missed one of the key habits of those tasked with putting legislative ideas on paper. In 2017, acronym bill titles to emerge from the Capitol included the GROW Act, the EGO act (on oil paintings), and the CARE Act, according to just one count.

Axios reported on Friday that Trump wanted to leave the WTO, a story dismissed by U.S. Treasury Secretary Steve Mnuchin as ‘wrong’ and ‘an exaggeration’.

WHAT’S IN A NAME? Critics pointed to the acronym of a leaked White House trade bill

The website followed up on Sunday by publishing what it said was a draft bill, the ‘United States Fair and Reciprocal Tariff Act’, immediately drawing ridicule for legislation that would be known by its acronym, the FART Act.

The act would allow Trump to ignore the WTO’s ‘most favored nation’ principle, which stops countries trading on different terms with different trading partners unless they have a formal trade agreement, Axios said.

It would also allow ‘reciprocal tariffs’, so Trump could impose U.S. tariffs on particular goods equal to the tariff charged on U.S. exports of those goods by another country.

The draft bill published by Axios did not mention the WTO, but its report said the law would allow the United States to disregard tariff limits agreed at the WTO since 1995. 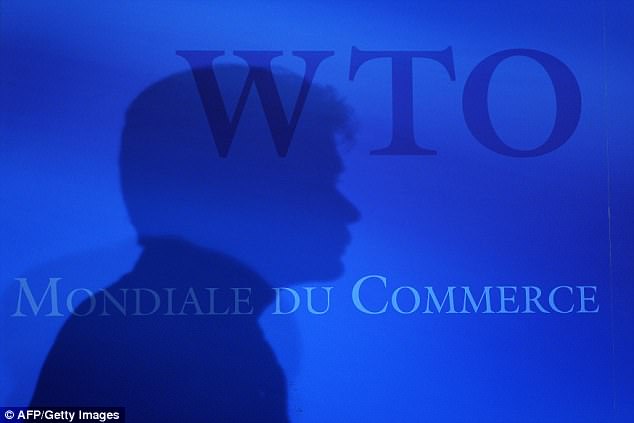 A man is seen in silhouette at the World Trade Organization (WTO) headquarters after crucial trade talks collapsed on July 29, 2008, in Geneva 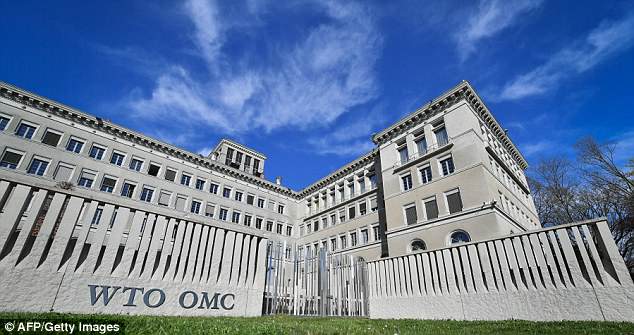 The World Trade Organization (WTO) headquarters are seen in Geneva on April 12, 2018 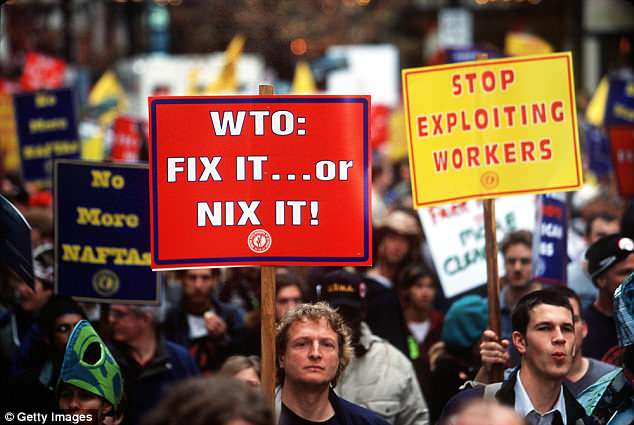 Protesters hold signs while standing a few blocks away from the World Trade Organization (WTO), November 29, 1999

Axios quoted a source familiar with the bill as saying the bill was ‘insane’ and Congress would never consent to it. Trump was briefed on the draft in late May, Axios said, and most officials thought it was unrealistic or unworkable, apart from Trump’s trade adviser Peter Navarro.

White House spokeswoman Lindsay Walters told Axios that the administration was not preparing to roll out such legislation.

Trump has caused a crisis in the WTO by blocking the appointment of new trade judges, threatening to destroy the system of binding dispute settlement. But many diplomats say quitting the WTO would not be in the U.S. interest, and the WTO has said it has never had any indication of Trump intending to leave. 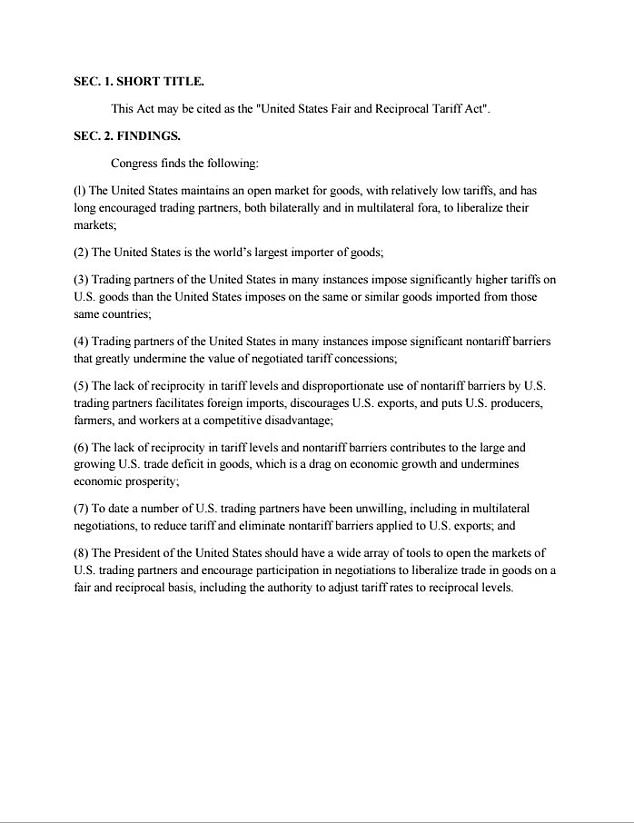 The bill would allow the U.S. to abandon tariff rules established by the World Trade Organization, which mitigates disputes

U.S. officials in Geneva, home of the WTO, did not immediately respond to a request for comment on Monday.

Simon Lester, associate director of the Trade Policy Center at the Cato Institute, wrote on the International Economic Law and Policy Blog that ‘I’m not taking this too seriously’.

If the goal was to get lower tariffs for U.S. exports, Trump could do that by negotiating trade agreements, he said. (Reporting by Tom Miles Editing by Peter Graff)