By Alexandra Alper and Steve Holland

WASHINGTON (Reuters) – U.S. President Donald Trump welcomed Australia’s prime minister on Friday for only the second state visit of his administration, signaling the close bond between the two allies as Washington takes on Beijing and Tehran.

Trump and Scott Morrison are expected to discuss security and trade, as China’s increasing assertiveness, especially in the energy-rich South China Sea, has raised concerns within the region and the United States.

The leaders are also set to release a plan on Friday aimed at securing the supply of rare earth minerals, as concerns grow that China, the world’s largest processor and producer of the minerals, could cut off shipments of the prized commodities.

Days before the visit, a sign draped across the Australian Embassy in Washington proclaimed “100 years of mateship” between the two countries. On Friday, Trump feted Morrison’s arrival at the White House’s South Lawn with a 19-gun salute and U.S. Marine Band performances of each nation’s national anthems.

“It’s highly symbolic of where the relationship sits at the moment,” said Patrick Buchan, a fellow at the Center for Strategic and International Studies, noting that Morrison’s state visit was second only to French President Emmanuel Macron’s last year.

“Australia played a very smart game with Trump,” he added, noting the country had avoiding directly criticizing him, unlike some European counterparts.

Trump got off to a smooth start with Morrison in May, congratulating him on his surprise election victory in a tweet noting there were “no greater friends” than the United States and Australia. 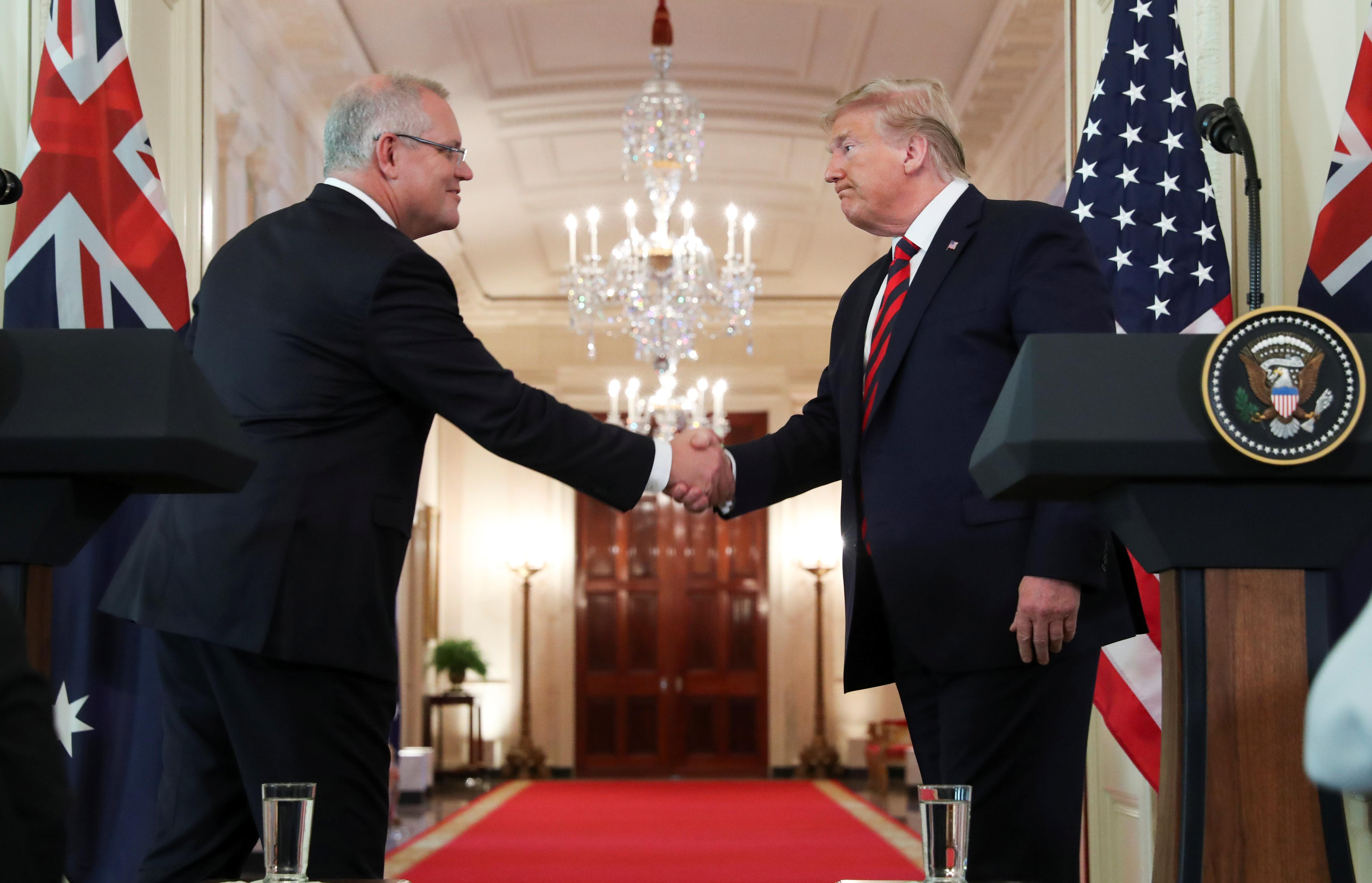 The two also met on the sidelines of the G20 in June, cementing warm ties that Trump did not enjoy with Morrison’s predecessor, Malcolm Turnbull. Trump berated Turnbull in February 2017 over a bilateral refugee agreement before abruptly ending their telephone conversation.

Australia also agreed last month to join a coalition to protect oil tankers and cargo ships from threats posed by Iran in the Strait of Hormuz after a series of attacks there that Washington has blamed on Tehran.

Australia has also banned China’s Huawei Technologies Co Ltd HWT.UL, the world’s top provider of telecoms equipment, from its 5G network, something the Trump administration has struggled to persuade other allies to do. The United States says Huawei’s ties to Beijing make the network equipment it sells to telecoms firms a security risk.

Australian intelligence concluded China was responsible for a cyberattack on Australia’s parliament and its three largest political parties, Reuters reported on Monday.

Following an arrival ceremony, bilateral meetings, and a joint news conference, Vice President Mike Pence and Secretary of State Mike Pompeo will host a luncheon for Morrison to be followed by a state dinner at the White House.

During a visit to Sydney last month by Pompeo and U.S. Defense Secretary Mark Esper, the United States and Australia pledged to strengthen opposition to Chinese activities in the Pacific.

China has unnerved the region and angered the United States by installing military equipment and other facilities on artificial islands it has made in the disputed South China Sea. 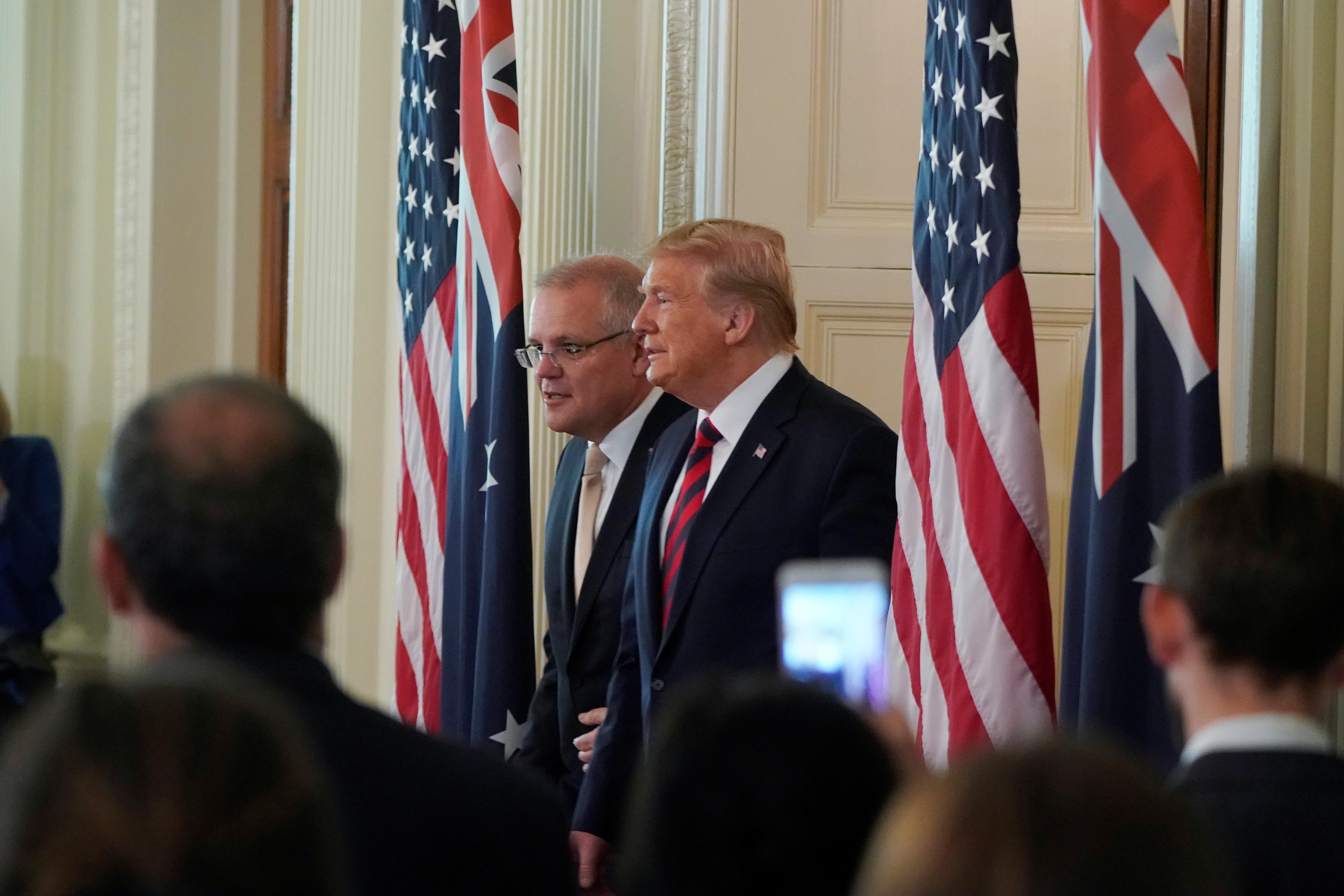 The United States and its Western allies also worry that China is using foreign aid to secure greater influence over small Pacific countries that control vast swath of resource-rich ocean.

Australia, traditionally the major power in the South Pacific, has promised up to A$3 billion ($2 billion) in grants and loans to counter what Washington describes as China’s “payday loan diplomacy.”

But Morrison has pressed Trump to end his trade war with China, which has roiled markets and hammered global growth.