There are plenty of questions regarding Miami Dolphins quarterback Tua Tagovailoa's concussion sustained during "Thursday Night Football." When he'll be able to play again is one of them.

Dolphins head coach Mike McDaniel told reporters Friday that Tagovailoa has no timetable to return as he remains in the NFL concussion protocol following his injury during "Thursday Night Football," while the quarterback released his first statement since the fateful hit.

Tagovailoa thanked fans for their prayers and support, while declining to discuss the circumstances of a situation that has revived concerns about the integrity of the NFL's concussion policies.

Appreciate all the support! 🙏🏾 pic.twitter.com/jWBYyvbbwg

Per McDaniel, Tagovailoa had a headache Thursday night and Friday morning, but was otherwise alert and responsive. He was taken to the University of Cincinnati hospital following the play that left him on the ground with a clear fencing response, but was discharged that night and allowed to travel back to Miami with the team.

Tagovailoa reportedly underwent an MRI on Friday, in addition to CT scans and X-rays taken while at the hospital. The results figure to bring more clarity to his return, though McDaniel said he's not worrying much about timetables right now:

"I'm not even really thinking about timetables or anything regarding him as a player right now. It's all about Tua the person. What gets lost in all this is there's human relationships, that these aren't just "create-a-player." These are people we mutually invest in and somebody I've grown very, very close to. So when it comes to head injuries and concussions, with things that severe, the only thing I'm worried about is the person first.

"We're just worried about him getting healthy, getting all the testing done that needs to get done, us working with him so we can feel good about where that injury's at, and then we'll cross the bridge in terms of timetables of however long. I really haven't even thought about that at this point."

Tagovailoa being out a significant amount of time would mean more time under center for backup quarterback Teddy Bridgewater, who was 14-of-23 for 193 yards, a touchdown and an interception in relief of Tagovailoa on Thursday. Seventh-round rookie Skylar Thompson figures to take over backup duties in Bridgewater's place.

McDaniel was emotionally at times speaking about an injury that left many in the football world worried about long-term health effects for Tagovailoa, but he also defended the team's handling of a previous hit that left many wondering if Tagovailoa should have been playing at all on Friday. 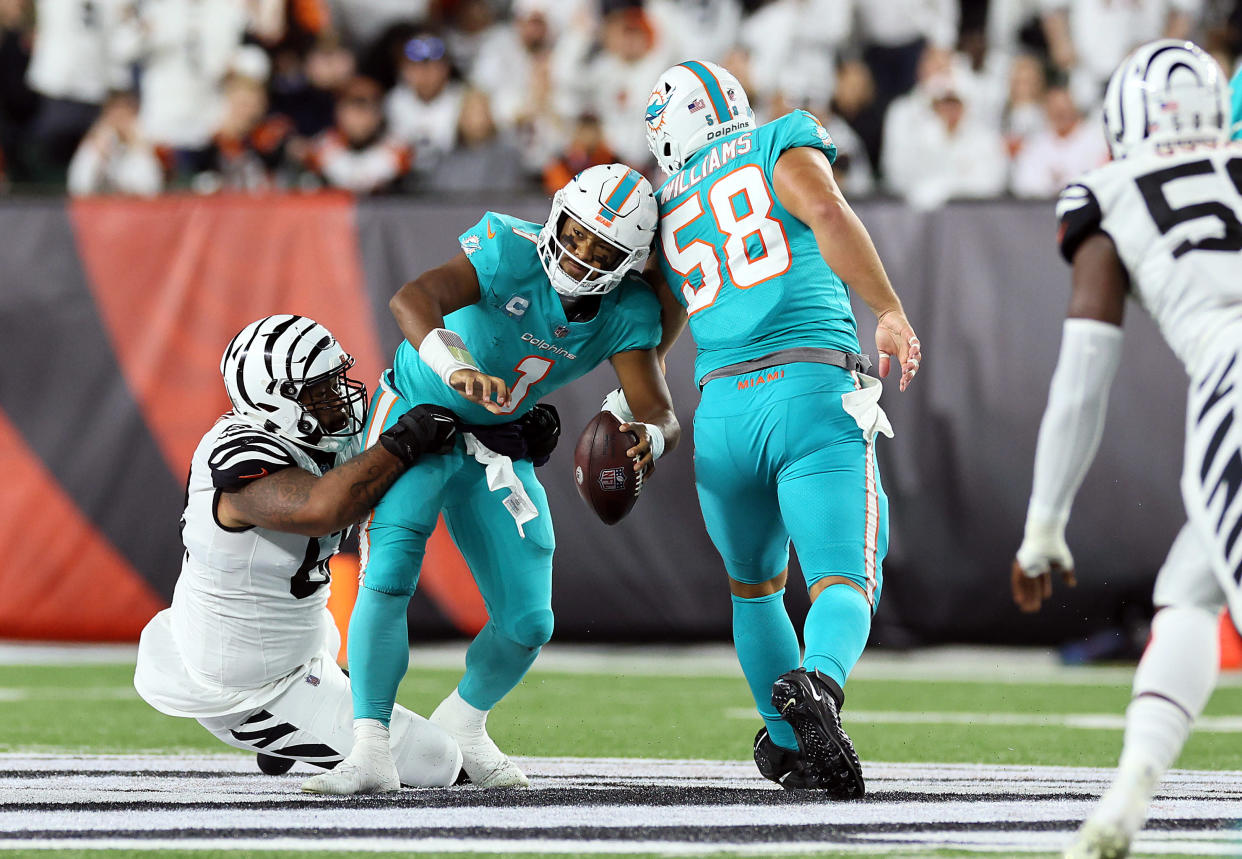 While he said he "appreciates" the concern about Tagovailoa's head, McDaniel rejected any notion that the team had improperly handled the hit he received in last week's game against the Buffalo Bills, saying he had "100 percent conviction" in the team's process.

The Bills hit was similar to the one Tagovailoa received against the Bengals. Both had him slung back with his head hitting the turf. The aftermath was much different though, as Tagovailoa was able to walk off the field, while visibly stumbling, and soon allowed to return to the game, a 21-19 Dolphins upset win.

The NFLPA announced an investigation into the Dolphins' handling of the concussion protocol the same day, but the Dolphins have insisted Tagovailoa showed no reasons for concern about his return. He was ruled questionable for Thursday night's game, but with a back injury.

McDaniel again said all protocols were followed with Tagovailoa last week and insisted that Tagovailoa had seemed like himself throughout the week:

"I'm in steady communication with this guy, day in, day out. We're talking about high-level football conversations, about progressions and defenses and recalling stuff from two weeks previous and him having to reiterate a 15-word play call. There was no medical indication from all resources there was anything regarding the head.

"If there would have been anything lingering with his head, I wouldn't have been able to live with myself if I prematurely put someone out there and put them in harm's way."

Tagovailoa is reportedly still dealing with the back injury and an ankle injury as well, but those are obviously lower priority.