TV and radio host James Whale has revealed that his wife has died months after she was told she had Stage 4 lung cancer.

The 67-year-old took to Twitter to confirm the news, revealing that his wife of 48 years, Melinda Maxted, had died following her terminal cancer diagnosis late last year.

The couple – who are parents to James and Peter and have two teenage grandchildren called Oscar and Ella – only discovered the full extent of the disease on January 3.

Whale wrote: ‘A couple of hours ago part of my world ended Melinda Jane Whale, I love you babe moved on. Rest in light and love.’

The TV personality, who starred on Celebrity Big Brother in 2016, subsequently thanked his friends and family from supporting him through his heartbreak. 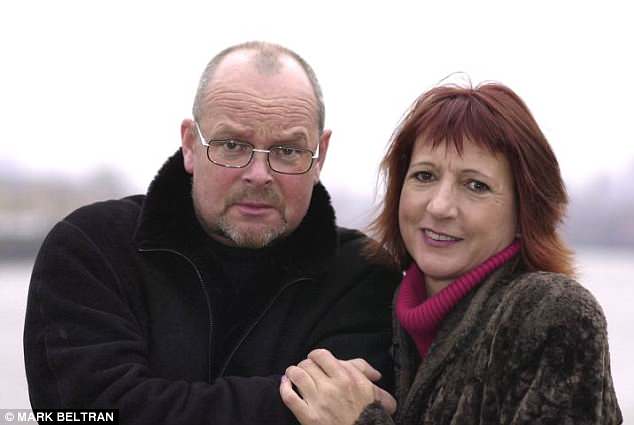 The 67-year-old took to Twitter to confirm the news, revealing that his wife of 48 years, Melinda Maxted, had died following her terminal cancer diagnosis late last year

However, in following messages he admitted to struggling to come to terms with the situation.

He confessed on the micro-blogging platform: ‘Woke up from what I thought was a nightmare!!! What do I do now? Thanks for all your thoughts and messages they help a lot can’t believe it.’

The veteran broadcaster took his dogs for a walk in the sunshine on Sunday, but he later confessed he wasn’t in the right frame of mind to return to work at talkRADIO.

He said: ‘Back home strange day, tomorrow the hell begins I’ll talk a little on @talkRADIO tomorrow but I’ll not do the show just yet. Thanks all.’

His latest message, posted earlier this morning, read: ‘Beginning of the first week with out Melinda. She just told me to put the washing on and get up here we go…’

James first revealed his wife had been diagnosed with stage four lung cancer in February.

He moved his radio studio to his bungalow in Headcorn, Kent, so he could work while caring for Melinda. 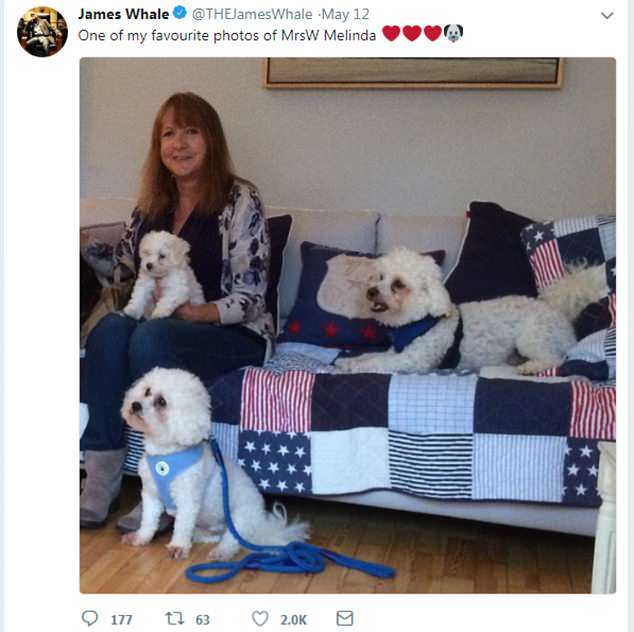 Whale posted this photograph of his wife to Twitter along with their dogs, captioning it as one of his favourites

He shared: ‘Melinda has stage four lung cancer, it is terminal. She is not expected to live very long, it may be weeks or months. She is having treatment, and I cannot give up that last glimmer of hope.

‘But the doctors say I have to face facts. She is dying. The thought of losing her is so painful, it is difficult to even contemplate.’

Non-smoking, vegetarian Melinda, 68, had been working hard as a businesswoman and as James’s social media advisor and PA before the shock news. 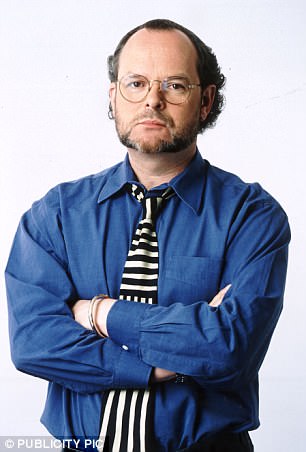 In an interview with MailOnline in February, Melinda revealed how she went to her GP in September after feeling unwell and suffering with a cough.

She said: ‘I thought it was just a virus but the doctor found an infection in my lower, left lung and ear. I was prescribed antibiotics and sent home.’

When they didn’t work, Melinda went back and was prescribed another course, which also didn’t work, before being sent for a chest X-ray.

She said: ‘I was getting more and more tired. At one point I really doubted myself. I thought, ‘This is in your head, Melinda.’ I thought it was the winter blues.

‘But when I saw the radiographer’s face I immediately knew something was wrong. The next day, I was told I needed further tests.

‘By the time I was told it was cancer in December, I already knew. Don’t ask me how, but I did. I have stage four lung cancer with secondary cancer scattered here, there and everywhere.

‘It’s in my bones, my spine and my lymph glands. It’s gone ping, all over the place.

‘It was such a huge shock.

‘You’re talking three months from perfect health to now, when I sleep almost 24 hours a day. It certainly crept up on me.’