More misery for the social media sector as Twitter stock plunges 16% on the back of lower user numbers, a day after Facebook’s value plummeted by $119bn in the worst day ever for a company on Wall Street

Metrics released Friday revealed Twitter Inc had a revenue of $711million in the second quarter, but the company’s stock took a hit because it lost one million monthly active users between the first and second quarter.

It caps a miserable week for the social media sector; Facebook had the worst day in stock market history on Thursday as shares plunged 19 percent, wiping $119billion off the company’s value.

It was the social media giant’s worst day in six years as a public company, with CEO Mark Zuckerberg seeing $12billion wiped off his fortune in less than 24 hours. 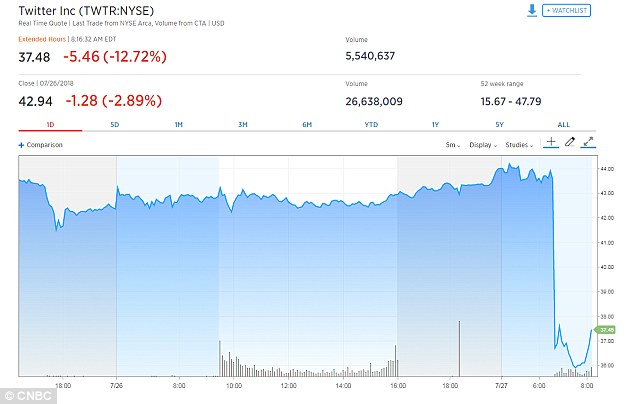 Twitter announced earlier this month that it has been deleting around one million bot and spam accounts each day since May, with the total expected to reach 90 million by the end of July.

However, recent reports from the company have raised concerns that its efforts to purge problematic accounts may lead to a noticeable slump in growth.

Between the end of the first and second quarters, monthly active users on Twitter fell by one million to 335 million total, whereas analysts had predicted an increase of one million.

All of the one million accounts lost were from the US.

Twitter has forecasted a third-quarter decline in the mid-single-digit millions, suggesting a sequential decline to around 330 million users.

That’s 10 million fewer than what analysts were expecting in the third quarter, according to Reuters.

As a result of the less-than-ideal figures, Twitter shares fell 16 percent in pre-market trading. 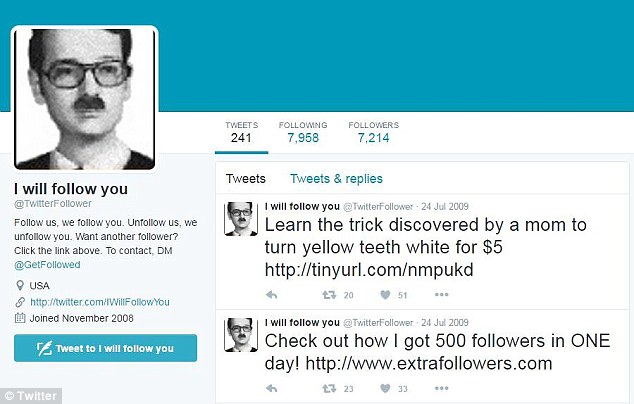 A shareholder letter accompanying Friday’s report stated: ‘We are making active decisions to prioritize health initiatives over near-term product improvements that may drive more usage of Twitter as a daily utility.’

CEO Jack Dorsey also released a statement highlighting the fact that daily users grew 11 percent compared to a year ago, saying the figure showed that addressing ‘problem behaviors’ was helping to turn the service into a daily utility.

The report did not reveal the number of daily users.

Twitter had said earlier in July that deleting phony accounts would not have much impact on monthly users because the purge targeted ones that are inactive.

The number of inactive accounts has been an important metric for investors and advertisers concerned that users are buying phony accounts to boost their following.

The total revenue of $711million reported Friday is primarily from advertising, up 24 percent from last year and 15 percent higher than the average analyst estimate of $696million.

The majority of the revenue came from advertising, with Twitter reporting that generated $30million in ad revenue from the FIFA World Cup during the two-week tournament.

Second-quarter profit was $100million, with a $42million boost due to a tax accounting move. Twitter turned its first-ever profit in the fourth quarter of 2017 and has been profitable ever since, but warned last quarter revenue growth would slow this year and costs would rise. 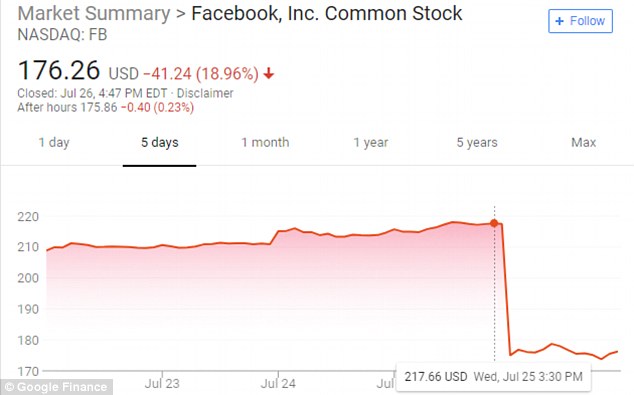 Facebook had the worst day in stock market history Thursday as shares plunged 19 percent, wiping $119billion off the company’s value

Facebook has also had a tough week in the stock market, suffering its worst day in six years as a public company, as well as the biggest one-day wipeout in US stock market history.

Founder Zuckerberg’s net worth fell to $74billion, dropping him to the fifth richest person in the world.

The company’s shares plunged $41.24 to $176.26 after it failed to meet Wall Street’s estimates for user growth and quarterly revenue.

By 9.40am EST on Friday, 10 minutes after the New York Stock Exchange opened, Facebook’s shares clocked in at $176.42 – rising just half a percent from the previous day as the company looks to recover from Thursday’s spectacular losses.

Investors hammered shares in the social media giant after it reported slower revenue growth in the second quarter after markets closed on Wednesday.

The results fell short of Wall Street expectations as the company continues to grapple with privacy issues.

Subsequently, in overnight trading, the company’s shares plunged 20 percent, a figure that was then reflected when markets opened Thursday morning.

Facebook’s second-quarter results were the first sign that new European privacy laws and a string of privacy scandals involving Cambridge Analytica and other app developers are hitting the company’s business.

In midday trading Thursday, the company’s market value (the number of outstanding shares multiplied by the value of a single stock), fell by more than $122billion.