An England fan has been arrested after reportedly grabbing a policeman’s pistol on a train headed for Volgograd.

The man, described only as British, was disarmed by officers, thrown off the train and detained at Yelets station en route from Moscow.

Another ‘drunk’ passenger was chucked off and taken to hospital after punching a window. 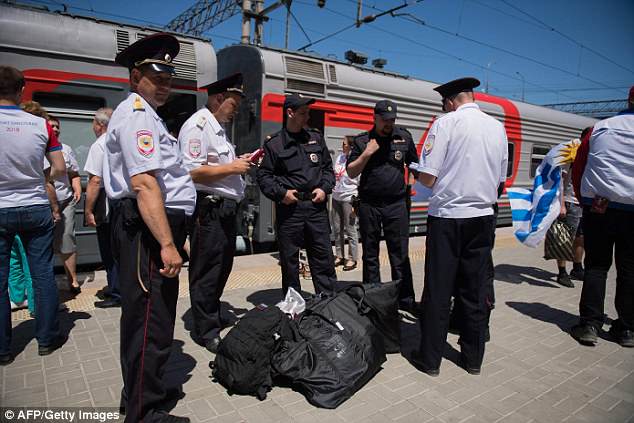 He suffered lacerations on his hand and received stitches at Yelets central hospital, but he was discharged earlier today.

Yelets is in Lipetsk region some 370 miles north of Volgograd.

England football fans are making a flying visit to Volgograd for tonight’s World Cup opener against Tunisia – with hordes of supporters only going for the day.

Many Three Lions supporters are arriving into the Russian city this afternoon at the last-minute before the match – and planning to leave straight afterwards.

Some fans arrived in Moscow on Sunday morning and took a day to travel 1,000km on a train south to Volgograd, laid on for free for those with a match ticket.

But only 2,000 fans are expected to go to the match, which would be the country’s lowest attendance at a World Cup tie. Most fans have stayed at home over fears of President Vladimir Putin’s regime’s heavy-handed policing, hooliganism and racism.

Those that have gone are making a whistle-stop tour because they don’t want to stay in Russia. 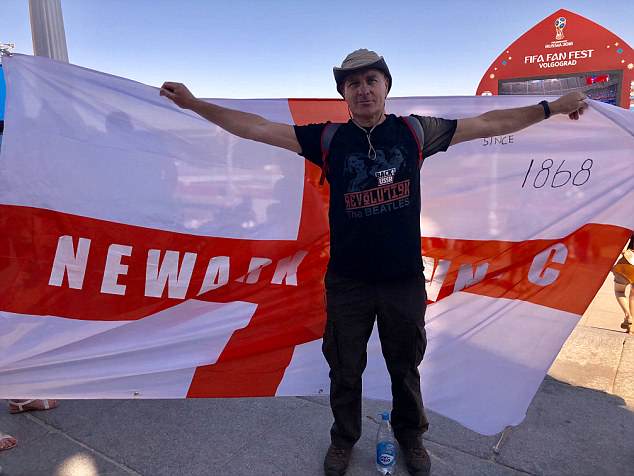 Joe Bass (pictured) paid a few thousands pounds for his trip to Volgograd. He joked: ‘But I don’t want my wife to know’ 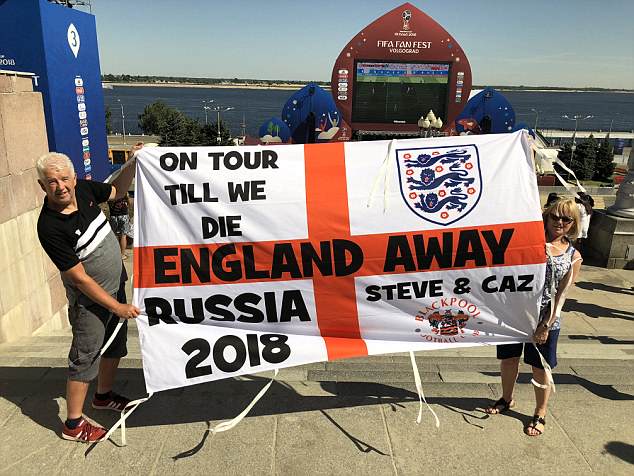 Postman Steve Hodkinson and his wife Carol, from Blackpool, unfurled a giant England flag in the fan zone 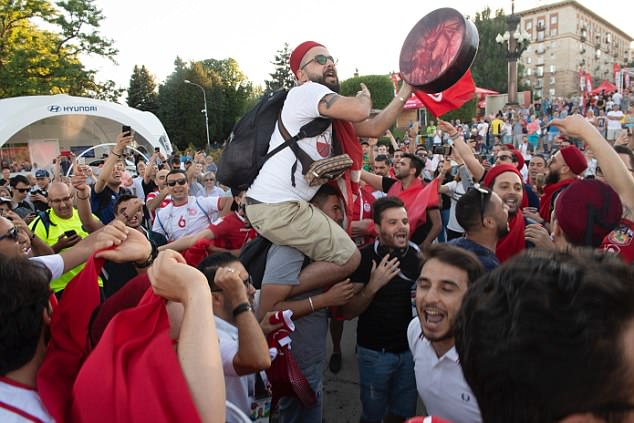 Some fans arrived in Moscow on Sunday morning and took a day to travel 1,000km on a train south to Volgograd, laid on for free for those with a match ticket

Among those making the brief trip is Georgios Pilakoutas, 25, a financial analyst from London who said he would be in Volgograd for less than a day after a gruelling 23 hour train journey from Moscow which arrived at breakfast time.

He will see the match and then take the same train back from Volgograd at 3am Tuesday.

On arriving at Russia’s capital he will fly back to London immediately. He said: ‘The train journey was great.

It was full of fans from England and Tunisia and Russians. ‘They were serving beer and everyone was having a good time talking about football. We were told there wouldn’t be any beer.

‘So we were happy to be able to get a drink.’

The train was organised by Russia football officials and was free of charge for fans with tickets who had to pre-register online.

Laurence Ashcroft, 23, from Preston, was another day tripper who arrived from Kazan and St Petersburg. 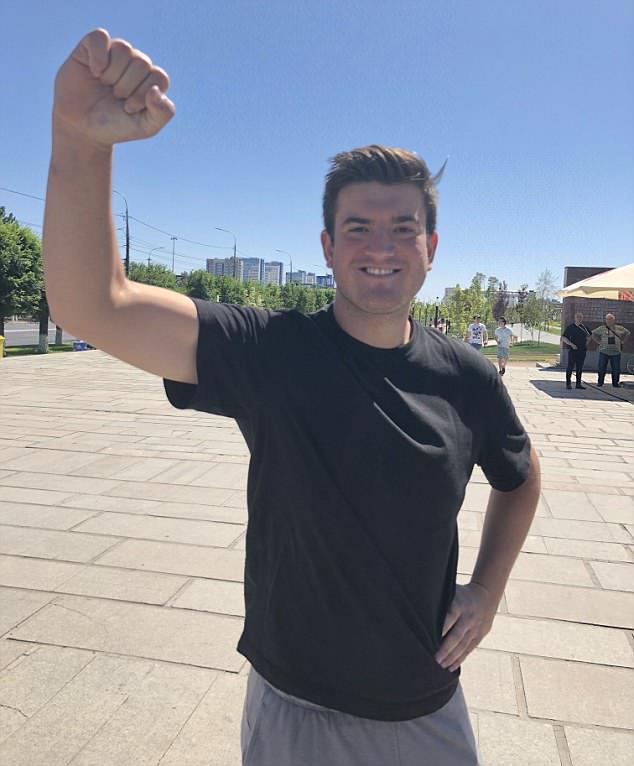 Laurence Ashcroft, 23, from Preston, took a 24-hour train ride to Volgograd. He set off on his journey from Kazan and St Petersburg 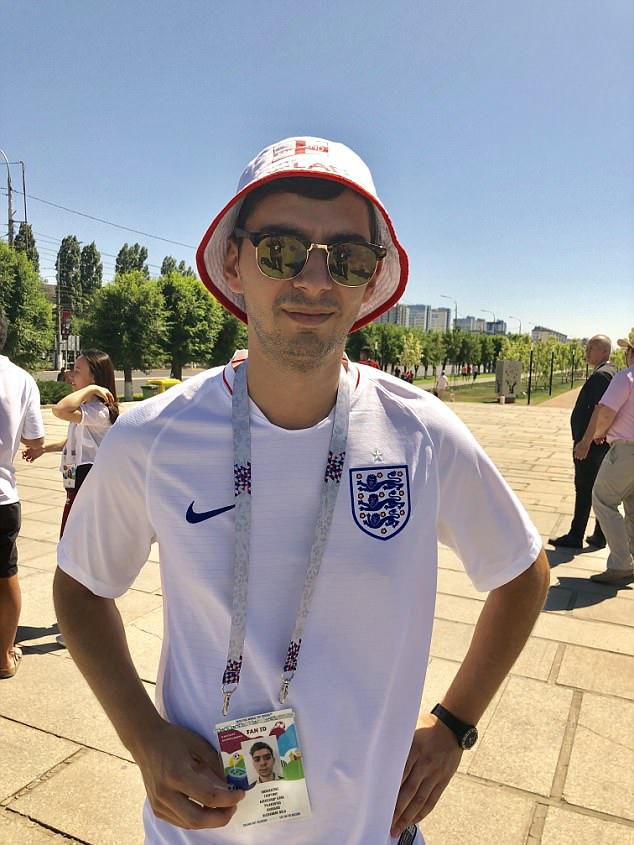 Georgios Pilakoutas, 25, a financial analyst from London, will be in Volgograd for less than a day after a gruelling 23 hour train journey from Moscow

The England fan, who was travelling alone, joined up with fans from Australia as he couldn’t find any fellow England supporters at first.

He said: ‘The train seemed to take forever as it seemed to stop a lot. It took 24 hours. But I’m not tired. I’m just excited to be seeing England.’

Asked how much the trip cost fan Joe Bass joked ‘At least a few thousand pounds. But I don’t want my wife to know.

I’ve already had to pay for a holiday for her to enable me to come here.’ Sam Antrobus, 26, of Sheffield who arrived in Moscow at breakfast time and is flying back to Britain on Tuesday morning, said: ‘It’s great to be here.

It isn’t too much trouble travelling this far to watch England. ‘It would be fantastic to see us win. Maybe 3-0 and a hat-trick for Harry Kane will do.’

Despite the excitement from fans, only around 2,000 will be at the 45,000-capacity Volgograd Arena tonight.

In previous campaigns in South Africa and Brazil, England have been followed by at least five times that – with around 10,000 supporters in attendance.

Most who were heading to Russia were flying in today on chartered jets on official package tours and jetting straight back to Britain after the final whistle tonight.

Tickets are still available for group matches and the lack of interest has been exposed by empty seats in some stadia in the first batch of group games.

In Volgograd, officials have built a huge fan zone close to an amphitheatre on the shores of the Volga river and installed a giant screen to show matches.

In temperatures of around 30C, fans from both England and Tunisia mingled happily in the fan zone today without any hint of trouble.

Each fan entering the area was individually filmed and had their bags searched.

Among those was England fan Chris Farrelly of Birmingham who admitted: ‘I was a bit nervous at first about coming here because of everything that has been said about the hooligans and all the political tension and I am leaving the day after the game.

‘There are not that many England fans here which is unusual. In fact because there are so few when you walk around you recognise each other.

‘But the atmosphere couldn’t be more different to what I expected. The Russians have been great with us and all smiles.

‘They are very friendly. It is great being here and there are no problems at all.’

Lawyer James Dickenson, a Newcastle fan, added: ‘We knew about what happened to the Skripalsin Salisburyand had read about threats from hooligans and the racism, but actually it is a really nice place to be.’ 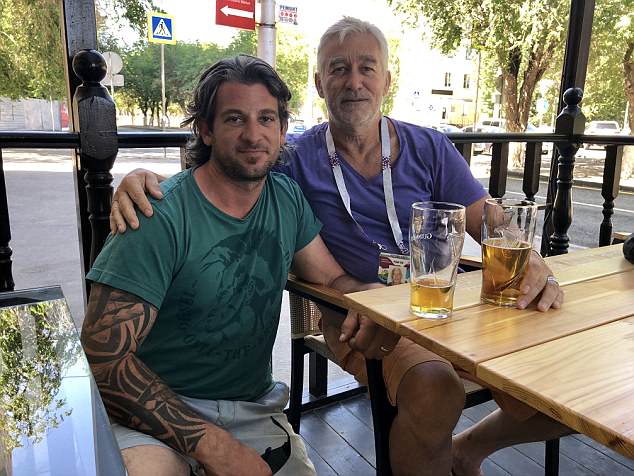 Financial consultant Dan Howell, of Birmingham, wearing an England shirt, said he and his friends had spent between £1,500 and £2,000 for flights, hotels and tickets for tonight’s match, but would not be staying on for a holiday in Russia.

‘There is no trouble here from anybody. People have been very friendly and welcoming.’

One England fan travelled nearly 9,000 miles from his home in Melbourne to be at tonight’s match.

Adam Collins, 37, joined his father Tony, 67, of Ingatestone, Essex, in Volgograd and both said they understood why other fans had been put off from flying in.

Mr Collins senior, a West Ham fan, said: ‘Racism is a terrible thing and even though we have spent all this money and Adam has come so far from his home, we would support any referee who ends a match because of racist chanting.

‘It has to be stamped out once and for all. We can’t let racists and football hooligans win and they have in some way because there are so few England fans here.

‘You would normally see the bars full of England supporters and most are great people. You do get the bad ones, but the majority are football lovers and it is a shame that they have been put off.

‘I was never going to be put off by anything. I am only here for the football as I was to see England at the last World Cup in Brazil.

‘There were greater numbers of England fans there than there are here.’

Adam, a roofer, added: ‘I flew here for 23 hours through Abu Dhabi and Moscow, but I don’t have any jet lag and I think its probably because my adrenalin is pumping over seeing England.

‘It has cost me about £5,000 all in, but it is worth every penny to see England play and tobe with my family here.

‘I just hope the England team can be bold, have heart and be attacking at this World Cup. We have got as good a chance as anybody else.’

Postman Steve Hodkinson and his wife Carol, from Blackpool, unfurled a giant flag of St George in the fan zone and welcomed lines of Russians who wanted their picture taken with it.

Mr Hodkinson, 56, said: ‘The three thousand pounds it has cost for us to be here is money well spent. I would never let any hooligans or political problems hold me back.

‘It is all about having a passion for following your country’s football team and nothing else. But it is always wonderful when people from the host country want to shake your hand and be your friend. That’s what people should be hearing about.

‘Carol and I have had no problems at all, although I am surprised at how few England fans there are here.’

Mike Turner, 27, of Whitby, Yorkshire, added: ‘How wonderful it is to be able to walk around without broken glass on the pavement and without idiot fans singing about RAF bombers killing German pilots.

‘This is a historic city as regards World War Two and it would have been outrageous if these imbeciles had been allowed to come here. I don’t know if they got frightened or got banned. But good riddance to them. It has to be about the players at this World Cup.’

A black England fan told today of how he feared vile monkey chants and racism would ruin his World Cup experience.

Munya Kamwaza, 54, from London, said he was worried before he left for Russia to follow his team.

When his plane from London arrived at Moscow, immigration officers, he said, ‘nearly tore my passport to shreds because they thought a black person with a British passport had to be a fake.’

They were wrong and had to allow the IT consultant and father-of-three access to the World Cup.

‘My inquisition took much longer than anybody else. I was a bit surprised as it was racism on the streets that I was worried about. ‘ 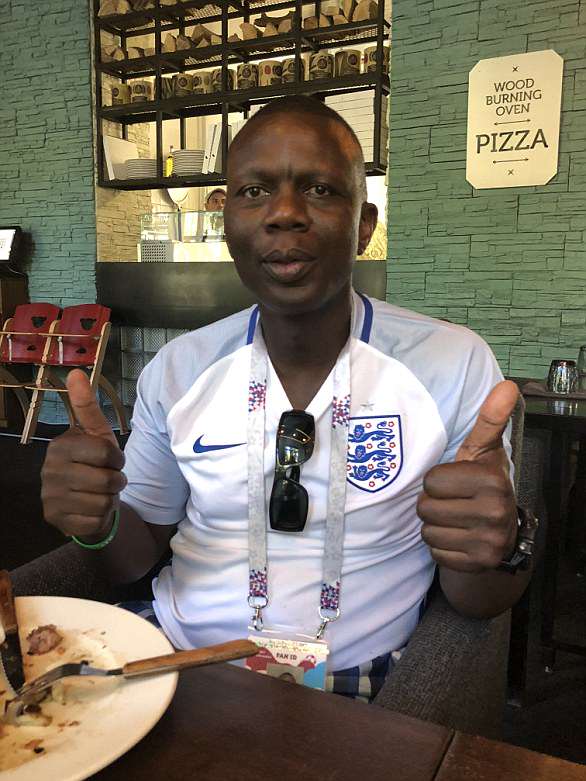 Munya Kamwaza, 54, from London, said he was worried before he left for Russia to follow his team about monkey chants and racism he would experience there

Mr Kamwaza, of Hampton, Middlesex, who has lived in Britain for more than 20 years after emigrating from Zimbabwe, said he was concerned about how he would be greeted as he followed England through the World Cup around Russia.

‘I am a member of the England Football Supporters Association and I’ve got tickets up to the final. I’m here to stay and I hope the team do the same. I did have second thoughts about coming here as I had read about Russian supporters and monkey chanting.

‘If I experience it, it will be unfortunate and I am apprehensive. But I believe in England’s values of fair play and our country’s morals. I am an England supporter like any other, an equal and our fans are great with me and treat me no different.

‘My suitcase is packed with my England shirts and other items supporting the team.’

He has spent £6,000 on his trip and has also followed his country in Brazil and Euro 2016. Some of England’s team have expressed concerns about racist chants and Spurs player Danny Rose asked his family not to travel to Russia.

He added: ‘ I was sorry to hear that Danny Rose had been worried about racism against his family and stopped them from coming. That is sad as they may not get to see him play at the World Cup again. It would have been great for his parents.

‘But I have found the Russian people very friendly. The volunteers are fantastic. I hope I have a good trip here. I’ll be at all England games. I think we’ll win 2-0 tonight … come on England!’