An investigation has found there were breaches of face mask legislation at a function attended by 22 staff from a Surrey hospital after which two junior doctors tested positive for coronavirus.

Those affected were Royal Surrey County Hospital junior doctors, according to the Health Service Journal which first reported the incident on October 2 at a venue in Guildford. 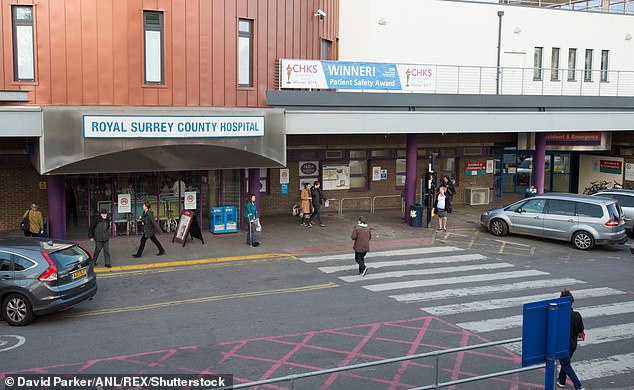 Two junior doctors from Royal Surrey County Hospital in Guildford, pictured, tested positive for Covid-19 after attending an event with 22 medics in the town where social distancing guidelines were breached 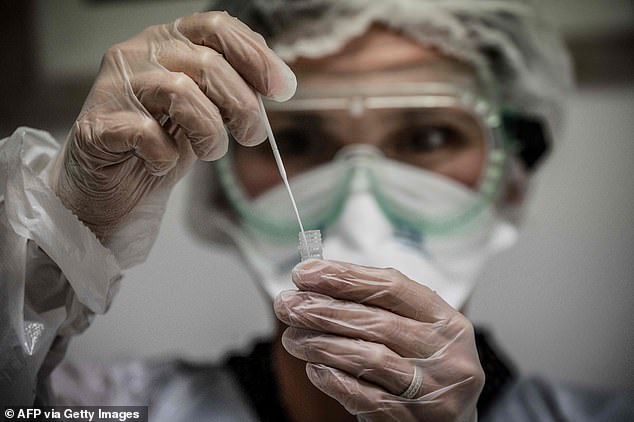 Public Health England described the event as ‘an outbreak’. The hospital confirmed neither of the medics returned to work after their positive test results

Dr Mark Evans, Deputy Medical Director, said: ‘Protecting our patients is our priority and we are committed to ensuring that all of our staff follow government guidance. This incident took place outside of work and has been reported appropriately, and there was no disruption to our services for patients.’

Surrey Police carried out a retrospective investigation to find out whether any Covid-19 legislation was breached. It established that although ‘efforts were made to socialise within the rule of six ‘, there were ‘some breaches of legislation relating to the not wearing of face masks when moving around the within the venue’.

A Surrey Police spokesperson said: ‘Surrey Police was notified retrospectively and based on the evidence, the proportionate response has been to warn the individuals in relation to their conduct.

‘This is a difficult time for all, but there is an expectation that those who work to protect others do not put themselves or others at risk.’

They added: ‘We encourage all members of the public to adhere to the guidelines and legislation to help restrict the spread of the virus.’

The police also worked with colleagues from the Regulatory Services Team at Guildford Borough Council to establish whether the venue breached any Covid-19 legislation and to offer further advice and guidance on being Covid 19 secure.

The Guardian reports that an email was sent to staff by the trust’s chief executive, Louise Stead, before the individuals returned to work.

It said: ‘All of the individuals involved are following the government guidance and are in self-isolation. A full track and trace of any patient contact has taken place and there is no evidence of transmission to patients at this time.

‘Our services continue to run safely, and patients can use these confidently and attend planned appointments and procedures.

‘As chief executive I wanted to write to you personally today to reiterate the serious nature of this and the need to follow government guidelines, including the rule of six people at one gathering, when outside of work. This is a stark and serious example of the need to uphold the correct behaviour at all times.’