England announces 19 more coronavirus deaths in hospitals in taking the UK total to 45,520 – but there are ZERO new victims confirmed today in Scotland, Wales or Northern Ireland

Another 19 people have died of the coronavirus in England, according to early statistics for today, taking the total to 45,520.

NHS England said another 19 people have died in its hospitals. But Wales, Scotland and Northern Ireland reported zero new victims.

The preliminary figure is calculated by adding up the fatalities reported by each home nation. The Department of Health will give a confirmed count at some point this afternoon which may be higher.

Government statistics show that the number of people dying with Covid-19 is continuing to tumble, with the daily average now 65 over the past week.

Today marked the eighth day in a row that no deaths have been recorded in Scotland and only one death has been counted in the past fortnight. Experts believe the country will be coronavirus-free by the end of summer.

However, the number of cases in the UK seems to be rising. The seven-day average has risen 10 per cent compared with last week. 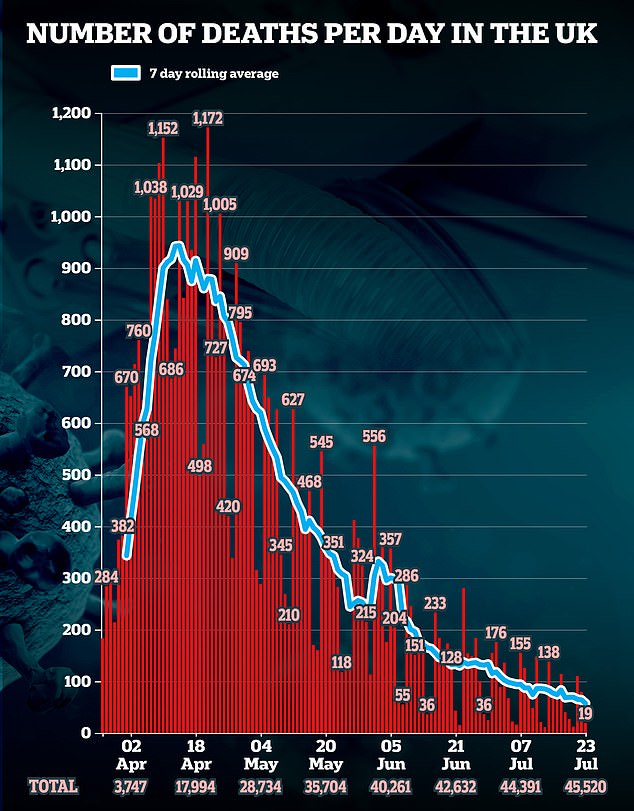 Another 19 people have died of the coronavirus in England, according to early statistics for today, taking the total to 45,520. No deaths were reported in Wales, Scotland or Northern Ireland

The Covid-19 daily death toll from the Department of Health, which only takes into account people who had a lab-confirmed positive test result, are supposed to be published at 2pm but usually take longer.

In its report yesterday, officials said a further 560 people had been diagnosed with coronavirus, and the seven-day average has risen 9.2 per cent in the last week.

There are now an average 638 people diagnosed each day, up from 584 seven days ago and from 546 a week before that on July 8.

The increasing average may be a sign the infection has started spreading again, confirming fears of top scientists that ‘Super Saturday’ would trigger a surge in cases — or it could be a result of more targeted testing.

Covid-19 fatalities have dropped to the lowest levels since well before lockdown.

There are growing concerns, however, that the virus could return and cause more death and disease in the winter when people are more susceptible.

The former health secretary Jeremy Hunt has today called for all NHS staff to be routinely tested for coronavirus to prevent a second wave in winter.

COVID-19 VACCINE WON’T BE READY UNTIL NEXT YEAR, WHO SAYS

Hopes for a coronavirus vaccine before Christmas have been dashed by a World Health Organization expert.

Mike Ryan, head of WHO’s emergencies programme, said the first use of a Covid-19 vaccine cannot be expected until early 2021.

He noted that several vaccines are now in phase three trials and none have failed so far in terms of safety or ability to generate an immune response.

A vaccine is considered crucial for getting out of the coronavirus pandemic because it would be the only way to secure protection against catching it.

Dr Ryan said: ‘We’re making good progress. Realistically it’s going to be the first part of next year before we start seeing people getting vaccinated’.

The WHO is working to expand access to potential vaccines and to help scale-up production capacity.

This will reassure staff they are not unwittingly carrying the virus, and because tests can produce false negatives, it is essential to carry them out frequently, he said.

The feat would involve swabbing up to a million additional people a week, and the Government is only testing around 2.3million people weekly, currently.

Scientists claimed this week that the NHS avoided testing its staff for coronavirus en masse because it was afraid thousands would have to go off sick and leave swamped hospitals without workers.

The health select committee heard from a slew of experts from SAGE on Monday who said  almost half of healthcare workers in the NHS — up to a staggering 45 per cent — were reportedly infected with coronavirus during the peak of the crisis in April.

In a letter to his replacement Matt Hancock and NHS England boss Sir Simon Stevens, Mr Hunt said nurses, doctors, cleaners and porters must be screened weekly starting from September.

It comes as experts at King’s College London warned there is a limited window to get the virus under control in the summer months before the cold weather potentially drives cases up again.

The figure is higher than that given by the Government because it includes the predicted number of people who have the virus in the community but are not tested.

The team says cases have remained stable over July for the UK as a whole, but appear to be ‘creeping up’ in the north of England.

Some 1,000 people are catching the coronavirus in the North every day, an increase on the 750 estimated last week.

The rise is too small to say definitively that the outbreak is growing once again but the scientists say they are watching the situation closely. 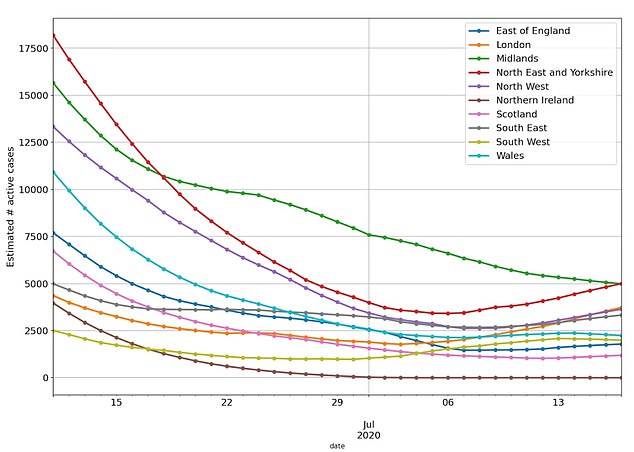 Covid-19 cases in Britain are barely dropping with almost 2,000 people still becoming infected each day. King’s College London says cases have remained stable over July for the UK as a whole, but appear to be ‘creeping up’ in the north of England

Data also shows there are an estimated 28,048 people in the population who are currently symptomatic, down slightly from the 26,000 the week before. The figure does not include care homes.

Professor Tim Spector, an epidemiologist at KCL and lead researcher behind the app, said app users were reporting worse outcomes from their illness than before, which he said may be linked to the colder, less humid weather.

He said: ‘[It] makes it even more important that we get this virus under control as we only have a month or two of warm weather left.

‘Our data suggests that levels have bottomed out at around 2,000 cases per day which is too many, so we all need to be conscious of the dangers and to continue to practice high levels of personal hygiene, wear a face mask, social distance and know all the signs of early disease.’

The authorities which have the highest estimates of symptomatic COVID in the past week include Wrexham, Rotherham, Kirklees and Blackpool.

At the top of the list is Blackburn with Darwen, where around 0.4 per cent of the population are estimated by KCL to have the virus.

Blackburn has overtaken Leicester — the first place in the UK to be hit by a local lockdown — to have the highest coronavirus infection rate in England. 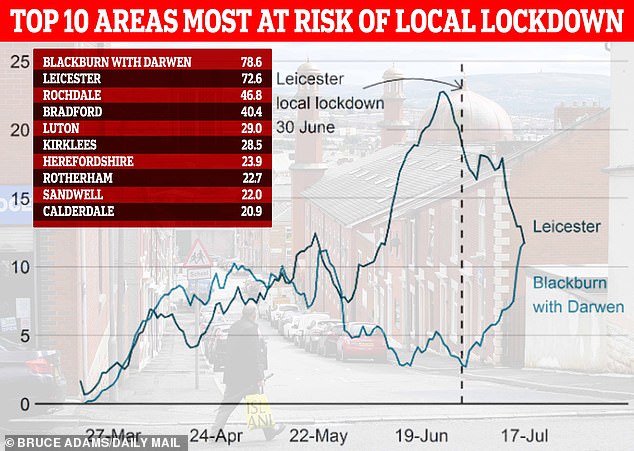 NHS Test and Trace is still failing to track down up to half of Covid-19 patients’ contacts in areas most at risk of local lockdowns (top ten, shown)

But concerning data revealed last night that the NHS Test and Trace is still failing to track down up to half of Covid-19 patients’ contacts in areas most at risk of local lockdowns.

CANCER PATIENTS WILL DIE BECAUSE THEY WERE ‘SCAREMONGERED’ AWAY FROM HOSPITALS

People suffering from treatable cancers will end up dying because of Government ‘scaremongering’ and an over-cautious reduction of NHS services, a nurse has warned.

The nurse, who wanted to remain anonymous, said that ‘hospitals were empty’ apart from Covid-19 wards and ICUs and that people died because of they weren’t treated.

She added that there was ‘no reason’ that cancer screenings and other routine treatments could not have continued throughout lockdown.

Her comments come after a Government report revealed that 200,000 people could die because of delays in healthcare and other economic and social effects all caused by lockdown.

Speaking on the Telegraph’s Planet Normal podcast, the nurse said: ‘We have a lot of deaths in my area but we’re going to have an awful lot more from cancers that are going undiagnosed and strokes that haven’t been treated.

‘It cuts both ways. We have hospitals that didn’t want to have patients come in and we have patients who don’t want to come in to hospital because of I think what’s been an awful lot of scaremongering from the Government, unfortunately.’

The district nurse said most NHS Trusts had enough PPE to have continued to operate ‘beyond the skeleton Covid system’ by mid-April.

She said that as soon as it became clear that the NHS wasn’t going to be overwhelmed by coronavirus patients, other services should have restarted.

And the nurse went on to criticise GPs who had chosen to only do telephone and video consultations.

She said that people who will die because of measures that were initially put in place to protect the NHS will include ‘young healthy people who had treatable cancers and treatable issues’.

The data, obtained by the Guardian, looked at contact tracing results from between May 28 and June 17.

It revealed thousands more potential patients in other areas of England with rising infections were being missed by the system.

For Blackburn with Darwen, which is being kept under review amid a surge in infections, at least 448 people were missed (46 per cent).

Similarly only 65 per cent of close contacts in Leicester – which had to retreat back into lockdown last month after a spike in cases – were tracked down by tracers.

It means 3,340 people who may have had the disease in the city slipped under the radar and could have spread it further through the population.

In Luton, which has the fifth highest infection rate in England, just 47 per cent of potentially-infected people were contacted by the system since its launch on May 28.

Language barriers may partly explain the low success rates in some of the worst-hit areas, where the virus is disproportionately affecting people of south Asian heritage.

In Luton, for example, 20 per cent of the population do not speak English as their first language, along with 27.5 per cent in Leicester, which has the highest rate in the country. In Blackburn it is 13.4 per cent, according to Statista.

Other potential explanations include a distrust of unknown callers, missed emails or people outright refusing to hand over contact details.

Local councillors and public health officials are now demanding more control over the test and trace process on the back of the ‘very concerning’ figures.

They say devolving power to local authorities could allow them to do door-to-door visits if contacts cannot be reached by other means.

The government’s Scientific Advisory Group for Emergencies (SAGE) has said the system must aim to reach 80 per cent of close contacts and get them isolated within 72 hours for the programme to work.

However, official data published today showed call handlers are still failing to reach almost a quarter of close contacts of positive Covid-19 cases in England to tell them to self isolate.

More damning statistics today published by the Department of Health show NHS Test and Trace is failing on one of its most important measures – testing people quickly.

Prime Minister Boris Johnson had promised that all results would be delivered within 24 hours of someone taking a test, but the service has again missed the target.

Between July 9 and July 15, the proportion of people getting their results within a day was 46.8 per cent, down from 50.6 per cent between July 2 and July 8.