England, Scotland and Wales have announced another 589 coronavirus victims today, taking the total number of fatalities in the UK to 18,689.

A full UK-wide roundup including Northern Ireland deaths and the numbers of new positive tests is expected this afternoon.

The Government had hoped to keep the number of victims to 20,000 or lower but is on track to hit that by Sunday – it is taking, on average, just two days for the count to rise by 1,500 using hospital deaths alone.

The update comes as rifts are emerging in Government over when the UK will start to move out of its current lockdown state when the coronavirus infection rate falls.

Conservative MPs have warned the Government it must put its faith in the public to be responsible and spell out how and when the nationwide shutdown will start to ease off.

Scottish First Minister Nicola Sturgeon, who gives her daily briefings hours before Downing Street, today said she does not expect Scotland to return to normal this year.

She indicated she was willing to ease restrictions without Whitehall’s approval but said vulnerable people would have to continue to be shielded and large gatherings of people would not be allowed ‘for some months to come’. 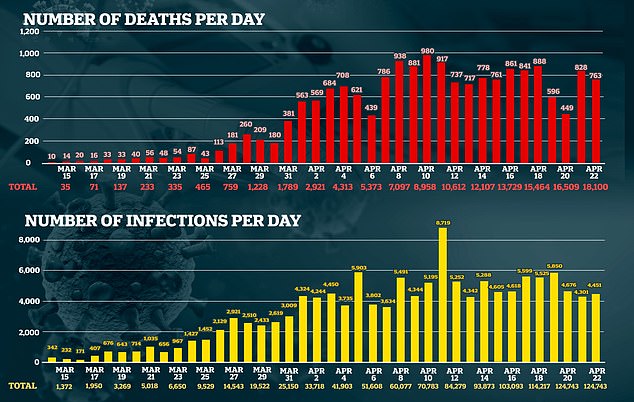