Britons across the country saw thermometers rise to the high teens on Monday but due to the arrival of a mini heatwave, temperatures are expected to soar to the high 20s on Wednesday. The expected temperatures would surpass the previous record high this year of 26C in Treknow, Cornwall on Good Friday. Although there will be some patches of rain in the north and Scotland, the Met Office has reported the outlook will begin to improve from tomorrow.

With a band of warm weather arriving from southern Europe, temperatures will be at their highest on Wednesday.

Following the blazing sunshine, the UK will see the arrival of rain as tropical storms hit the country by the end of the week.

As the Met Office’s meteorologist, Alex Deakin reported, after a damp start on Tuesday morning, temperatures will rise to well above average for this time of year from the afternoon onwards.

He said: “Temperatures will be above average maybe rising up to 24C maybe 25C in the capital. 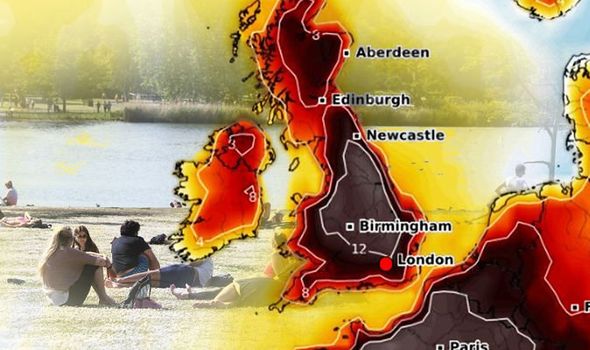 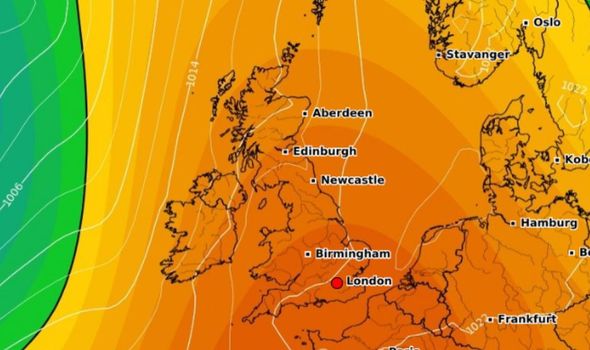 “And for many, it will be dry and warm again with plenty of sunshine on Wednesday.”

He added: “It will be a dry story with increasing amounts of sunshine on Tuesday.

“High pressure will build on Wednesday where will see the heat building. 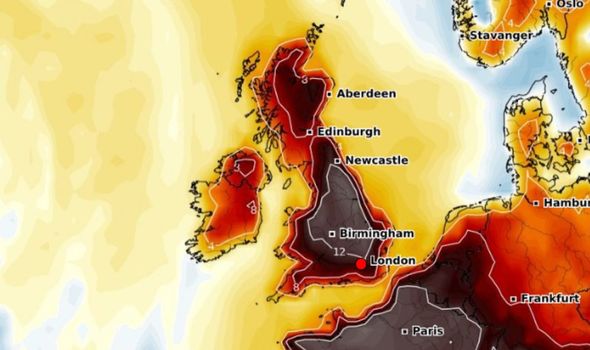 “Warm air from Spain and France will lift the temperatures.

“This is where we see the peak of the warm weather with some areas seeing 27C or 28C in parts.”

London will see the highest of the temperatures while even northern parts of Scotland will see the mercury rise to 17C. 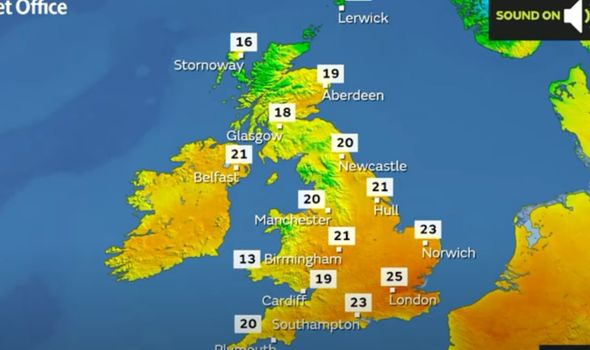 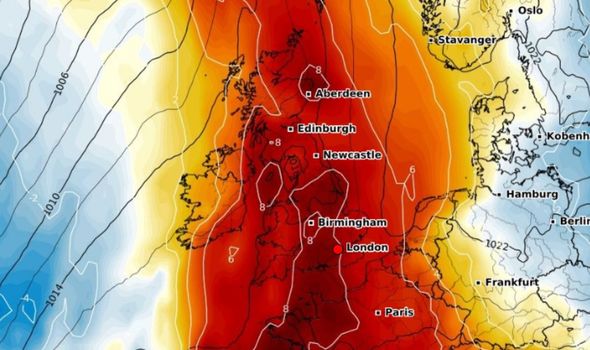 Nick Finnis from Netweather said: “High pressure close to the south today and tomorrow expands further north on Wednesday, so probably the sunniest day of the week UK-wide, with much of the north that’s been cloudy brightening up too, with much of Britain dry and sunny.

“The warmest day of the week too, as we draw in a southerly flow off continental Europe, temperatures widely reaching the low 20s Celsius from the central belt of Scotland southwards, mid to high twenties across central, southern and eastern England.”

Although the UK will see blistering temperatures this week, heavy showers are expected to end the week.

With the arrival of remnants from Storm Arthur, the cooler and wetter conditions will sweep across the country on Friday.

The storm’s remnants are expected to hit the northeast and west of Scotland on Friday.

Netweather added: “We will start to see a breakdown from the west to the fine and warm conditions on Thursday, as a cold front sweeps in from the west. 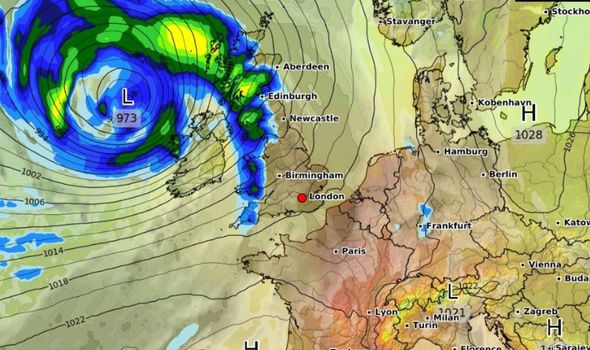 “We may see some thunderstorms break out across central and eastern areas ahead of this front – where very warm air will hang on, the front will bring a band of cloud and a little rain east, then turning cooler but sunnier again behind the front across northern and western areas.

“A deep low, spawned by the remnants of Tropical Storm Arthur, will sweep northeast past the west of Ireland and west of Scotland on Friday, bringing cooler and windier conditions behind a cold front which will bring a band of cloud and a little rain eastwards, followed by blustery showers and gales in the northwest.”