The UK has basked in hot weather this month, with more on the way over the coming days. While showers and wind will break up the heat at various points, areas such as Surrey and London will scorch in 25C highs on Friday as Atlantic heat from Portugal, according to Netweather’s hot weather maps.

Paul Michaelwaite at Netweather said: “Looking ahead to the start of next week, the friend of UK summers; the Azores high will ridge in from the southwest.

“So there’ll be plenty of fine, dry and warm weather.

“It’ll struggle to exert its influence to northern Britain at times though, with weather fronts bringing some rain in from the northwest on Tuesday and into midweek.”

He added this weekend is also experiencing highs of 27C in southern regions. 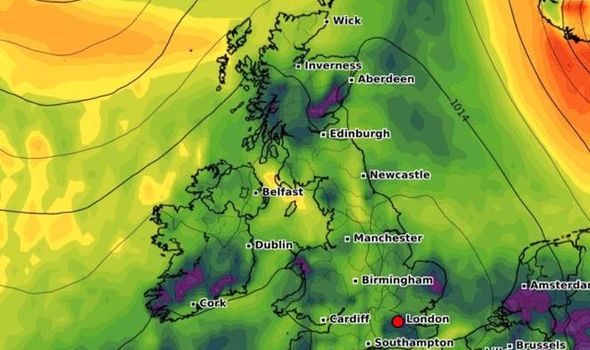 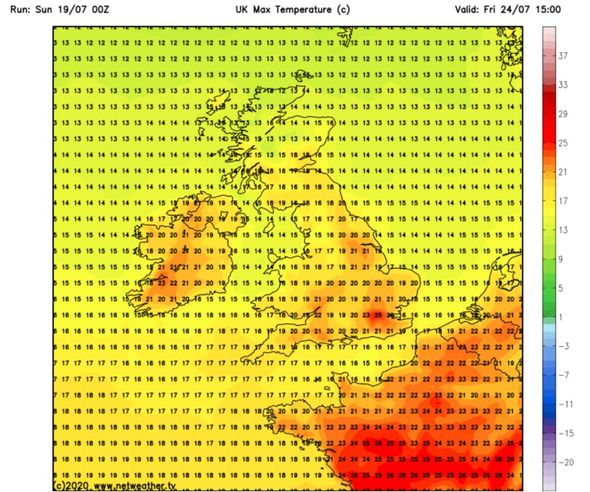 Mr Michaelwaite said: “Temperatures on Saturday will peak at 24-27c across southern and southeast England, including East Anglia.

“15-19c will be typical elsewhere, with the lower end of that scale in western parts of Wales and Northern England under the thicker cloud.

“Overnight, it stays muggy in the southeast but cooler and fresher elsewhere with lows dipping into single figures from northern England northwards.”

He added Sunday will be hit with moderate highs of 21C in many parts. 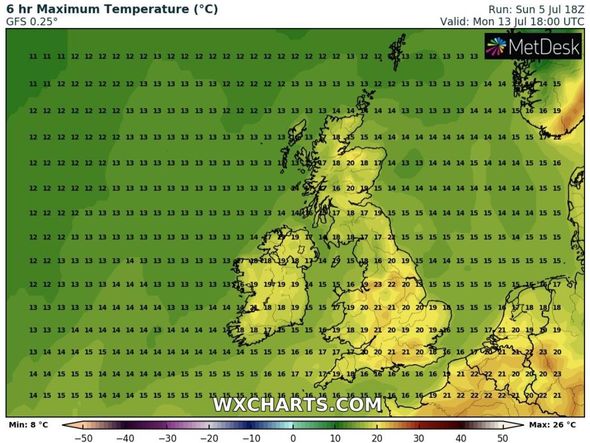 He said: “By Sunday, a good part of England and Wales will see highs rise to 18-21c under often sunny skies.

“The southeast, with more cloud, will be cooler, as will Scotland and Northern Ireland with the mid-high teens more likely.

“The sunshine will be interrupted by showers at times across the northern half of the UK though, and that southeast corner will stay under the front with patchy, showery rain coming and go through much of the day.” 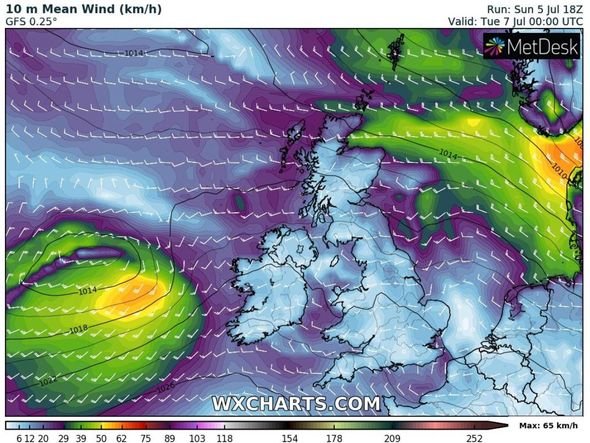 It said on Sunday morning: “Early cloud and outbreaks of rain over southern England and East Anglia slowly becoming confined to far southeast England. Otherwise, sunny spells but also a few showers in the north.

“Tonight, rain clearing the southeast then a cool night expected with good clear spells. A few showers continuing in the north.

“Monday: A mostly dry day for England and Wales and feeling warm in sunshine and light winds. Showers in the northwest developing further over Northern Ireland, Scotland and perhaps northern England.

“Outlook for Tuesday to Thursday: A few showers for the north Tuesday, otherwise dry. Rain reaching the north Wednesday then edging slowly south. The far south may stay dry and here it will become warm.”