More than 100 protesters were arrested at the heavily-policed DSEI, which took place in September 2017 in London. 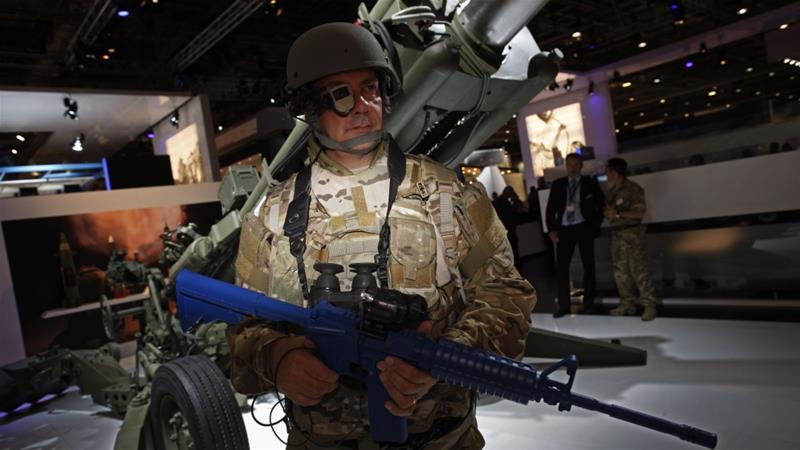 The UK spent more than $1m on providing security for the world’s largest weapons fair, Al Jazeera reveals, in an operation campaigners say undermined the rights of anti-war activists.

A Freedom of Information Request submitted by Al Jazeera to London’s Metropolitan Police Service (MPS) has revealed the cost of policing Defence and Security Equipment International (DSEI), which took place in September 2017, ran to 977,000 pounds ($1.3m), including $215,000 in overtime payments to officers.

More than 100 protesters were arrested in London outside the event, the majority of whom have since been acquitted in a series of trials expected to conclude next month.

Sophia Lysaczenko, one of the 108 protesters arrested by the MPS during last year’s week-long anti-DSEI demonstrations, told Al Jazeera that officers had created a “hostile environment” near the exhibition.

“The only thing police were there to do was to make sure the roads were clear [but] … they were even arresting people for holding banners and congregating by the side of the road near the weapons fair,” said Lysaczenko.

“They [the police] didn’t want to know anything about the protest, they didn’t seem to want to engage with us or even [to] check the vehicles carrying weapons into the fair.”

A small group of protesters attempted to stop vehicles entering the fair by standing in the middle of the road leading to the Excel Centre, where the event was being held, Lysaczenko added.

Around half of the 87 protesters who were charged following arrest – including Lysaczenko – were taken to trial. 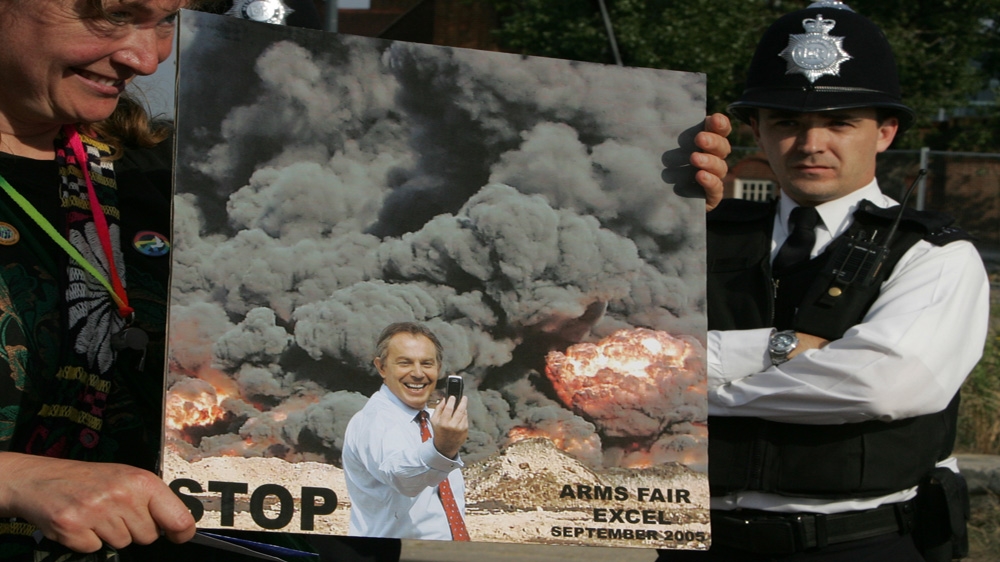 Most were accused of “obstructing the highway”, a minor offence which carries a fine of up to $1,400.

Lysaczenko, along with the majority of those who were tried, has been acquitted.

At least one verdict suggested the defendants were innocent, in line with Article 11 of the European Convention on Human Rights, which states that “everyone has the right to freedom of peaceful assembly and to freedom of association with others.”

“It caused minimal disruption and [we said] it’s the only way they could get publicity for this [cause] because the government aren’t going to do anything as they’re complicit [in the arms trade],” Chada said.

Police told Al Jazeera that, while officers aim to “facilitate peaceful protests”, they also have a duty to “minimise disruption” for other members of the public.

“The Metropolitan Police Service proportionately responds to any protest activity, balancing the rights of those protesting with the rights of others to go about their normal business unaffected,” said a spokesperson, who requested anonymity.

Andrew Smith, a spokesperson for the UK’s Campaign Against Arms Trade (CAAT), told Al Jazeera the police’s handling of the anti-DSEI demonstrators was “shameful.

“It was totally inappropriate and heavy-handed, with [more than] 100 people being arrested for standing up to arms dealers and dictatorships,” Smith said. “It’s time that arms fairs like DSEI were shut down for good.”

Held every two years in London, DSEI is advertised as a “world-leading” weapons event which typically draws in some 1,600 exhibitors from more than 40 countries.

“DSEI supports the Ministry of Defence’s (MOD) procurement needs as well as Britain’s defence and security industry, which has a turnover of over [$50.7bn] and employs 233,400 people directly, including over 7,000 apprentices,” the spokesperson said.

The fair provides the UK with an “effective platform”, the spokesperson added, to showcase its military products to foreign customers in a “legitimate … well-regulated environment”.

According to the Department for International Trade (DIT), UK defence exports totalled $8.2bn in 2016, up from $6bn a decade ago. 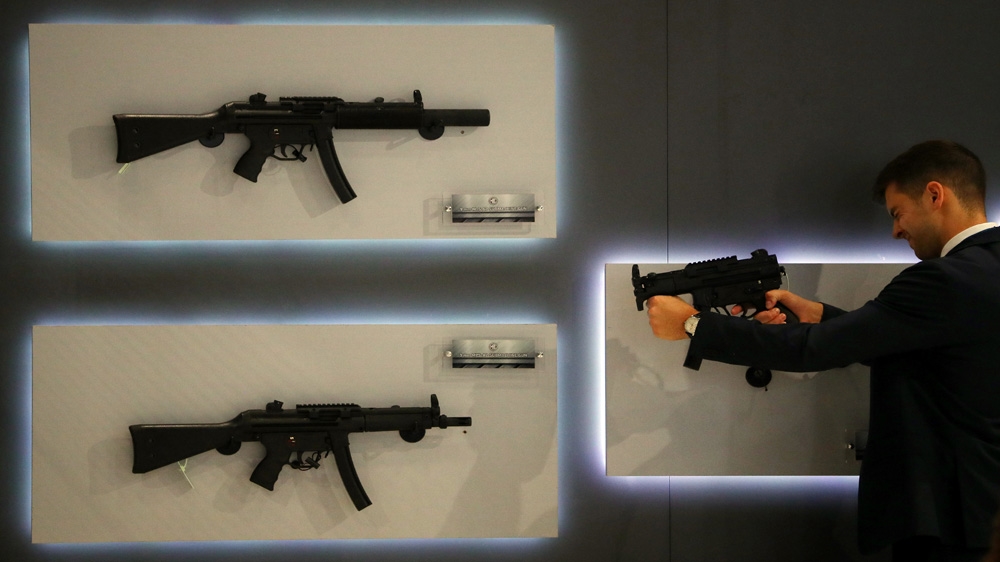 Michael Fallon, who was secretary of state for defence when the fair took place, had said the UK was seeking to increase sales of weapons.

“As we look to life post-Brexit and seek to spread our wings across the world, it’s high time we do more to compete for a share of this international [arms] export market,” Fallon said during his keynote speech at DSEI.

A spokesperson for the DIT, speaking on condition of anonymity, told Al Jazeera the government is committed to supporting British companies and jobs in the defence sector, including at events like DSEI.

However, anti-arms trade campaigners who have demonstrated against the exhibition say that weapons are being advertised, and sold, to governments guilty of committing human rights abuses.

“DSEI is the embodiment of the arms industry … [and] the arms dealt there could be used in atrocities for years and years to come,” Smith told Al Jazeera.

“The activists who were arrested [at DSEI] were protesting against one of the world’s biggest arms fairs, which was attended by some of the most brutal and repressive regimes in the world,” he said.

Representatives from Saudi Arabia, Egypt, Bahrain, Pakistan and the United Arab Emirates (UAE) attended DSEI at the invitation of the DIT, despite the UK’s Foreign & Commonwealth Office (FCO) identifying all of these countries as “human rights priority countries” in its 2016 Human Rights and Democracy report.

The DIT spokesperson told Al Jazeera the government carried out a “stringent process of scrutiny and approval” before issuing invites to UK defence exhibitions.

UK arms sales to Saudi Arabia have drawn the sharpest criticism from protesters, with the alarm raised further last week during a three-day visit by the kingdom’s crown prince to London.

Activists, including CAAT, allege the UK is complicit in the deaths of thousands of Yemenis, with the kingdom using UK-made weapons in the ongoing conflict.

In total, more than 10,000 people have died in Yemen since March 2015, when the conflict between a Saudi-led coalition and Houthi rebels began.

The UK has licensed more than $6.4bn worth of arms sales to Saudi Arabia since the start of the war in Yemen, according to CAAT figures. 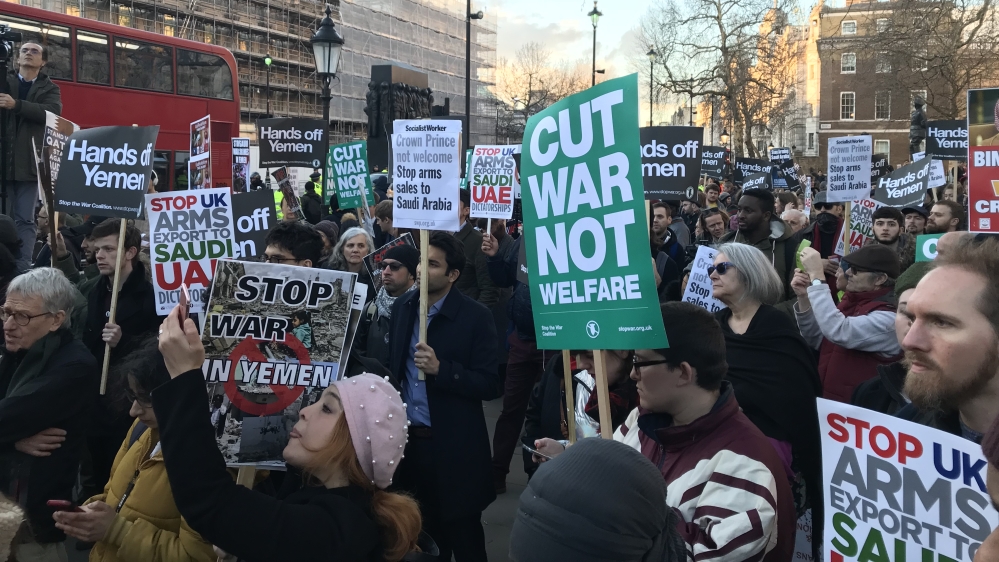 According to polling carried out by CAAT, however, only 6 percent of UK adults support UK arms sales to Saudi Arabia.

Rebecca Johnson, director of the UK-based Acronym Institute for Disarmament Diplomacy, said the licenses represent an “egregious” hypocrisy “both [because] of the amount that we export to them [Saudi Arabia], and the use that they put our weapons to in Yemen.

“[The government] provides aid to helping countries bombed by some of the UK’s largest arms recipients,” she told Al Jazeera.

According to the Department for International Development, the UK will provide $285m worth of humanitarian aid to Yemen this financial year.

“There’s a clear contradiction between the government’s apparent advocacy of human rights, and its actual promotion of a whole cross-section of weapons and defence equipment to governments and regimes that have abused human rights and cause human misery,” Johnson said.