The UK is set to revise its holidays green list next week and parts of Spain and Greece could make the cut for summer freedoms.

The lockdown ban on international travel came to an end on May 17 but only a handful of countries were on the no-quarantine travel list – namely Portugal, Iceland and Gibraltar.

Next week, on June 3, ministers will reconsider whether it’s safe for Brits to go to different destinations and any rule changes will come into action on June 10.

Malta and the Balearic Islands, as well as some Greek islands, could find themselves on the list, The Independent reports, and Spain’s tourism boss is hopeful that the travel to more of the country’s territory could be on the cards soon.

The mainland and Italy and France are unlikely to make it onto the green list this time, however, because they still have higher infection rates than the UK.

Ministers are judging the safety of countries based on their numbers of cases, vaccination progress and risk of new variants emerging.

Transport Secretary Grant Shapps last week hinted that the green list could be expanded in the coming weeks but has said only that it was a hope, not a certainty.

Travellers coming in from green list destinations do not have to quarantine when they arrive back in Britain. Those returning from amber list countries have to self-isolate at home for 10 days, while red list travel is not allowed. 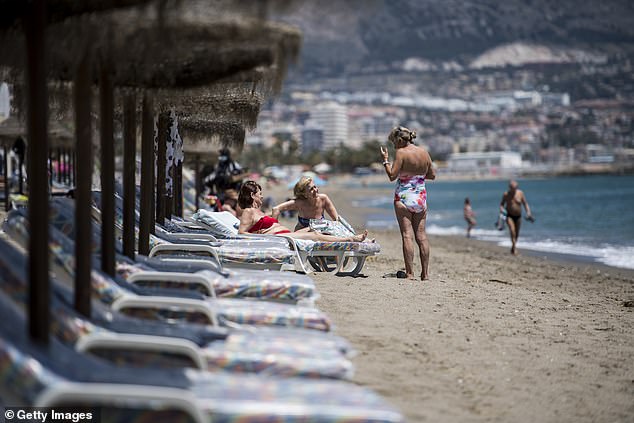 Spain’s tourism minister said he hopes some of the country will make it onto the UK’s green list. Spanish authorities are allowing Brits to travel into the country without quarantining but UK rules mean people have to self-isolate when they return and the Government is advising against travelling there (Pictured: Women on a beach in Fuengirola on the Costa del Sol) 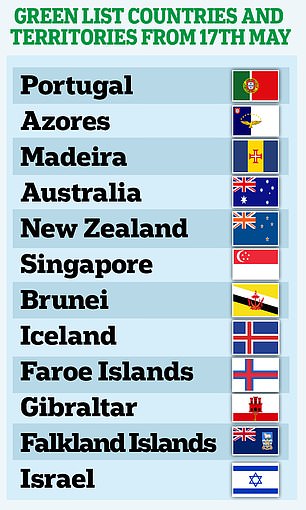 Travel chiefs are pushing for holidays abroad to get back to normal as soon as they can after airlines suffered crippling financial losses last year.

EasyJet boss John Lundgren said: ‘You have a number of countries in Europe that are now on the amber list that should go into the green list.’

Ministers committed to regular three-weekly reviews of the traffic light list and will do their first re-assessment on June 3, the Independent reported, with changes starting a week later.

Top candidates for the green light are expected to be Malta; the Balearics which include Mallorca, Minorca, Ibiza and Formentara; Tenerife and Greek islands such as Rhodes, Kos, Zante and Santorini.

Spain’s tourism minister, Fernando Valdes, said he hoped at least parts of the country would be put onto Britain’s green list.

The country has already opened its doors to people from the UK, but travellers would have to quarantine for nearly two weeks when they got home from their holiday.

In most places on the green list already – particularly Australia and New Zealand – travel home to Britain is fine but the foreign governments won’t let Brits in.

The fast-spreading Indian variant is now dominating in Britain and many countries are only just coming out the other side of the Kent strain taking over, meaning they will be wary about importing cases from the UK.

Mr Valdes said: ‘With our notification rates which are pretty low and by the same notification range of the UK, so I have to suspect that on the next review that the UK Government can provide… Spain is going to change on its notification.’

Crowds were pictured flocking to airports for the first time in months when flying abroad became legal again in May, but most are holding off on holidays.

Top scientists have said they would avoid international travel and government ministers have discouraged it, urging people to make plans at home instead or, if they do want to go abroad, to stick to green list nations.

On Monday Business Minister Anne-Marie Trevelyan said on Times Radio: ‘The reality is, at the moment, amber countries are still not meeting the criteria for our scientists to say that they should be green.

‘So the recommendation remains “don’t go unless you have to”, and remember that, if you do go, you will have to quarantine for 10 days and that will be monitored.’

Grant Shapps told BBC Radio 4’s Today last week: ‘The amber list and the red list are not for holidaymakers, that’s not the purpose of those lists at this time.

‘We just think that after a year of lockdowns in this country, of people coming forward in record numbers to get their vaccines, we do not want to be in a position of taking risks at this stage about our unlock.’

Asked if he was pushing for the green list to be extended he said: ‘Of course. The reason for that is we have ended up getting way ahead in terms of our vaccination programme in this country and we are just having to wait for other countries to catch up with us.

‘That’s going to gradually happen, obviously, you can see it’s happening, so that list should expand.’

Mr Shapps added: ‘We are reviewing this all the time, every three weeks, the next review is in the first week of June and we’ll have to see what happens.

‘Our message is very straightforward, which is “just a little bit of patience, everyone”.’